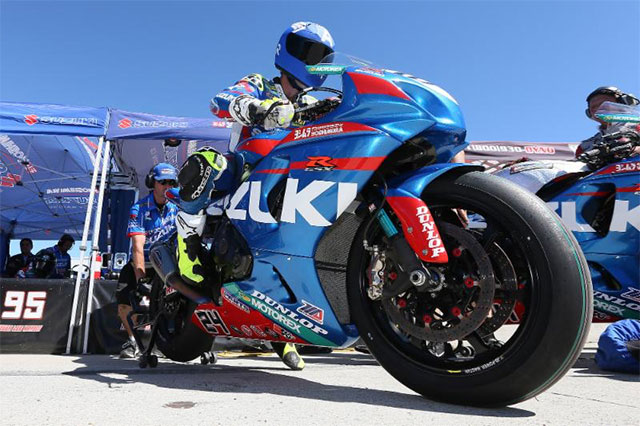 Yoshimura Suzuki's Toni Elias earned his second successive MotoAmerica Superbike pole position and the second of his debut season in the series on a sunshine-filled afternoon at Mazda Raceway Laguna Seca during qualifying for tomorrow's Honda Superbike Challenge of California.

And he needed one of what he called the best laps of his storied career to get the job done.

This round marked the first time that the Superpole riders were given the chance to use two ultra-soft Dunlop qualifying tires and the top men made the most of it. None more so than Elias, however, the diminutive Spaniard ripping off a 1:23.619 on his second go on a soft tire - a lap time well under last year's pole position time of 1:24.538 set by Josh Hayes.

Elias, a Moto2 World Champion and a MotoGP race winner, called it one of the finest laps of his career.

"I'm happy because we try to make a good job all weekend, working for the race, but every time we put a new tire (on) I found traffic," Elias said. "I knew this wouldn't happen on the Superpole because we are only 10 riders in the track. We decide to go straight to the first qualifying (tire). I didn't know why, but I didn't have grip. Maybe I wait too much. I don't want to use too much the tire and when I decide to push, it was cold. The second qualifying tire was perfect. It was a shame that I make a mistake in the Corkscrew and in the last corner because that was one of my best laps in my career is what I feel. But finally it was enough to have the pole and I didn't expect that."

It was close at the top with Elias besting Monster Energy/Graves Yamaha's Cameron Beaubier by just .004 of a second in taking pole. Beaubier also did his best lap on the second qualifying tire.

"I found it very beneficial using two tires because I messed up the first qualifying lap I had and I was able to get a second chance at it," said Beaubier, who leads the MotoAmerica Superbike Championship by 25 points going into Sunday's two races. "It wasn't enough. Toni (Elias) ripped off a really good lap there. I got close, but it wasn't enough to take pole. Other than that, I feel good with our race set up and I feel good on race tires. I was getting pretty frustrated with traffic in our first session today and both sessions yesterday so it was nice to finally have some clear track in Superpole to focus on myself instead of the other guys around me. I'm ready to go racing."

The front row for Sunday's races will be filled by Yoshimura Suzuki's Roger Hayden, the Kentuckian also close to his teammate and trailing by just .241 of a second.

"It's not really trying to follow, it just seems like there are a lot of guys out there," Hayden said of some traffic issues during the three practice sessions held prior to Superpole. "This morning I tried to put a lot of laps on a tire and I got four good ones (laps) and the last five I counted 10 guys in front of me. It's a little bit of a pain and it's hard to get in a rhythm, but I did like the two qualifiers. I was a little worried about the front tire being a little cool so I kinda knew what to expect. At the other tracks you use a qualifier and you're always like 'Oh, I wish I would have gone in deeper or got on the throttle harder,' so I think it (having a second chance) helped lower the lap times for sure. I just have to try to decide what tire to use tomorrow and I'm looking forward to a long race."

Broaster Chicken/Roadrace Factory's Jake Gagne had his best qualifying effort of the season to lead the second row. Gagne didn't crack into the 1:23s, but his 1:24.563 was good enough to put him fourth and ahead of four-time Superbike Champion Josh Hayes, the latter ending up fifth with a best of 1:24.580. The second row of the grid will be filled by the fastest of the Bazzaz Superstock 1000 riders, Danny Eslick. Eslick rode the TOBC Yamaha to a lap of 1:24.873.