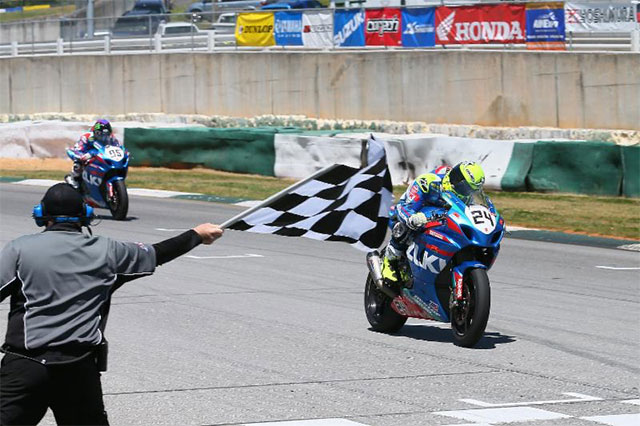 Yoshimura Suzuki's Toni Elias won his third straight race to start his debut season of racing in the 2016 MotoAmerica AMA/FIM North American Road Racing Championship, but defending series champion Cameron Beaubier turned the tables in race two as his miserable luck of the new season finally turned for the better at Road Atlanta.

Elias may have won race one in the Suzuki Superbike Shootout of Georgia after Beaubier was knocked out of the lead in a two-rider crash with his Monster Energy/Graves Yamaha teammate Josh Hayes, but then it was Elias' turn to show a chink in his armor as he crashed out of race two.

With Elias, Hayes and Beaubier all suffering crashes, the man who emerged from Road Atlanta with the biggest smile on his face was Roger Hayden, the Yoshimura Suzuki rider leap-frogging to the top of the championship table after two rounds and four races. Hayden, with his four podium finishes in four races, heads the points table with 76 points - one better than his teammate Elias. Hayes is third with 52 points and Beaubier, who is 38 points behind Hayden, is all the way back in seventh. But it could have been worse for the defending champion if Elias had finished race two.

Both races were thrillers with the top four together for the majority of both. Leading on the 13th lap, Beaubier was hit from behind by Hayes and the pair tumbled off into the gravel on the exit of turn 10B. Hayden took over at the front, but Elias was with him and with a few laps to go the former World Champion took over and held on to win by .343 of a second.

"My plan was not this one," Elias said. "I'd been surprised at the beginning. In turn one I had been struggling a lot all weekend. I wasn't surprised when Roger (Hayden) passed me. Today in warm-up he was really fast. He could stay with us for the race and he showed me on the second lap.

"After that I made a mistake and I lose one second, one second and a half, and in two laps I could catch the group again and that gave me a lot of motivation. I could catch again, especially the last section, but I suffer all day. I try to keep calm and try to not come too tired, I have arm pump. Finally, I push and where I want to pass Roger every lap was yellow flags, yellow flags, yellow flags. I did my best and he was there all the time. We got lucky because the Yamaha guys crashed and I'm sorry because they had good rhythm." 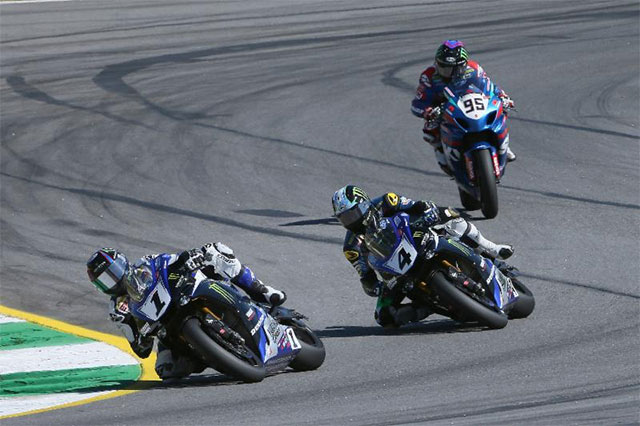 In race two Beaubier wasn't to be denied, the Californian battling with his teammate Hayes for the duration with Hayden lurking in their shadow. Elias was with the three until running through the grass in the esses, first falling back and then starting to reel the lead trio back in. But things went bad for the Spaniard on the 14th lap as he crashed out of fourth place in turn six.

Beaubier fought off Hayes's challenge to win by .415 of a second with Hayden a close third. It was the 12th Superbike win of Beaubier's career, which puts him in a tie with MotoAmerica rider representative Doug Chandler for 14th on the all-time list.

"At the time, I'm not gonna lie, a little bit," Beaubier said when asked if he wanted to smack Hayes after being struck from behind by his teammate in race one. "It happened. Obviously, Josh has been racing for a long time, I look up to the guy and he would never do that on purpose, obviously. It's just something I want to put behind me and move on.

"We're both safe, we're both good. Obviously, it sucks that we didn't get any points out of the race, but it's just time to move on. I'm really happy to get on the podium and to get a win after the disaster of a weekend we had in COTA and in the first race. All in all, I felt good and it was an awesome race. It was pretty fun dicing back and forth with Josh and I knew Rog was right there behind us too. It seemed like Josh had his spots and there were spots where I knew I was better than him. It felt good to actually pass Josh decently on the brakes too because I've struggled with that in the past."

Fourth place went to Herrin, the Georgian taking top Bazzaz Superstock 1000 honors in the process as it was his turn to head the pack of Corti, Fong and Gagne across the line. Gillim and Morais rounded out the top 10.

Fong continues to lead the Bazzaz Superstock 1000 with 66 points to Herrin's 56 points. Corti is third with 45 points.

The MotoAmerica Series returns in two weeks with round three at New Jersey Motorsports Park, April 28-May 1.