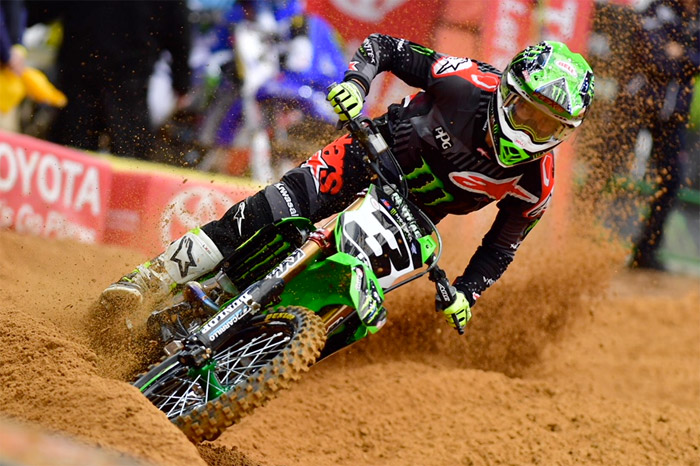 Eli Tomac and Joey Savatgy have made it a green sweep at the first every Monster Energy Triple Crown event at the third round of the Monster Energy Supercross championship held at Anaheim today.

In the 450 Class it was Factory Honda‰Ûªs Cole Seely who fired the first shot of the night, taking the opening main event win ahead of fellow Honda rider Justin Brayton KTM mounted Blake Baggett, while championship leader coming into the event, Rockstar Husqvarna‰Ûªs Jason Anderson recovered from a bad start to eventually finish in 7th position, while Tomac who was returning after missing last week due to a shoulder injury finished 5th.

Tomac made his move for the nights overall win when the gates dropped on main event two, quickly making his way to the lead.

Seely moved into second before closing the gap to Tomac and put pressure on the #3 plated rider challenging for the race lead, however it was not to be with Tomac taking the race win ahead of Seely.
Behind them Anderson was once again on a charge, working his way through the field for the second straight race to finish third ahead of Josh Grant in 4th and Monster Energy Factory Yamaha‰Ûªs Justin Barcia.

Tomac looked like he was going to make it back to back main event wins when he grabbed the holeshot in the final race, but Anderson had other ideas, final getting a start himself, closing in on Tomac before making a decisive pass and running away for the final race win of the night.

Points leader for the night leading into the final race, Cole Seely got off to a shocker of a start and had his work cut out to take his second ever overall 450 Supercross round win.

Aussie Chad Reed managed a 12th in the first race to finish the night 14th overall.

In the championship standings, Jason Anderson increased his point‰Ûªs lead to 11 points over Cole Seely who moved into second position on the back of tonight‰Ûªs performance.

Justin Barcia sits one point further back in third. 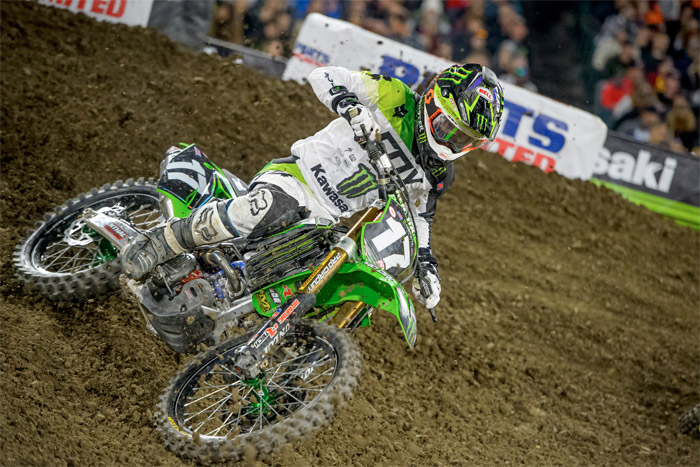 Joey Savatgy will carry the red plate into round four after winning round three tonight - Credit: Kawasaki Racing.com
In the 250 West Class Joey Savatgy showed the field how to go about the triple crown format with a fine 1-2-1 result for the night to come away a clear round winner.

Troy Lee Designs KTM racer and opening round winner Shane Mceltrath put in some great come from behind rides to finish the night in second overall, that also including a win in the second main for the round.

Geiko Honda‰Ûªs Christian Craig held on to a podium result, finishing the night third, just ahead of Pro Circuits, Adam Cianciarulo in 4th and Yamaha‰Ûªs Mitchell Oldenburg in 5th.

Championship leader coming into the night, Aaron Plessinger could not get out of the gate in any of the three main events, making for a long night of making passes, eventually finishing in 6th position, one spot ahead of Australia‰Ûªs Hayden Mellross in 7th aboard his 51 Fifty Energy Yamaha YZ250F.

In the championship standings, Savatgy and Mcelrath are now tied at the top with 68 points a piece, with Plessinger two points back in third.

Round four of the championship will head to Glendale next Saturday the 28th of January.