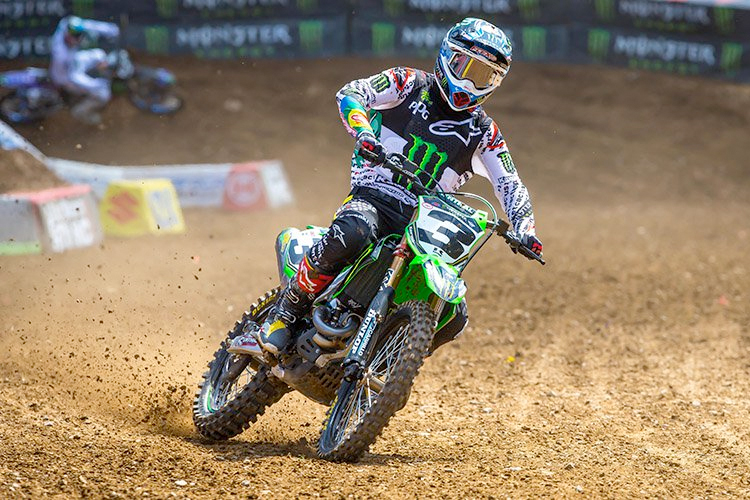 Eli Tomac on his way to an unlikely win at Nashville after a trip through the LCQ
Monster Energy Kawasaki's Eli Tomac has renewed his championship hopes after taking the win at the 14th round of the 2019 Monster Energy AMA Supercross Championship in Nashville.

Red Bull KTM's Championship leader Cooper Webb shot out to the lead early after grabbing the holeshot and was closely followed by team-mate and nearest championship rival, Marvin Musquin as the opening lap came to a close.

Disaster then struck Musquin with French racer crashing heavily in the whoops and relegating himself back to near last position.

Up front Monster Energy Kawasaki's Joey Savatgy and a fast charging, Ken Roczen aboard his Factory Honda were closing fast on race leader Webb, when a mistake from Savatgy took both riders down. While Roczen was able to eventually rejoin the race at the rear of the field, it was night over for Savatgy with what looked to be an arm injury of some type.

The pressure on Webb at the front continued, however, with Tomac working his way into second position before making light work of Webb and clearing off to take a comfortable race win.

It was an unlikely win for Tomac who had a drama filled night with his 2019 Kawasaki KX450F coming to a halt while he was leading his heat race, forcing him to the last chance qualifier. In the LCQ Tomac's bike o started blowing smoke, but held on to the finish, allowing the current American motocross champion a path into the night's main event.

"The trip through the LCQ, kept me warmed up and fired up at the same time," Tomac said from the podium. There was some adversity there, but we were able to recover.

"Qualifying today wasn't so good, I was a bit behind and not quite myself. I was leading that heat race, and we saw what happened there, and we went to the LCQ and got through that.

"That main event was something else, I was a little fortunate with a couple of crashes out there, but I felt good throughout that whole main event there, which is the most important thing, I made gains out there." 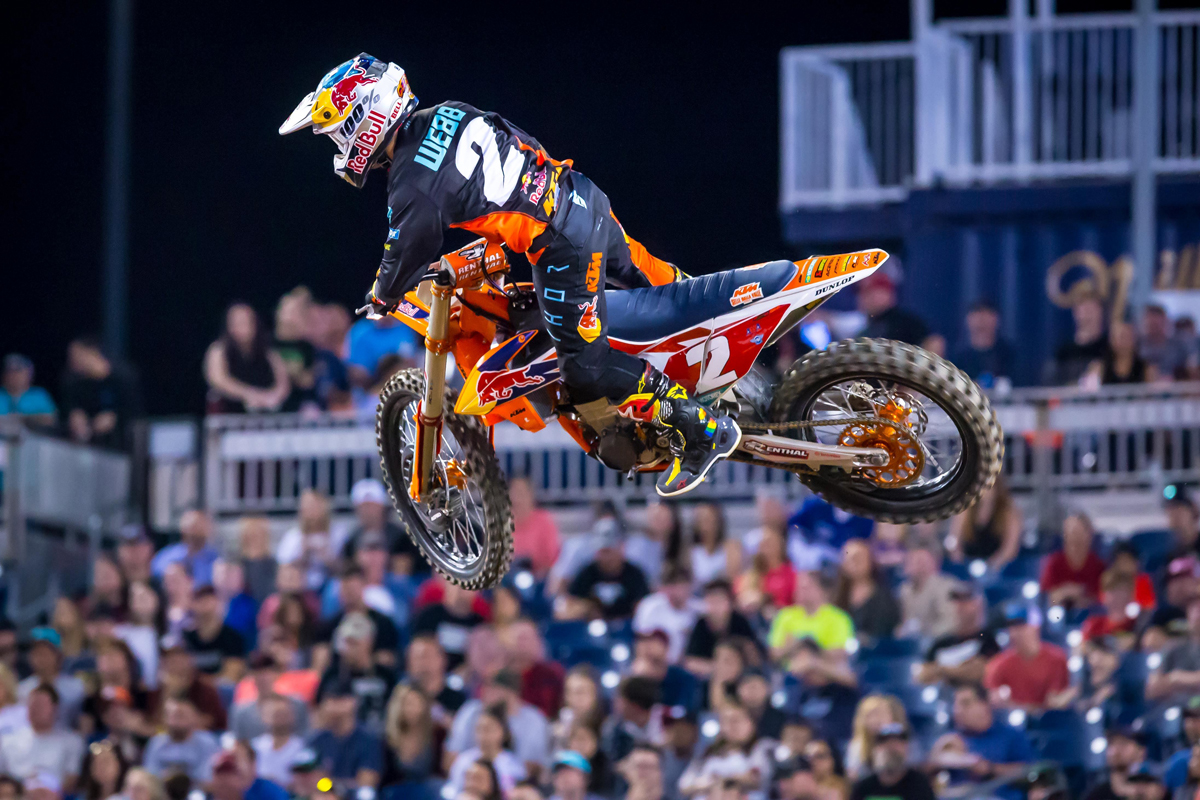 Cooper Webb continues to lead the championship by 21 points with three rounds remaining
Rocky Mountain backed KTM racer Blake Baggett stalked Webb for second position and after sitting behind the championship leader for numerous laps, pulled the trigger, making a move into second where he would eventually finish, with Webb holding on for the final position on the podium.

‰ÛÏIt was nice to get the holeshot and lead some laps in the Main Event. I made some mistakes and got passed by Eli and Blake ‰ÛÒ they were both riding really good tonight. I‰Ûªm keeping the bigger picture in mind, and a podium finish isn‰Ûªt too bad, we were able to take away some points and extend the lead a little bit heading into the last three rounds.‰Û 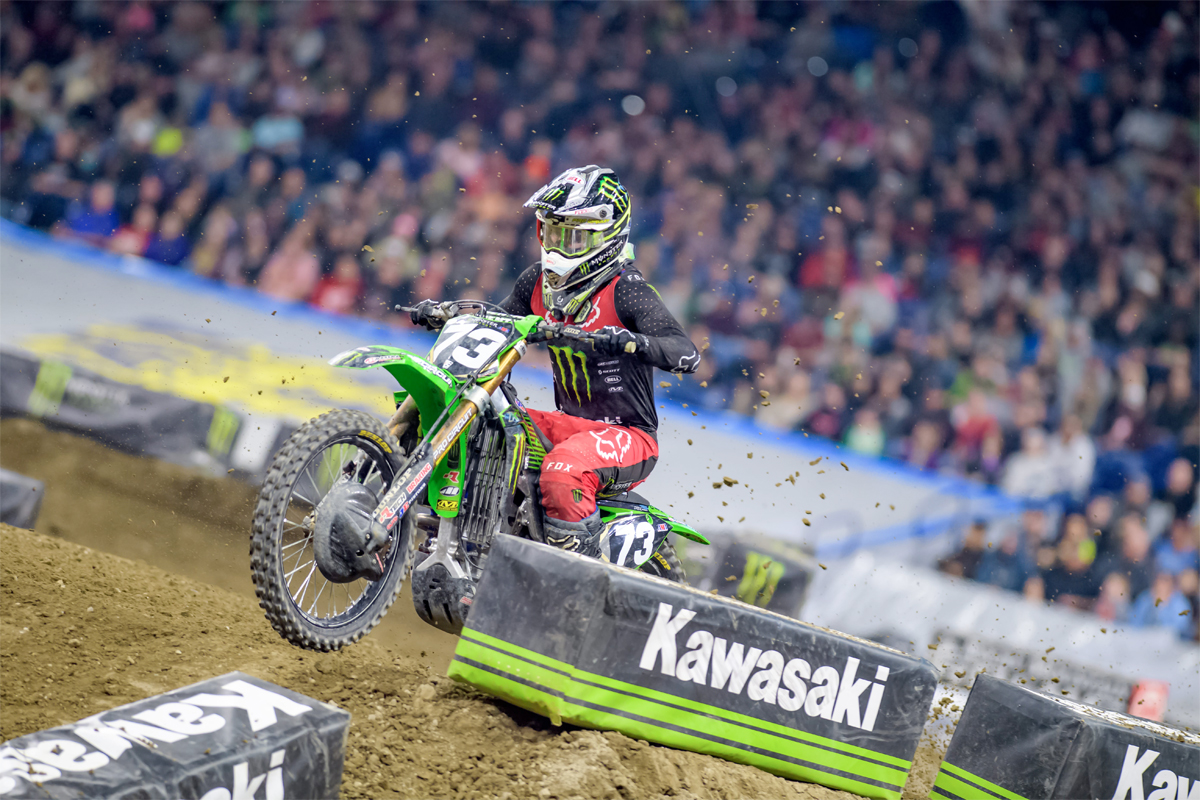 Martin Davalos picked up his fifth career win with Victory today in Nashville
In the 250 West class, the big news of the day revolved around points leader Austin Forkner who was forced out of the night's event after a couple of big crashes during timed qualifying that left the rider who was undefeated in the East Coast 250 championship prior to this weekend with a knee injury.

When the gate dropped on the main event, it looked as though Forkners two closest rivals for the title in Geiko Honda's Chase Sexton and Monster Energy Yamaha's Justin Cooper would take full advantage of their situation with Sexton leading the way closely followed by Cooper.

However, an attempted block pass by Cooper on Sexton left both riders on the ground, allowing Forkner's Pro Circuit Kawasaki team-mate, 32-year-old Martin Davalos to take control of the race and race away to a comfortable race win, and in the process helping to limit the damage to Forkner's championship lead.

Sexton was able to make his way back past Cooper, along with everyone else in the field to finish in second position, with Cooper working his way through to the field to round out the podium.

Despite not lining up for the nights racing, Forker continues to lead the championship standings by a slender three points over Sexton, with Cooper a further four points back in fourth. 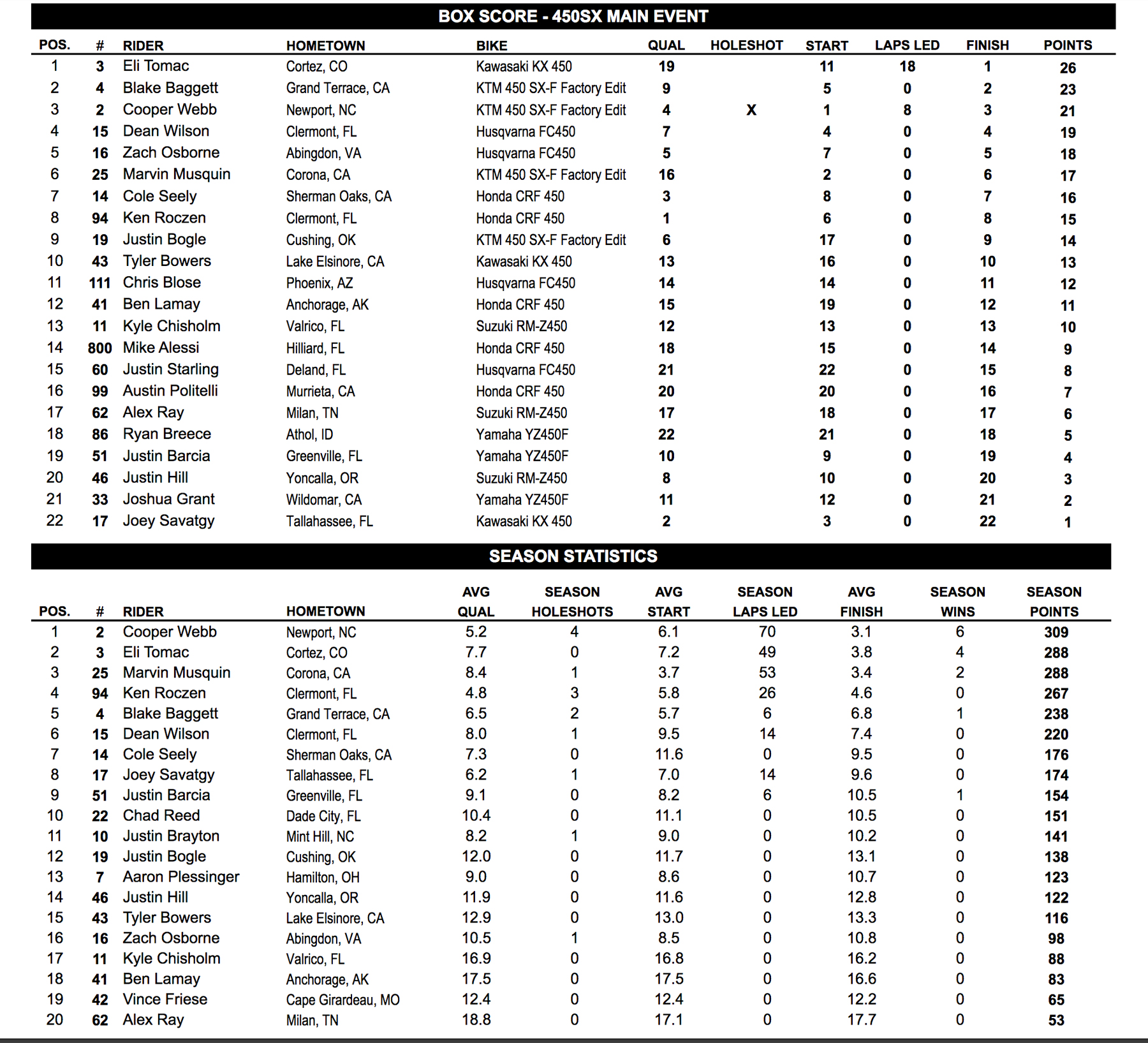 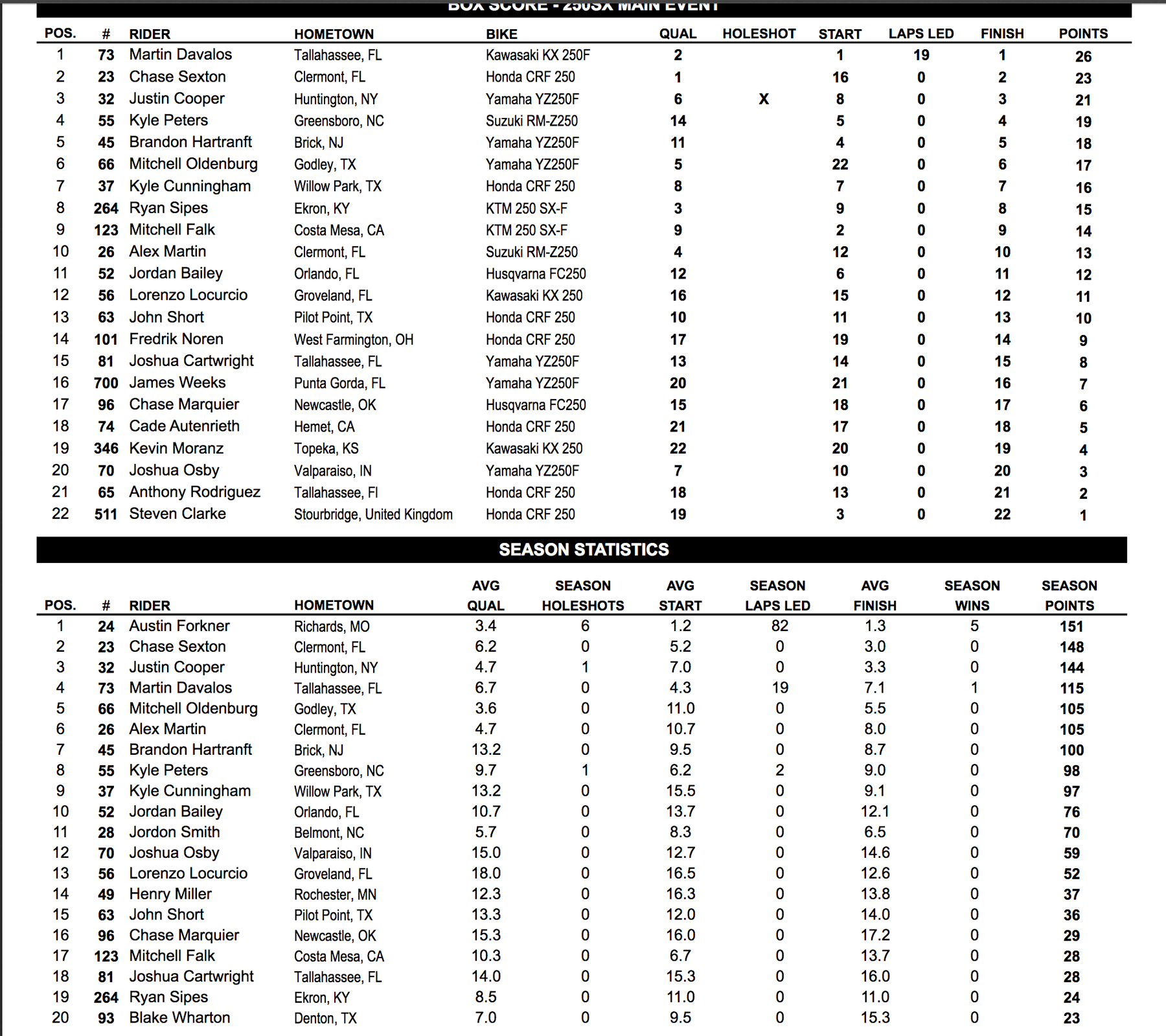