Eli Tomac makes it two in a row with Oakland win


In front of a crowd of 47,061 fans inside Oakland Alameda Coliseum Monster Energy Supercross held its first afternoon race of 2017 on Saturday for the fifth round of the season.

After starting eighth, Monster Energy Kawasaki's Eli Tomac roared through the field in the 450SX Class Main Event to earn his second straight victory in a come-from-behind effort. In the Western Regional 250SX Class, Monster Energy/Pro Circuit/Kawasaki's Justin Hill kept his recent wave of momentum going by capturing his third consecutive win, which allowed him to take control of the championship points lead for the first time this season. 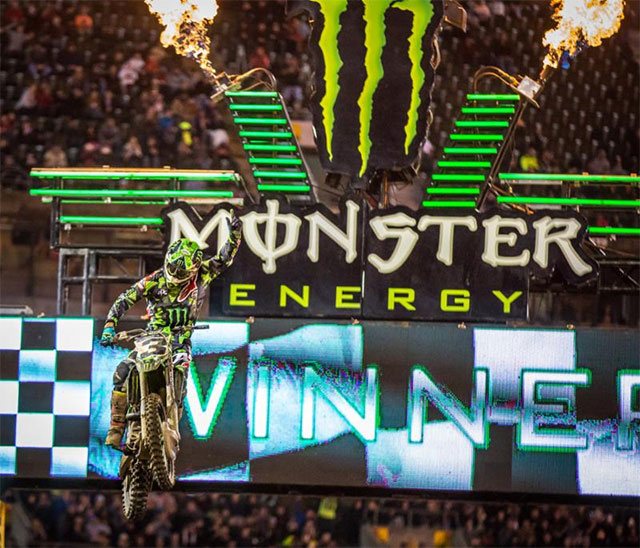 With a clear track ahead, Dungey began navigating the tricky track conditions due to a rain-scattered afternoon and found himself multiple seconds ahead within the first couple of laps. Webb carried the confidence from a strong qualifying performance and the first Heat Race win of his career to make the pass on Anderson for second on Lap 2. After a near mid-pack start, Tomac was able to muscle his way into the top five as well on Lap 2, setting the stage for his march to the front. Team Honda HRC's Cole Seely was on a mission early in the race as well and began inching his way onto the rear wheel of Anderson before eventually making the pass stick for third on Lap 5. 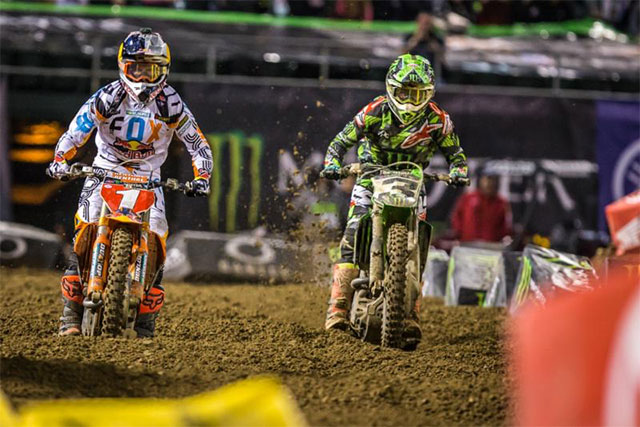 Dungey (1) led most of the Main Event, but lost the lead to Tomac (3) late. Photo: Feld Entertainment, Inc.
On Lap 6, Tomac made an aggressive move to bump his way past Anderson for fourth and continued the charge by reeling in Seely and finding a way past him for third on Lap 7. With Tomac ahead of them, the battle for fourth quickly became the race to watch as Anderson remounted a charge and struck back on Seely to regain control of the position on Lap 10. With his sights set on the leaders, Tomac went on a tear, using every inch of the track as he closed in and battled bar-to-bar with Webb for second. On Lap 12, Tomac found his way by the rookie and quickly started reeling in race leader Dungey, who had gone unchallenged up to that point.

The crowd rose to its feet as Tomac blitzed his way around the rough and rutted circuit. A poised Dungey remained calm, cool, and collected at the front of the 22-rider field while Tomac closed in on his rear fender and began looking for a way around. As the duo distanced themselves from the field Tomac found new race lines and overtook the champ on Lap 16, to the delight of the crowd.

Once out front Tomac quickly stretched out a comfortable margin and took the checkered flag more than 10 seconds ahead of his competition. The win marked his second of the season and sixth of his career. He also became the first rider in history to earn both 450SX Class and 250SX Class win in Oakland. 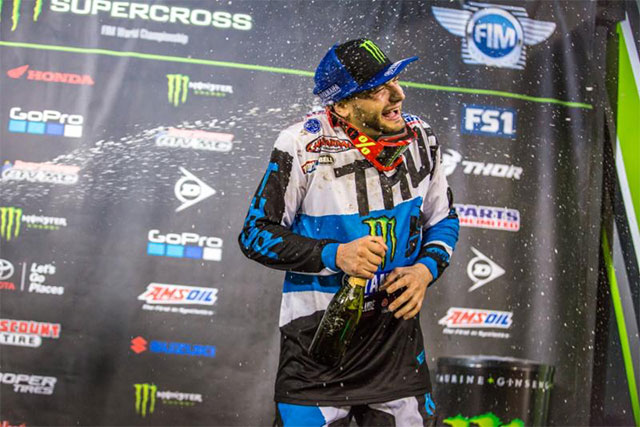 Rookie Cooper Webb enjoyed his first 450SX Class podium. Photo: Feld Entertainment, Inc.
"I had to work for that win tonight and it feels good to grab my second straight win," said Tomac. "The track was real technical and I had a good flow going in the middle of the race. I snuck to the inside of [Dungey] and kept pushing until the checkered flag."

"The track was tricky, it could jump up and bite you at any moment," said Dungey. "I was able to get out front early and open a nice lead, but [Tomac] was riding really good and a little better than me. It's nice to leave the west coast with the points lead and I am looking forward to heading east."

Dungey's runner-up finish was his fifth podium finish of the season, ultimately allowing him to gain valuable points as he maintains a 17-point lead over Tomac, who moved into second. Red Bull KTM's Marvin Musquin fell to third, 25 points out of the lead, following a ninth-place finish. 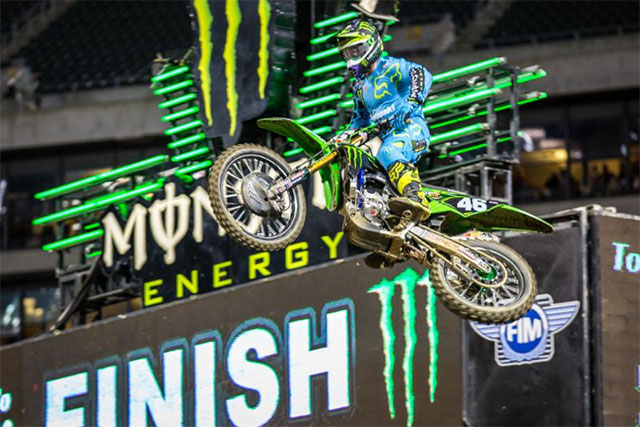 Justin Hill has now won three 250SX Class Main Events in a row. Photo: Feld Entertainment, Inc.
As he attempted to get alongside Davalos and vie for the lead, Forkner suffered a scary crash, which bottlenecked a large portion of the field and forced Forkner to retire from the race early. That opened the door for Hill to move into second and set his sights on Davalos, moving to the front of the field towards the end of the opening lap. McElrath, the championship leader, and GEICO Honda's Jimmy Decotis slotted into third and fourth.

Hill set a blistering pace while out front, quickly stretching out a comfortable gap on his competitors in the early stages of the race. Decotis applied pressure on McElrath for this and soon made the pass on Lap 3. The two riders then engaged in an intense battle for the final podium position, in which McElrath retaliated and reclaimed the position on Lap 7.

With a large lead in hand, Hill made a mistake on Lap 11 and tipped over. He lost valuable ground but was ultimately able to remount ahead of Davalos by a few bike lengths. Davalos attempted to mount a charge, but the Kawasaki rider fended it off. Just behind the leaders McElrath and Decotis were side-by-side several times as they battled for the final podium spot. 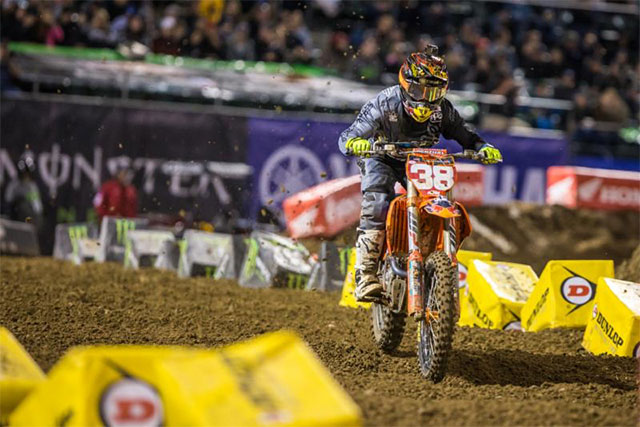 "The track was insane, extremely rough, rutted and technical," said Hill. "I was able to get out front early, but had a little scare halfway through with a small crash. Fortunately, I pulled it together and managed to hold on for the win. I'm stoked to gain control of the points lead and walk away with the red plate."

One week after giving his Pro Circuit team it's 250th racing victory, Hill becomes the first Pro Circuit rider to win three races in a row since Christophe Pourcel and Jake Weimer during the 2010 season.

For the first time this season the 250SX Class has a new points leader as Hill surpassed McElrath to sit atop of the standings with a one-point lead. Yamalube/Star Racing Yamaha rider Aaron Plessinger, who finished sixth, sits third, 16 points out of the lead.

From an Aussie standpoint Daniel Reardon had a great heat where he led the first half and finished second. In the final though luck deserted him and he was caught up in a first turn pile up. He did work through the field from as low as 20th to finish 12th, he is 7th overall in the standings. The 2017 Monster Energy Supercross season continues next Saturday, February 11, with the sixth round from AT&T Stadium in Arlington, Texas. It will mark the second consecutive afternoon race of the championship.