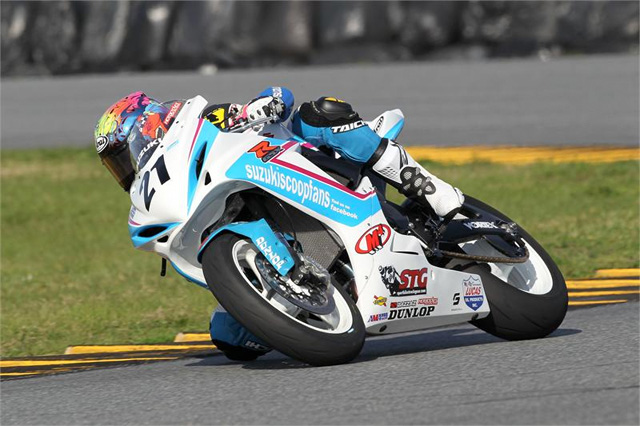 Suzuki's Daytona SuperSport winner Elena Myers has undergone successful surgery to repair a broken scaphoid in her left wrist but is expected to be fully-fit for the next round of the AMA series at Road Atlanta next month.

"The case went great. It couldn't have gone any better," said Dr. Harwood after surgery. "This was probably an old injury she aggravated. We were able to get in and find a sizeable piece of bone. The scaphoid was fixed perfectly with a headless compression screw and we expect it to heal with no complications. Elena should be back on her bike in a couple of weeks."

Said Nguyen: "The surgery went really well. We found the fragment and Dr. Harwood did a fantastic job. He is the best in my opinion and the recovery time is two weeks or less, so we'll work to get her recovered in time for the next race."

"I think how Elena's handled this reflects on her dedication and the way she's persevered to keep improving," said Team Manager Keith Perry. "Racers have to put up with injuries from time to time and she's shown she can do that and still be competitive. Elena's tough. She'd done great and clearly made strides in the off-season. We're anxious to see her back on the bike for these next few races because things are progressing well for her."

Myers broke her wrist nearly a year ago in a Supermoto crash, but the break was only diagnosed a week before Daytona where she raced at the front in both SuperSport races, taking victory in the second event to become the first female to win an AMA Pro sprint road race at Daytona International Speedway.

After testing for two days at the Homestead circuit last week, despite the injury, Myers said: "It bothered me here and there. I thought it was just the aftermath of the Supermoto crash but I never thought anything was seriously wrong. I tested at Jennings GP before Daytona and it bothered me. I had a shocking-type pain; a surge. The next day was totally fine and I played 18 holes of golf. Later it started hurting really bad at home and I got it checked out and they found out what was wrong. I had Cortisone shot before Daytona. This is my first-ever surgery so it is 'kinda weird for me. The recovery time is two weeks or less so I'll be ready for Atlanta and I am really looking forward to going there and racing again."