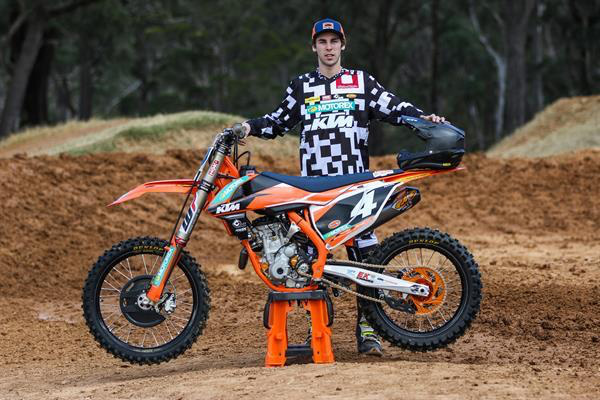 The new deal sees Mastin enter the upcoming supercross championship with an official ride in the SX2 category aboard a KTM 250 SX-F, and become a part of next year‰Ûªs premier class assault on the 2018 MX Nationals.

Famous for its no-stone-unturned approach to racing, the team has proven to be a path to championship success domestically, and career opportunity abroad, and is a dream destination for any rising Australian motocrosser.

The 19-year-old from Vacy, NSW completely dominated the second half of this year‰Ûªs MX2 championship on his Davey Motorsports KTM 250 SX, erasing a 42-point deficit to march to the title off a win streak which encapsulated four of the last five rounds, and eight of the last ten races.

‰ÛÏAs a young kid it‰Ûªs a dream to be on a factory team, especially with KTM." Mastin enthused. "It‰Ûªs awesome to get the opportunity, and I can‰Ûªt wait. This is my first time doing supercross too, so I‰Ûªm getting used to everything.

"It‰Ûªs taken a few days to adapt to the 250F; it‰Ûªs a similar peak power, but they hold a gear longer and you have to get used to the engine braking. Riding MX1 has long been a dream of mine, so I can‰Ûªt wait to get amongst it, but I‰Ûªm not nervous, it‰Ûªs just another form of racing and I‰Ûªll go in confident.

‰ÛÏThe team at KTM is an awesome group of people, well organized and they do everything to a T, so that will be awesome to work alongside and Jay is a good mentor to have with good advice. The whole package is awesome.‰Û