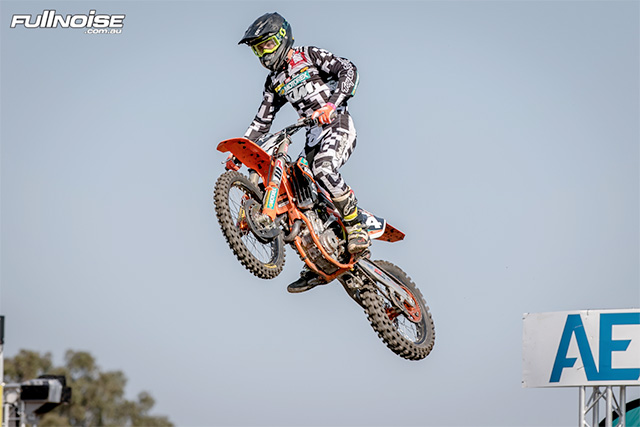 KTM Motocross Racing Team newcomer Egan Mastin made his Australian Supercross Championship debut at Jimboomba‰Ûªs opening round of the 2017 season in Queensland on Saturday night.

Following a successful 2017 MX Nationals season that saw him clinch the MX2 title at Coolum‰Ûªs final round, Newcastle-based Mastin received the call to move beneath the fac-tory KTM awning for his first year contesting the six-round supercross schedule.

Piloting a KTM 250 SX-F in the talent-packed SX2 category, Mastin kicked off the day with a promising showing during practice where he logged multiple fast laps amongst the most experienced riders in class.

Despite crashing heavily in timed qualifying, the gritty 19-year-old still managed to qualify in position nine, however the pain of his mishap ultimately caused for an early end to his evening after circulating to a 12th-place result in SX2 heat two.

Although sore, Mastin escaped the incident without any serious injury and along with the entire KTM Motocross Racing Team has already devised a plan to refine his supercross program before the second round of the series.

"I was excited to get the day started and start with the new team. The start of the day was good and I actually felt comfortable, everything was going well and I was happy with the bike," Mastin said.

"My foot came off in one of the sections during qualifying and I went over the ‰Ûªbars and hit my head pretty hard. It wasn‰Ûªt my night, but I‰Ûªm going to take the positives from the start of the day and focus on what‰Ûªs next from there. I couldn‰Ûªt ask for a better team to be on, they‰Ûªre an awesome group of people and we‰Ûªre already talking about how to make things better, so we‰Ûªll be putting the work in over the next two weeks and I‰Ûªm very excited to keep learning.

Under the guidance team manager Jay Marmont, the supercross rookie will build his experience over the coming weeks ahead of Bacchus Marsh‰Ûªs second round in Victoria on Saturday, 14 October.

"Egan has hurt his sternum and his back, but he‰Ûªs okay," Jay Marmont - KTM Motocross Racing Team manager, said. "Basically he was too sore to ride, so we‰Ûªll just take the weekend off and make sure his injuries are okay before we start do-ing a little bit during the week to prepare him for the next round.

"I can only guide him, so he made the decision himself and we totally support that. We didn‰Ûªt even think that he was going to be able to hop on the bike after that crash, so to see him actually out there riding was good. It means we can go back to the drawing board a little bit and work on what we need to work on.

"I also think it‰Ûªs good for him to actually do his first supercross race to realise where we‰Ûªre at, because we‰Ûªve ticked some boxes there and now we can move forward," Marmont continued, "He‰Ûªs been fast, but coming to a race is different to being at the practice track - he hasn‰Ûªt really been riding with many people - so he‰Ûªs had nothing to really gauge off. Coming to a race and seeing what his competitors are doing, I think being able to do that will help him get that race-craft and we can work on that.

"I know exactly what we need to do, we‰Ûªve got a game plan and he‰Ûªs going to come down and live in Wollongong, so we‰Ûªll be at the track with him every day and hopefully that helps him going into Melbourne," Marmont concluded.