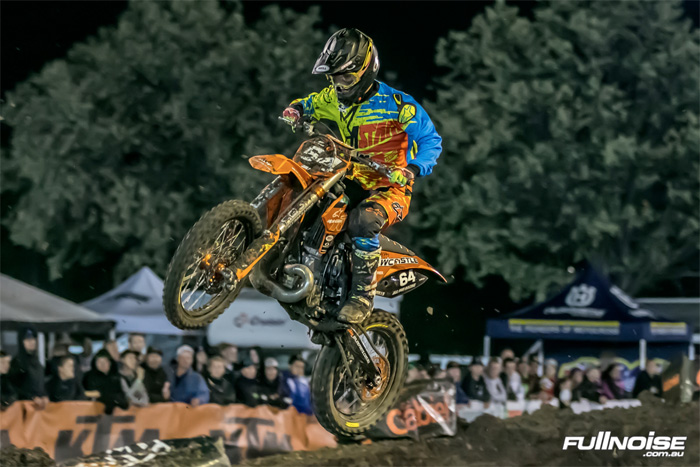 Respected development team Raceline has joined forces with KTM Australia for season 2016 and beyond to provide a critical step in KTM's rider development pathway.

While KTM will continue its factory support backing of MXD and MX2 riders, the new partnership with John Tisdale‰Ûªs Newcastle-based Raceline team will provide a specific developmental pathway for riders to aim for.

"This is the absolute truth, KTM pretty much straight out of the box has been the best racing machine since the beginning." Tisdale commented. "The other brands would probably challenge that, but if you walk around the pits, that is the information you get.

"The new product is a new launch pad and a really exciting thing. We‰Ûªve joined an organisation whose DNA is a really close match with ours, and I don't think, in 18 years we've ever had such a good fit.

"They are committed to pro development, and we have made a reputation of taking really good, talented riders and maturing them for championship performances and our reputation there is second to none. That transition from top junior to competitive senior is what we do best, and it's the role they want for us. I'm really excited abo0ut it.

Managed by respected Team Manager and engine tuner Chris Woods, Raceline will take impressive Sydney based up and comer Dylan Wills into 2016 as its MX2 rider, while Tasmanian KTM junior team graduate Wade Kirkland will represent the team in MXD.

"It‰Ûªs been a bit of a whirlwind, but we are very excited - we‰Ûªve been with the one manufacturer for a long time and KTM is a very good platform to begin with." Woods said. "Dylan has really lifted his game this year, so as long as he can be nice and consistent and keep getting top-six results every time he gets on the bike, at the end of the year he‰Ûªll probably be doing reasonably well in the championship.

"He can do motocross and supercross well and it's hard to find kids who can do both these days because supercross is such a limited resource for them.

"Wade is a big strong kid, and should do quite well in at under 19's class if he knuckles down and works with the team. We‰Ûªll get him up occasionally, maybe for a week and punch out some testing and some riding with Dylan and then put him on a plane back home.

Wills has been particularly impressive in 2015 riding for Newcastle KTM, performing consistently across both championships, with occasional forays into the limelight to upstage the big names.

‰ÛÏI'm really excited." Wills enthused. "Woodsy runs a great program and it's great to see him getting backing from a brand that is already unbelievably good straight out of the box. I can't wait to see what he comes up with.

"It‰Ûªll be a new stepping stone for me in my career, and I just can‰Ûªt wait to start testing and try to get an unbelievable bike underneath me. I'm 100% certain that Woodsy will build me a great bike so I can't wait to go racing.

"My goal now is to win the championship. Now that I'm on a team and I've got a year under my belt, I think that if I start somewhere near the front I‰Ûªll be there at the end of the championship. I know that I can win motos and run with the top guys, so I can't see any reason why I can't win a championship.‰Û