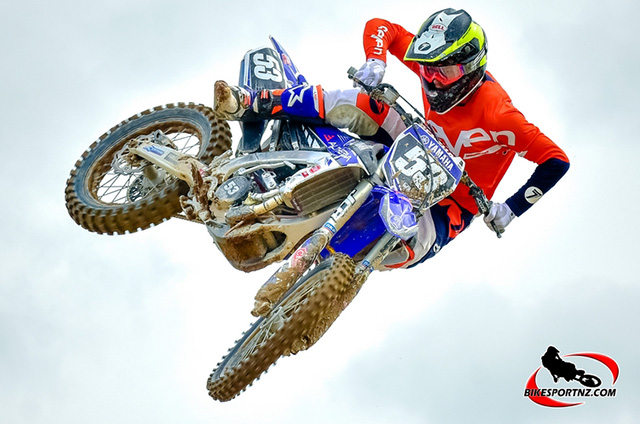 While New Zealender Dylan Walsh is making waves in Europe this season, he's also fiercely keen to return to New Zealand at the end of the year and "settle some unfinished business".

"I will be coming home to race for the Altherm JCR Yamaha Racing Team again this summer, at the annual Whakatane Summercross (just after Christmas), at the New Zealand Motocross Grand Prix at Woodville (in late January) and then at the nationals (starting in February)."

"I am really excited for the new season," said Walsh, who is currently based in England and racing the European 250cc (EMX250) Championships.

"My results (in Europe) this year have been way off. It's been really hard changing bikes, team, country and then there's the language barrier. We're coming to the end of the season here and I'm finally starting to move in the right direction.

"I think I have gotten faster this year in the rough and tough conditions (against the international stars in Europe) and I'm a lot fitter now too."

Walsh is currently ranked 22nd out of 65 riders who have contested the series thus far, his best results coming at the Russian GP at Orlyonok in June, where he finished seventh and fifth in his two races that weekend, good enough for third overall for the GP.

Walsh made himself available to race for Team New Zealand at the annual Motocross of Nations in the United Kingdom on October 1, but missed selection for the three-rider squad as Motorcycling New Zealand opted for a trio of riders with previous experience at this "Olympic Games of motocross" ‰ÛÒ Bay of Plenty riders Cody Cooper and Rhys Carter and Josiah Natzke were chosen to go.

"I didn't get chosen this time, but I'm not too worried about it because it was kind of bad timing for me anyway. I do wish the team all the best," Walsh said.