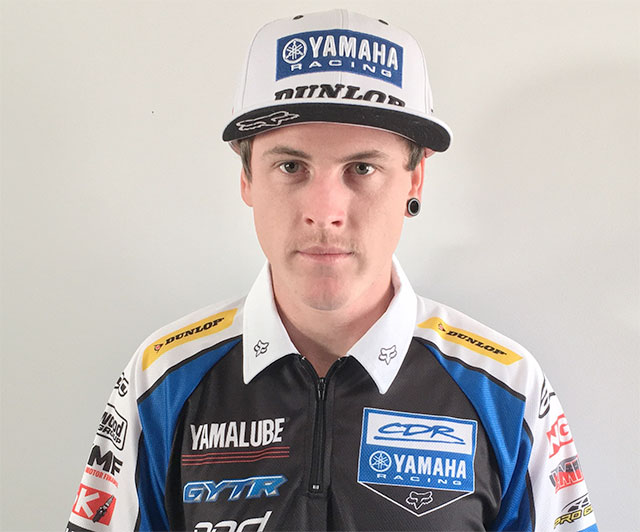 The talented and free-spirited, Dylan Long, will join forces with CDR Yamaha for the 2017 Australian motocross and supercross season.

The 22year old Victorian recently signed off on the deal that will see him compete on a Yamaha YZ450F alongside Dean Ferris in the MX Nationals and then continue to fly the CDR Yamaha flag into the supercross series in the latter stages of 2017.

Dylan has long been regarded as one of the most talented riders in Australia with the skills to ride fast but now with the backing of the most professional team in the pits, Long and CDR Yamaha will make a formidable combination.

"When I went in search of a rider for the 2017, my criteria was for the rider to be talented, self-motivated and energetic that will bring that youthful enthusiasm to the team. But most of all, someone who we think we can help mold into a successful racer and Dylan Long fits that list perfectly," stated team manager, Craig Dack.

"I have watched him ride for a few years now and during that time there has been fastest laps, races won and round podiums so we know he has the skills. For us it's a matter of providing him with the right equipment, channeling his energy in the right direction and turning a talented, free spirited rider into a focused and professional athlete that can be a champion of the future.

"We didn't want to go down the path of recycling older riders as we felt an injection of youth and someone who just loves riding and racing a dirt bike would rub off on the team and Dylan was the obvious choice. He has raced Yamaha's before, knows the YZ450F well and we welcome him back to the brand.

"It will be challenge but it's one that CDR Yamaha and Dylan are both excited to take on and we look forward to working with a young, talented rider that wants to claw his way to the top," Dack ends.

For Long, the phone call from Dack was a dream come true and the goal of every rider who lines up behind a start gate.

"To be asked by Craig to join the CDR Yamaha team and represent them in racing is a huge honour and something every Australia racer aspires to," Long said.

"I have watched how professional the team is and how good the people are in it and I can't wait to get started with them. I love the YZ450F and think it's an awesome bike and I know that it will only get better as the team develops it to suit me.

"The first race seems so far away but I'm motivated and ready to go and proud to wear the CDR Yamaha colours in 2017," Long said.

Long and the CDR Yamaha crew will underago an extensive testing program in the early part of 2017 and be ready to race by round one of the MX Nationals in March at the Wonthaggi circuit in Victoria.