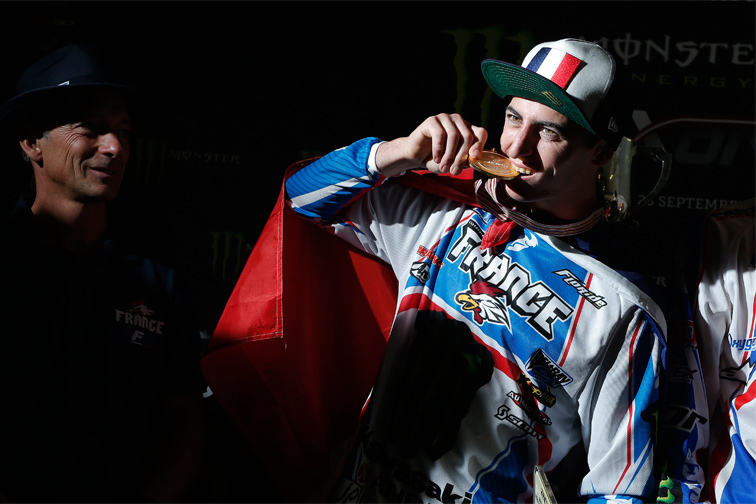 Dylan Ferrandis, a member of the French team that won the Motocross of Nations, has signed a long-term agreement with Kawasaki to continue in the FIM MX2 World Championship before moving to the USA.

A member of the Kawasaki family for several years, Dylan Ferrandis was already one of the main protagonists of the FIM MX2 Motocross World Championship this season. The winner of the opening race in Qatar and with four Grand Prix podiums, Dylan ended the season with a prestigious win at the Motocross of Nations with Team France.

The young Frenchman has always dreamed to continue his career in the USA, and Kawasaki offers him this opportunity through a long-term agreement; the 20 year old from Southern France will race for the Monster Energy Kawasaki MX2 Racing Team in next year's GPs before moving to the Kawasaki‰Ûªs 250cc Team in the USA.

Following in the footsteps of Christophe Pourcel (2006 MX2 World Champion ‰ÛÒ 2009/2010 US 250SX champion) and Arnaud Tonus (moving next season from the MX2 series to the US 250cc series), Dylan will be the third rider to move from Europe to USA with the full support of Kawasaki, thanks to the strong partnership between KME, KMC and KHI.

‰ÛÏI‰Ûªm very happy to sign this long-term deal with Kawasaki." Ferrandis commented. "I‰Ûªve been riding for them for several years now, and I feel so comfortable on these bikes.

"We‰Ûªve got a great relationship and our common goal is to win in Europe but also in the USA; that‰Ûªs been a dream of mine for many years. I hope to get great results in the MX2 Grand Prix series with the MX2 team, and then move with the same goal in the USA.

"I‰Ûªd like to thanks all the people who trust in me and made this deal possible.‰Û