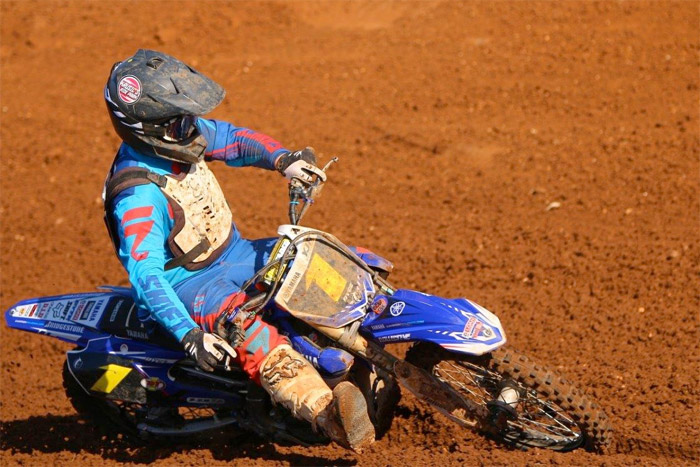 The fourth and final round of the 2016 Victorian junior MX championships have been run and won this last weekend at Mildura and YJR Victoria was right in the thick of the action.

The North West Victorian club had groomed the track to perfection and both Liam Andrews and Cody Dyce were primed to put their YZ's up the front.

Saturday action was for the 125 riders and Cody was still trying to claw back points from a mishap at round one. An overall series podium was the goal and that's what Cody was able to do. Race one was a tough one after a mid-pack start clawing his way back to fifth.

Race two and Cody got away to a far better start and bought his 125 home in second. Race three was another tough race with an average start making it difficult for himself on a track which proved tricky to pass on. His results of 5-2-4 was enough for second for the day and third in 2016 A grade 125 championship.

Sunday's action was for the 250's and 85BW classes. The track was groomed to perfection once again overnight for day two.

Liam was coming into the final round 4th in points but full of confidence of improving on that after some recent results at Gippsland series had Liam win all before him. Race one saw a number of riders hit the deck in turn one and Liam managed to miss the carnage. After lap one and in 5th position Liam charged up to 2nd even making a move for the lead on the last lap but a small fall cost him the chance at the win. Liam quickly remounted crossing the line in 2nd.

Races two and three Liam had some great battles and he finished with two thirds, even setting the fastest lap of race two, to show the huge gains in his riding lately. Liam took third for the day and third in the series which was a fantastic result in such a stacked field.

"I'm so pumped with today's riding,‰Û