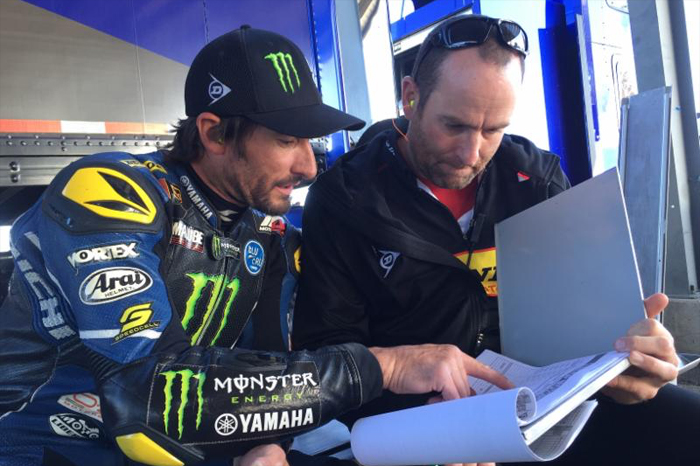 Dunlop held what turned into an abbreviated yet productive tire test at Thunderhill Raceway Park, December 9-10, with 11 MotoAmerica racers turning laps on the three-mile road course in Northern California.

Originally scheduled for two days, the test was shortened by heavy rain on Wednesday but went forward in cold but dry conditions on Thursday.

The test was hosted by Dunlop with the tire company bringing over 400 tires to the test for both the Superbike/Superstock 1000 and Supersport racers taking part, with 12 different spec fronts and 14 different spec rears.

"Overall we didn't get everything we wanted done," Dunlop's Tony Romo said. "But we found a better direction on the front (tire) and some rear compounds. We didn't get to the Qs (qualifying tires), but we will do that the next time here in January."

MotoAmerica Superbike Champion Cameron Beaubier was on one of four MotoAmerica-spec Superbikes at the test and said all things considered the day was a success.

"It was a bummer that we missed the first day just because we had a lot of stuff to go through on our side and on Dunlop's side," Beaubier said. "But we got through quite a bit today.

"We just went out for a lot of short stints and we didn't really do any more than string five or six laps together. We were trying new tires, a few things on our side. It's pretty cool that Dunlop is making a big push to elevate their tire game.

"I'm looking forward to what's to come. We didn't get to try some of the softer tires that they brought, which is kind of a bummer, but we got to try a couple of updated versions of the tire we've been racing on and so far it's going pretty good."

Cold temperatures and the necessity to get through as many tires as possible meant that lap times weren't the number-one concern, though that will undoubtedly change when the teams return to Thunderhill in January.

"We weren't really going for great times and we didn't really put up any great ones," Beaubier said. "We're still probably a second and a half off what I did here last year even with how much better the bike has gotten now.

"We weren't' really going for lap time. With the rain and the cold track tempers it really wasn't a great day to go wring your neck out for a great time. But we got some good track time in and it was good. We knocked off some of the dust since I hadn't ridden since New Jersey. I'm looking forward to getting out here next month."

Garrett Gerloff, who won two races en route to finishing third in the 2015 MotoAmerica Supersport Championship, was hard at work on a chilly Thursday going through Supersport-spec slicks for Dunlop, but by mid-afternoon he'd made his way through the majority of the stack and had found an all-important front tire that he liked. He was one of four Supersport riders on the track.

"Originally, the plan was to test all the tires yesterday and work on bike setup today, but since yesterday was all rained out we've really had to cram all the tires in at once," Gerloff said. "I don't think we're going to be able to get too far into bike setup before it gets dark.

"Dunlop's been working really hard since the last race in New Jersey to make some new tires and right now I really like one of the front tires. I'm not sure of the code, but it's working pretty good. I'm still trying to find a rear tire that I enjoy and that works well for me, but we're making progress and it feels good to be back on a bike again. I haven't ridden in awhile."

The 2016 MotoAmerica AMA/FIM North American Road Racing Series gets started at Circuit of The Americas in Austin, Texas, April 8-10.