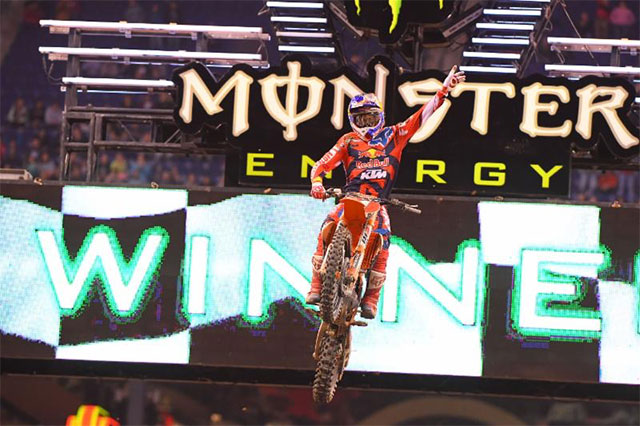 Monster Energy AMA Supercross, an FIM World Championship, made its annual visit to the motorsports mecca of Indianapolis on Saturday, as 60,085 fans filled Lucas Oil Stadium.

In what was arguably the most exciting battle for victory of the 2016 season, Red Bull KTM's Ryan Dungey outlasted RCH Soaring Eagle/Jimmy Johns/Suzuki Factory Racing's Ken Roczen to capture his seventh win and extend his points lead. In the fifth race of the Eastern Regional 250SX Class Championship, Yamalube/Star Racing Yamaha's Aaron Plessinger became the fifth different winner in as many races, dominating en route to his first career Main Event victory at his home race.

Smartop/MotoConcepts Racing's Mike Alessi earned his first SupercrossLive.com Holeshot Award to start the 450SX Class Main Event ahead of Dungey and Rockstar Energy Husqvarna Factory Racing's Christophe Pourcel. Dungey moved into the lead by the end of the first rhythm section, while Alessi was then forced to deal with pressure from Monster Energy Kawasaki's Eli Tomac.

Tomac moved past Alessi into second, while Roczen followed into third. Shortly thereafter Roczen made the pass on Tomac for second and set his sights on Dungey out front. Deteriorating track conditions made it difficult for Dungey to open a lead, allowing Roczen to close in. On Lap 3 the first of several battles for the lead occurred as Roczen moved alongside Dungey in the whoops, only to have the KTM rider fend him off. The two rivals found themselves side-by-side again to close out Lap 5, with Roczen attempting to make a pass on the inside of one of the track's most difficult turns. The attempt slowed Roczen's momentum and allowed Dungey to then open his largest lead of the race to that point.

The battle for the lead stabilized for the next handful of laps as Dungey and Roczen navigated through lapped riders. On Lap 11 Tomac crashed while comfortably running third, losing several positions as he attempted to restart his bike. That allowed Rockstar Energy Husqvarna Factory Racing's Jason Anderson to move into third, after starting ninth. 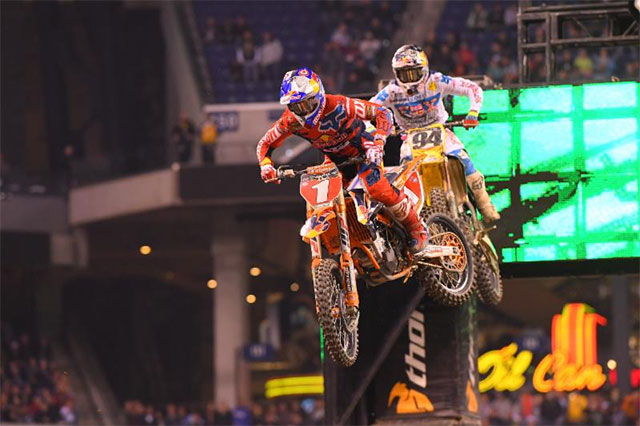 Dungey (1) and Roczen (94) provided one of the most thrilling battles for the win all season. Photo Credit: Simon Cudby
On Lap 15 the gap between Dungey and Roczen had shrunk to mere bike lengths once more, and the two riders were side-by-side yet again. Dungey briefly held off Roczen for a third time, but a mistake on Lap 16 allowed Roczen to move out front, bringing the crowd to its feet. The German rider quickly established a lead, but as he came to complete the lap a mistake forced him to roll the finish line, allowing Dungey to jump back out front. Roczen made a push in the final laps to try and create another passing opportunity, but another small mistake on the final lap allowed Dungey to take the win by 1.7 seconds. The duo finished more than 27 seconds ahead of third place.

It was Dungey's 29th career 450SX Class victory, giving him sole possession of sixth on the all-time wins list. It was also his 29th consecutive podium finish, extending his record streak.

"That's what it's all about right there. That's why we work hard [during the week], to put on a good show," said Dungey, who won for the third-straight season in Indianapolis. "It's not going to be easy all the time, but we fought to the end. I was riding on the ragged edge there to keep it [the bike] in line. I was able to get a good start and that's what put me in position to run up front and take the win."

It was Roczen's eighth podium of the season and his second straight runner-up result.

"Ultimately I wish the race kept going for another five laps. The track was really rough out there, but we kept fighting the whole way," said Roczen. "I was able to make a pass for the lead but I made a mistake right before the finish and couldn't make the jump, so that gave [Dungey] back the lead. I made another mistake later and that pretty much ended it."

Anderson finished third for the second week in a row and is now in the midst of a three-race podium streak.

Dungey extended his points lead to 45 over Roczen with four races remaining. Anderson solidified his hold on third, 63 points back. 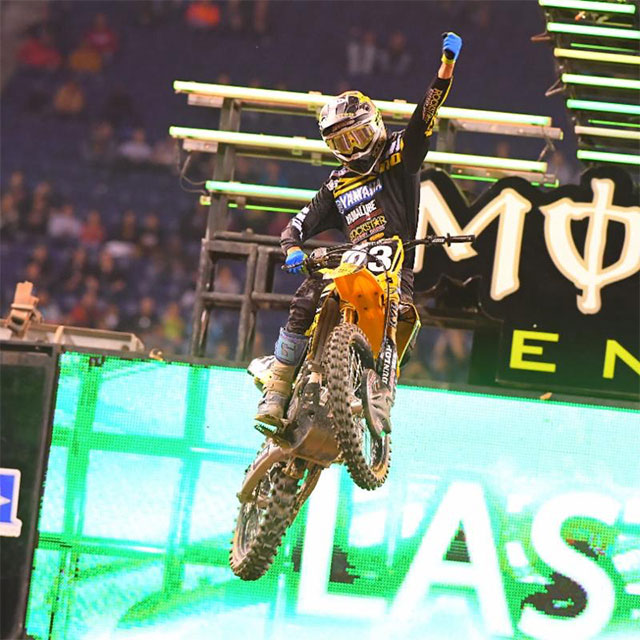 Plessinger captured the first Main Event win of his career. Photo Credit: Simon Cudby
In his first race with Monster Energy/Pro Circuit/Kawasaki, Gannon Audette claimed his first SupercrossLive.com Holeshot award to start the Eastern Regional 250SX Class Main Event, with Plessinger and GEICO Honda's Malcolm Stewart in tow. Plessinger wasted little time in moving into the lead and seized control of the race on the first lap, bringing Stewart along with him into second. Audette settled into third, but would soon come under fire from Yamalube/Star Racing Yamaha's Jeremy Martin and Rockstar Energy Husqvarna Factory Racing's Martin Davalos.

As Plessinger and Stewart pulled away out front, Audette lost two more positions to both Martin and Davalos. The top four riders settled into position until just past the halfway point when a big crash from Martin not only took him out of third, but also out of the race. That allowed Davalos to move into third for four laps until a crash while attempting to get around lappers caused him to lose two positions. As a result, Audette found himself back in a podium spot. 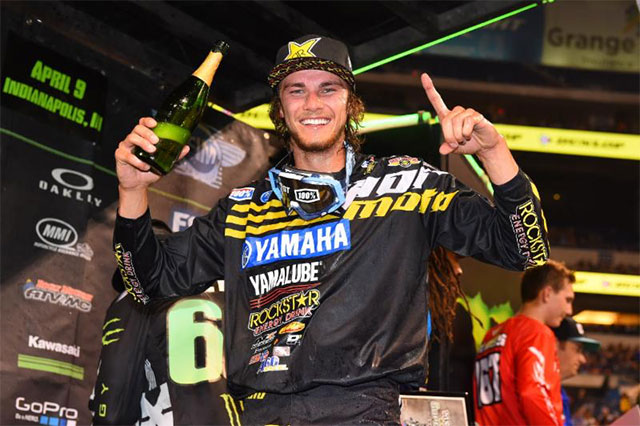 Plessinger is the third 250SX Class rider to break through for a first career win in 2016. Photo Credit: Simon Cudby
Plessinger widened his lead considerably in the closing laps and took the checkered flag more than 10 seconds ahead of Stewart. The Ohio native is the third first-time winner in the 250SX Class this season and the 102nd Main Event winner in the history of the division. It's also the first time in the history of the Eastern Regional Championship that there have been five different riders in five races.

"I can't even tell you how amazing this feels. I'm speechless," said Plessinger, whose hometown is just a short drive in Hamilton, Ohio. "These fans are crazy. I heard them every lap. I was so determined today, especially in front of my hometown crowd. I just put my head down and got the start. It wasn't easy, but it was easier than my last races for sure."

Stewart entered the night as the points leader and his runner-up finish allowed him to maintain control of his lead in the championship standings.

"Hats off to Aaron. Now he knows what it feels like to win," said Stewart. "I'm happy with second. I can't take anything negative from this. I'm going to keep doing what I'm doing and hopefully I keep the red plate [as the points leader] and win this championship. We only have four races left, so we'll keep trying to get those points."

Stewart's lead in the Eastern Regional standings now sits at 10 points over Plessinger, who moved into second with the win. Davalos, who finished fifth, is third, 25 points out of the lead.

Monster Energy Supercross continues next weekend with the 14th race of the season from St. Louis' Edward Jones Dome.

Main Photo: Dungey withstood a tough test from Roczen to earn his seventh win of the season.
Credit: Simon Cudby