Dungey looking to turn it up with five rounds to go 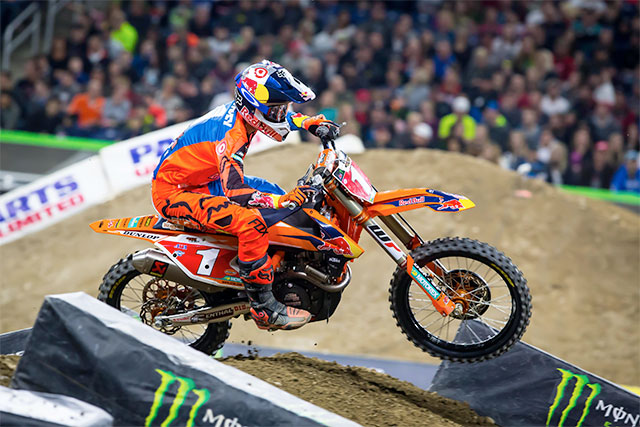 With only two Main Event wins behind him this season, Ryan Dungey came into Round 12 of the Monster Energy Supercross Championship looking for a big victory in the Motor City.

The three-time AMA Supercross Champion began the day well as he qualified 3rd overall just ahead of his teammate Marvin Musquin in the morning‰Ûªs timed qualifying sessions.

Dungey took the 450SX Heat 2 victory to qualify stright through to the main event.

When the gate dropped on the main it was Musquin who shot off the line leading the first three laps of the race until Dungey's closest championship rival Eli Tomac made his way into the lead on lap four. Dungey began the race just inside the top ten, where he was forced to work his way through the pack early on.

Dungey was able to make his way up to 4th by the halfway point and from there he set his sights on a podium position. Musquin held tough to ultimately capture 2nd overall for the night to earn his seventh podium finish of the season.

"I think the hardest thing is where we were at in the first lap of the race in the last few races," Dungey reflected, "Eli gets out front and takes off and I have nothing for him but I put in a hard charge for 3rd and that was good. We just have to put ourselves in a better position and work through it together. We have five races left, but we need to turn it up.‰Û