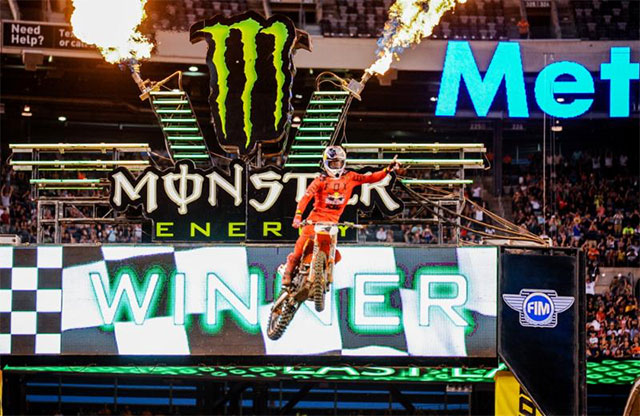 The drama surrounding the 2017 title fight in Monster Energy AMA Supercross, an FIM World Championship, took another twist on Saturday in front of 59,583 fans inside MetLife Stadium during the penultimate round of the season.

In the return of the Eastern Regional 250SX Class, Rockstar Energy Husqvarna Factory Racing's Zach Osborne came from behind to grab his fourth win of the season and tighten the battle for the championship.

The 450SX Class Main Event kicked off with Rockstar Energy Husqvarna Factory Racing's Jason Anderson securing the SupercrossLive.com Holeshot over RMATV/MC-WPS-KTM's Davi Millsaps, while both Dungey and Tomac settled in behind them.

Early aggression by Tomac allowed him to get by Dungey on an extremely technical layout in challenging conditions, where track position proved to be crucial. Soon after that Tomac worked his way past Millsaps, leaving Dungey to chase his rival's progression to the front. 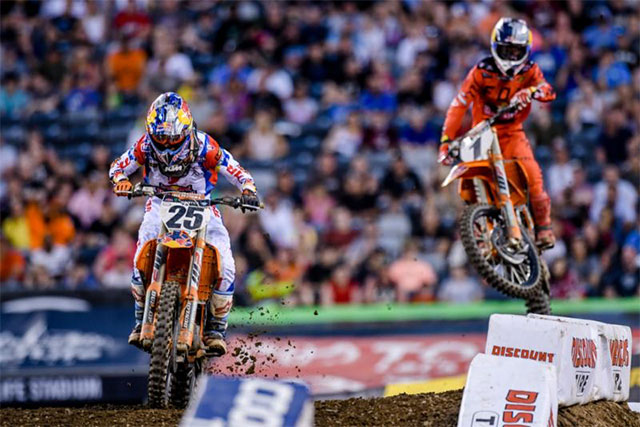 A bobble, that fans will debate for years to come, on the last lap cost Musquin his third win. Photo: Feld Entertainment, Inc.
On Lap 1 Tomac was gifted the lead when Anderson slid out in a turn and went to the ground, ultimately remounting in eighth. Dungey was able to move up into second after a successful pass on Millsaps prior to the incident. With a clear track ahead of him Tomac was poised to build a gap on Dungey, but he paced the field for just a single lap before losing traction in a corner and falling over. Dungey slipped past to seize control of the Main Event, bringing Millsaps into second and Team Red Bull KTM Factory Racing's Marvin Musquin in third. After spending a lengthy time getting his Kawasaki restarted, Tomac resumed in 15th.

Dungey maintained a comfortable advantage throughout the heart of the 20-minute-plus-two-lap race, but Musquin slowly started to track down his teammate and training partner after surpassing Millsaps for second on Lap 3. The KTM duo paced one another for several laps, carefully navigating the treacherous layout in addition to lapped riders, but Musquin soon got the upper hand and made the pass for the lead on Lap 10. From there the Frenchman put a little distance between he and Dungey, but the champ kept his teammate within reach.

Behind them Tomac was slowly working his way back up through the field, patiently making passes to get on the verge of the top 10 behind his Monster Energy Kawasaki teammate Josh Grant. However, Tomac endured another instance of misfortune on Lap 16 when he lost traction off a triple jump and came up short, veering off the side of the track and stalling his Kawasaki. He got back onto the track quickly and lost just one spot to fall to 12th. 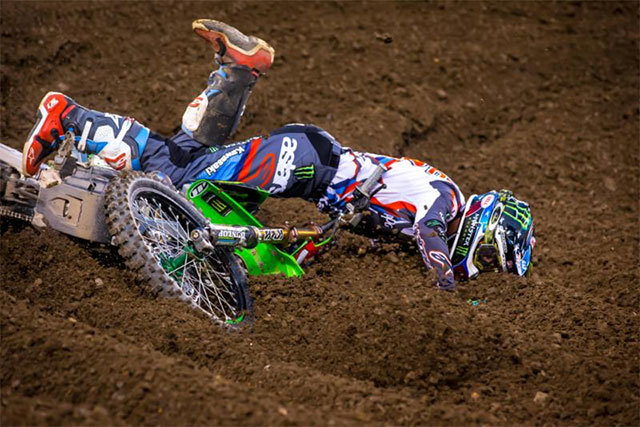 After crashing out of the lead, Tomac fought back to finish eighth. Photo: Feld Entertainment, Inc.
Out front, Dungey took advantage of alternative lines to close back in on Musquin. While he wasn't able to mount a serious challenge or attempt a pass, he stayed within a bike length of his teammate for several laps. As they approached the final lap Dungey picked up the pace and started looking for a way around. When the lead pair took the white flag Dungey applied pressure, ultimately forcing a small bobble out of Musquin, who popped out of a rut entering a corner and veered off line. The champ slipped by and carried on to take the win by 1.6 seconds, ending a seven-race winless streak with the 34th victory of his career.

"That's' what we needed. Eli [Tomac] was riding well early, but he made a mistake and went down. Marvin [Musquin] was riding well too and got by us, but I stuck behind him," said Dungey. "The track was really falling apart as the race went on and got difficult, but I was able to follow Marvin, watch his lines, and take advantage late. We got some valuable points [in the championship] but it's not over yet. There's still one more race."

Musquin narrowly missed out on his third victory of the season in second, while Anderson made an impressive rebound from his early misfortune to finish third. Tomac continued to fight and soldiered home to finish eighth, ending a dominant nine-race stretch in which he earned seven victories and finished no worse than second.

Dungey entered the night facing a three-point deficit to Tomac, after previously giving up a 29-point advantage over his Kawasaki rival over the course of a 32-point swing in the standings. He left MetLife Stadium with a nine-point lead.

"That was a bummer. The only thing to look forward to is there's one race left," said Tomac. "The scenarios can flip and the same thing could happen to Ryan [Dungey]. That's all I can hope for. Nine points will be hard to cover and catch up on, but I'll give it my all and look to win. That's all I can do."

It marked the first time this season that Tomac failed to win the Main Event after leading a lap. 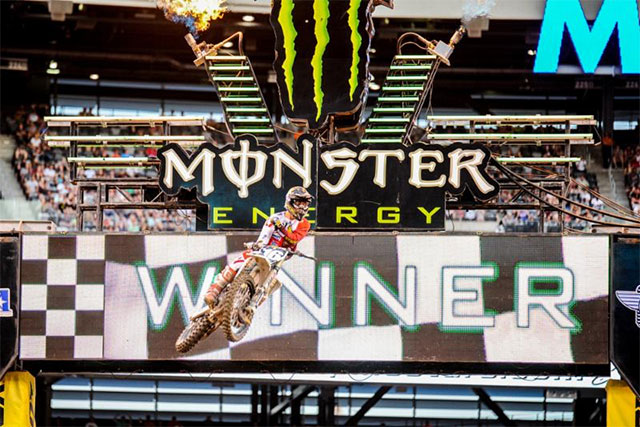 Zach Osborne came from behind for his fourth win. Photo: Feld Entertainment, Inc.
In the penultimate Eastern Regional 250SX Class Main Event it was Monster Energy/Pro Circuit/Kawasaki's Adam Cianciarulo who claimed the SupercrossLive.com Holeshot, but he quickly gave up the lead to his teammate, and championship leader Joey Savatgy. Behind them, GEICO Honda's Cameron McAdoo slotted into third, but quickly engaged in battle with Yamalube/Star Racing Yamaha's Dylan Ferrandis and GEICO Honda's Christian Craig, with Ferrandis settling into third.

Savatgy was able to open up a gap over Cianciarulo and the rest of the field, but Osborne was storming to the front after starting seventh. The Husqvarna rider moved into fifth on Lap 1, took over fourth on Lap 2, and broke into podium position on Lap 3 after passing Ferrandis. From there he set his sights on the Kawasaki teammates, gradually closing in on Cianciarulo before taking over second on Lap 6.

Osborne continued to push and was soon all over Savatgy for the lead, successfully taking over control of the Main Event on Lap 8. Once out front Osborne never looked back, while Savatgy would be forced to deal with adversity. After getting off line on Lap 13 the points leader landed on a tuff blox and fell over, giving up the spot to Ferrandis before remounting. 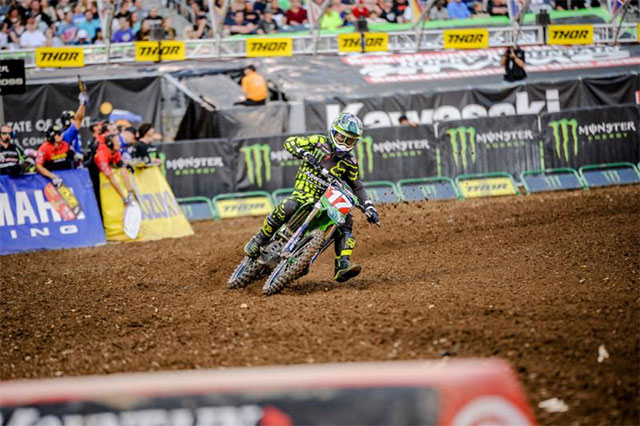 Joey Savatgy holds just a seven-point lead heading into the final round. Photo: Feld Entertainment, Inc.
Osborne continued to extend his lead and took the checkered flag 4.5 seconds over Ferrandis, who recorded a career-best result. In each of his four wins this season Osborne has come-from-behind to do so, passing his way to the front.

"It was a tight track tonight. You had to be aggressive," said Osborne. "I got a terrible start, like mid pack, and barely made it through first turn. It was a struggle. The first couple laps there I was really nervous, but I was able to make the pass on Joey [Savatgy] and get into the lead and just ride my own race."

Savatgy came home third, but it marked the third consecutive race that Savatgy gave up the lead, while the late misfortune ended a streak of four straight runner-up finishes.

"I got to keep working. It's not always going to be easy. If it was there'd be more of us up here [on the podium]," said Savatgy. "I've got to keep the ball rolling. I'm not a quitter. We've been knocked down a few times and I came up short last year [for the championship], but I'm not about to let that happen again. We'll come into Las Vegas with an open mindset, have some fun, and do our best."

Following the race Savatgy's reentry onto the track following his crash came under inquiry from race officials, who are in the process of reviewing where on the track he returned to competition, and the accuracy of his position in the running order. As of issuing, a final determination had yet to be made.

Currently, based off the provisional results, Savatgy and Osborne are separated by just seven points heading into the final round of the season.

The 2017 Monster Energy Supercross season will come to a dramatic conclusion next Saturday, May 6, for the 17th and final round of the championship from Sam Boyd Stadium in Las Vegas.

Main Photo: Dungey took his third win of the season and moved back into the points lead.
Credit: Feld Entertainment, Inc.