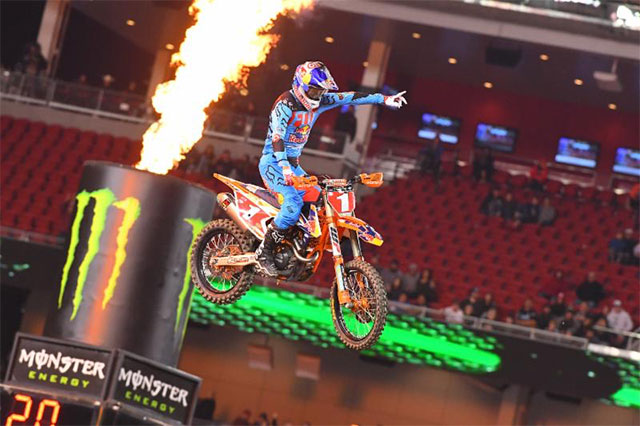 Yamalube/Star Racing Yamaha's Cooper Webb extended his points lead as he rode his way through the field en route to his fifth victory of the season in the Western Regional 250SX Class.

Rockstar Energy Husqvarna Factory Racing's Jason Anderson scored his first SupercrossLive.com Holeshot Award of the season to start the 450SX Class Main Event, just ahead of Dungey and GEICO Honda's Justin Bogle. A small bobble by Anderson coming out of the first turn caused him to lose momentum, which allowed Dungey and Bogle to get by.

On the opening lap Bogle briefly jumped his way past Dungey to take the lead, but Dungey instantly struck back to retake the top spot in the next turn. RCH Soaring Eagle/Jimmy John's/Suzuki Factory Racing's Ken Roczen moved into second by passing Bogle on Lap 1, closely followed by Anderson, who also made the pass on Bogle just a few turns later.

The battle for the lead intensified on Lap 7 as Roczen closed in on the championship leader, but Dungey remained calm under pressure and fended off each move the German rider attempted. The lead duo set a blistering pace out front and pulled away from the pack, pacing each other throughout the entire 20-lap Main Event.

Dungey eventually opened a gap on Roczen and led every lap to claim his sixth victory of the season, extending his points lead and record-setting 450SX Class podium streak to 28 races, dating back to last season.

"Tonight was good. I got off to a strong start, which was key," said Dungey. "Kenny [Roczen] was applying the pressure, but I stayed strong and made sure to make quick work with lapped traffic."

Roczen crossed the line in second, followed by Anderson in third.

"I felt strong tonight and we were close for the win," said Roczen. "We [Dungey and I] were pacing each other the entire race but I came up a little short tonight and had to settle for second."

Dungey increased his championship lead to 42 points over Roczen in second, followed by Anderson, who sits 58 points out of the lead in third. 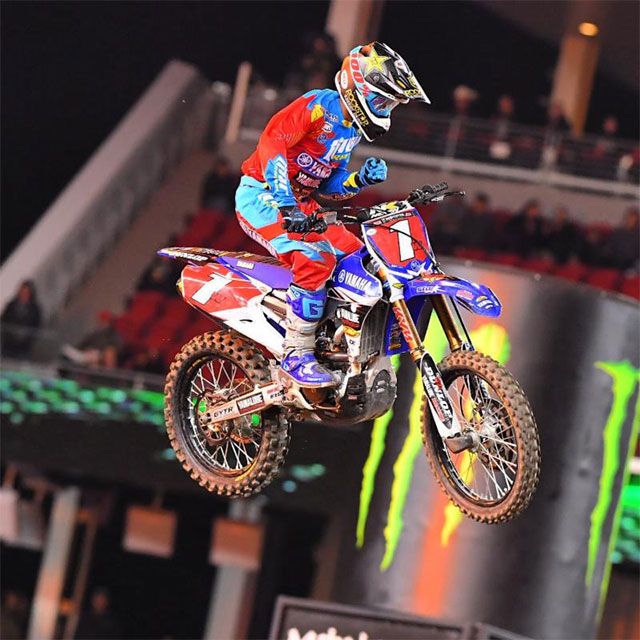 On the opening lap Webb ran in sixth place, just ahead of Monster Energy/Pro Circuit/Kawasaki's Joey Savatgy, who entered the race second place in the championship. The two riders began mounting a charge through the field, mimicking each other's every move as they climbed up the running order.

Martin found a way past his rookie teammate Harrison for second place on Lap 4. Harrison would then surrender third to Webb on the very next lap. Savatgy continued to keep Webb in sight as he moved into fourth place on Lap 6.

Webb, the defending champion, started nipping at the heels of Martin and eventually made the pass to take over second on Lap 7. Savatgy quickly followed by making an aggressive pass on Martin for third place on the eighth lap.

As Webb and Savatgy made their way into podium contention, race leader Osborne rode strong and consistent laps at the front of the field, but his lead began to slowly diminish each lap as Webb continued his march towards the front. On Lap 11, Webb dove to the inside of Osborne, took the lead and never looked back.

Webb went on to claim his fifth 250SX Class victory of the season, and the 11th of his career.

"It wasn't one of my better starts, but I plugged away," said Webb. "Zach [Osborne] was riding good tonight, but fortunately I was able to catch him towards the end to make a pass and grab another win."

Osborne equaled his season-best result in second, while Savatgy rounded out the podium in third.

"I'm pretty happy with the race overall," said Osborne. "The track was tricky, becoming slippery as the race wore on. I gave it my best effort, which was three laps short [of the win] tonight."

Webb strengthened his control of the Western Regional 250SX Class standings, where Savatgy trails by 16 points in second. GEICO Honda's Christian Craig, who finished in fourth place and had his five-race podium streak snapped, sits 23 points behind in third.

Australian Hayde Melross qualfied by winning the LCQ. Things went south in the final though when he was kicked forward going into a corner and with no brakes was sent head first over the berm, landing heavily on his stomoch on a temproary fence. He did walk away holdoing himself but we are not sure of his injuries yet.


The 2016 Monster Energy Supercross season continues next weekend with the championship's annual visit to Lucas Oil Stadium in Indianapolis on Saturday, April 9.