Dungey Claims Third In a Row in St. Louis 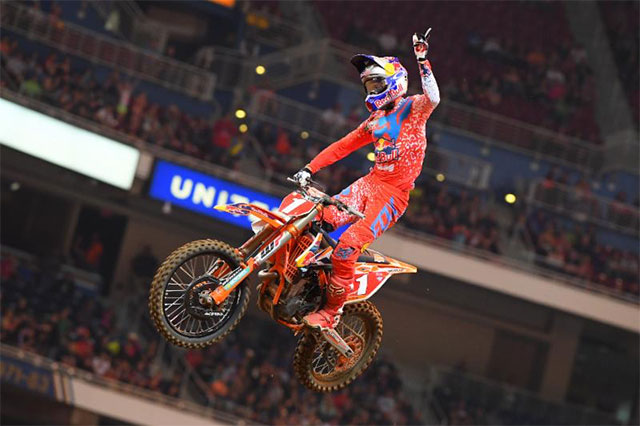 For the third straight race the battle for the Monster Energy AMA Supercross, an FIM World Championship, 450SX Class win came down to Red Bull KTM's Ryan Dungey and Ken Roczen, with Dungey leading every lap of the The Dome at America's Center in St. Louis en route to his third consecutive victory.

In the sixth race of the Eastern Regional 250SX Class Championship, a wild Main Event resulted in a shakeup of the championship standings as Yamalube/Star Racing Yamaha's Jeremy Martin emerged with his second win of the season, becoming the first repeat winner in the Eastern Region this season.

Dungey and RCH Soaring Eagle/Jimmy Johns/Suzuki Factory Racing's Roczen entered the first turn of the 450SX Class Main Event side by side, with Roczen narrowly edging out his rival for the SupercrossLive.com Holeshot Award, but it was Dungey who had the inside position in the next corner to secure the lead. The two riders surged ahead, bringing BTO Sports/WPS/KTM's Justin Brayton with them in third. 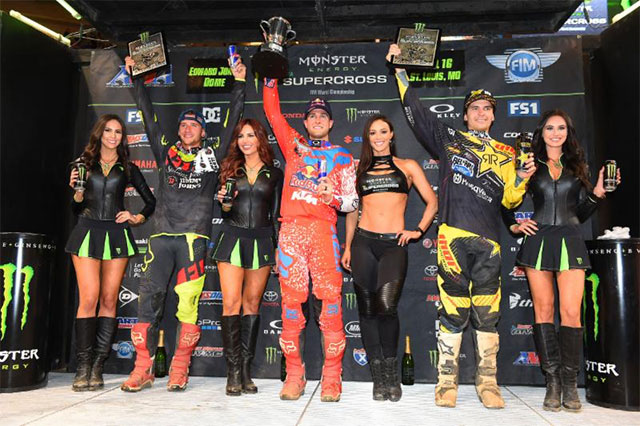 Dungey (center), Roczen (left) and Anderson (right) have finished 1-2-3 for three consecutive races . Photo Credit: Simon Cudby
The recent trend out front continued for the lead duo, with Roczen hounding Dungey during the early laps. A few bike lengths separated the top two for a while until Roczen attempted to mount a challenge on Lap 5. He closed in on Dungey and attempted to put a wheel inside in several corners, but didn't have the momentum to gain ground. As that was taking place, Rockstar Energy Husqvarna Factory Racing's Jason Anderson passed Brayton for third after making contact with the KTM rider, which ultimately caused Brayton to drop to the bottom of the top 10.

As Dungey and Roczen approached lappers on Lap 9 the lead tightened up again, this time allowing Roczen to get alongside Dungey and make a pass for the lead. It didn't last long, however, as Dungey slipped underneath Roczen as he attempted to defend his line in the following corner. Dungey took away the preferred line in the whoops and took control of the race again. Just three laps later Roczen's front tire washed out and sent him to the ground, giving Dungey the breathing room he needed to carry on to victory. Roczen remounted quickly, but not before losing second place to Anderson.

Dungey cruised to his eighth win of the season, tying the career-high mark he set en route to the championship a year ago. It was also his 30th career victory and 30th consecutive podium finish.

"[Roczen and I] were really pushing for the third week in a row. I needed to eliminate the mistakes and put the hammer down," said Dungey. "[Roczen] came up on the inside and got by me, but then made a little mistake in the next corner that allowed me to slip under and get back by. After that I found some new lines and that helped a lot."

Anderson and Roczen stayed close throughout the closing laps in their battle for second, and Roczen was able to reclaim the position with just two turns remaining on the final lap as they encountered lapped riders. It marked the third straight race that Roczen, Dungey and Anderson finished 1-2-3.

"[Dungey and I] are both riding really good. That's the fun part," said Roczen. "I really wanted the win, but I tucked the front end. Hats off to Ryan. He's riding great right now and got the win today."

Dungey added to his points lead over Roczen, which now sits at 48 points, and has put himself in a position to clinch back-to-back 450SX Class titles at the next race. Anderson is third, 68 points behind Dungey. 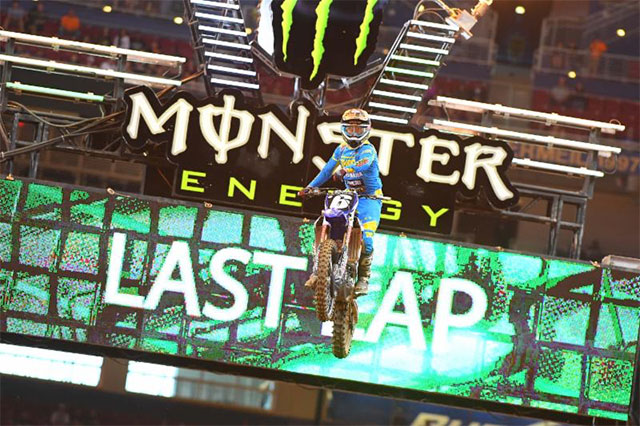 Stewart's opening-lap charge continued as he passed Audette for second and set his sights on Martin out front. However, Stewart went down in the track's sand section before the completion of the lap, collecting Audette and MAD Racing/Dirt Candy Graphics/Suzuki's Matt Bisceglia. It was the start of what would be a frustrating race for the points leader, who remounted in 12th.

The early incident allowed Martin to open a healthy lead almost immediately, while Troy Lee Designs/Red Bull/KTM's Shane McElrath moved into second and Yamalube/Star Racing Yamaha's Aaron Plessinger, last week's winner, slotting into third. After fighting back up to seventh following his crash, Stewart went down again and fell to 13th on Lap 4. The very next lap Plessinger passed McElrath for second.

The top three settled in at the halfway point of the race, but Stewart was mounting yet another charge through the field. He valiantly fought his way up to sixth and had a top five in his sights until a third crash on Lap 14 dropped him to ninth. A crash by Monster Energy/Pro Circuit/Kawasaki's Tyler Bowers on the final lap moved him up one spot to eighth at the finish. 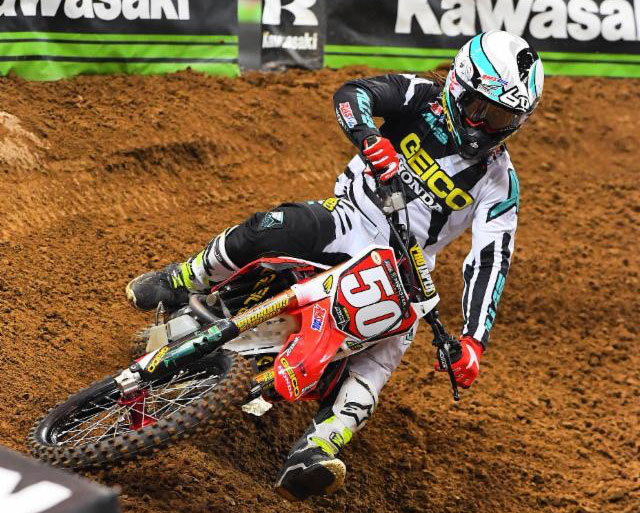 Despite three crashes and an eighth-place finish, Stewart remains the points leader. Photo Credit: Simon Cudby
Martin enjoyed a wire-to-wire effort to secure his fourth career win, just one week after he recorded a DNF at the previous race. It ends a historic stretch in which five different riders won the first five races of the championship.

"It was nice to get the holeshot since I've been on ground two of last three weekends," said Martin. "I was able to get a good start and ride my own race, and not worry about anything but hitting my lines. We've had a lot of different winners [in the Eastern Regional Championship] this season, but it feels good to get that second win first."

Plessinger followed up his first career win last weekend with a runner-up finish, giving Yamalube/Star Racing Yamaha its first ever 1-2 finish. McElrath earned his second podium result of the season in third.

"I got off to an [okay] start. I just put my head down and charged past people. I got by Shane [McElrath] and sat in second. It was all I could do," said Plessinger. "Jeremy [Martin] was just riding really well. I'm just going to take [the championship battle] race by race. Obviously it's close, but I can't think about it too much otherwise I [might] lose it."

Stewart's late improvement to eighth allowed him to maintain the points lead, which now sits at a single point over Plessinger with three races remaining. Martin moved up one position to third, 16 points out of the lead.

Monster Energy Supercross continues next Saturday, April 23, with its debut from Gillette Stadium in Foxborough, Massachusetts, for the 15th race of the season.