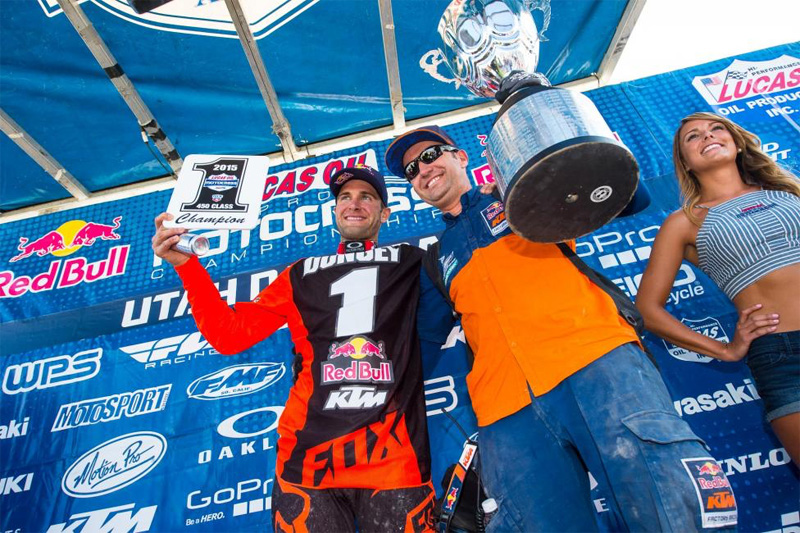 The most talented and star-studded field in the history of the Lucas Oil Pro Motocross Championship, sanctioned by AMA Pro Racing, is set to wage war over the course of 12 rounds and 24 motos this summer in the sport's most prestigious quest to crown a pair of national champions.

This Saturday, May 21, the 2016 season will commence with the 48th running of the GoPro Hangtown Motocross Classic in Sacramento, California, as reigning 450 Class Champion Ryan Dungey and back-to-back 250 Class Champion Jeremy Martin become the first Minnesota natives to jointly begin their respective title defenses against a fierce list of challengers.

Since wrapping up his third 450 Class Championship last August, Red Bull KTM's Dungey has continued to cement his place amongst the sport's all-time greats. In the recent Monster Energy AMA Supercross season this past winter and spring, Dungey amassed one of the most statistically dominant title runs in the history of that championship, which gives him a huge wave of momentum heading into the Lucas Oil Pro Motocross Championship. Last season Dungey captured the supercross title leading into the Nationals and carried on to secure the 450 Class title thanks to his trademark consistency.

In the five decades of motocross in America, there may not be a rider that has been more consistent throughout his career than Dungey and it is that distinction that makes him a favorite to become just the second rider in Lucas Oil Pro Motocross Championship history to win four 450 Class titles. It's also that distinction that makes the challenge his competitors face in unseating Dungey that much more daunting.

Throughout his career if there has ever been any sense of weakness in Dungey's efforts it has come at Hangtown. In nine combined starts at Prairie City SVRA, both 250 Class and 450 Class, Dungey has never stood atop the podium at the famed facility.

It remains the only track in the championship that the Minnesota native has never one at, but despite going winless thus far in his career at Hangtown, Dungey has finished off the overall podium just once there and has amassed five straight runner-up finishes. While it's a stretch to call that a weakness given Dungey's legacy, history suggests Hangtown is the opportunity the rest of the 450 Class field needs in order to start the season with some momentum. 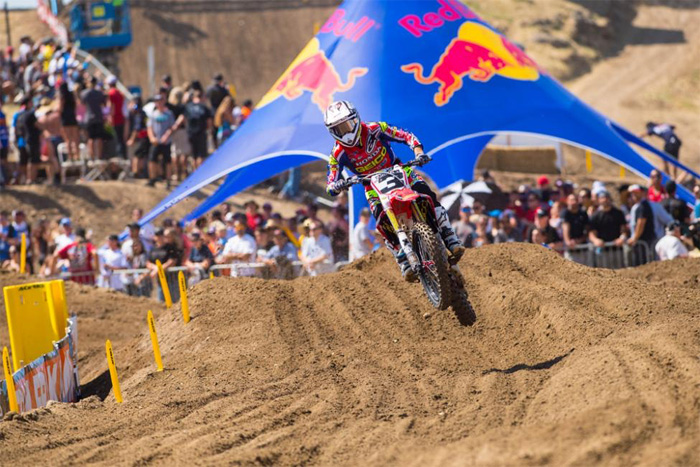 Eli Tomac enters Hangtown as the defending overall winner and will contest the 2016 season with a new team at Monster Energy Kawasaki - Photo: Simon Cudby
Just last season in Sacramento Eli Tomac dominated the 450 Class field en route to his second career overall win in the premier class. His victory in last season's final moto by over 90 seconds is one of the all-time largest margins of victory in the history of the championship and shows he is more than capable of defending his Hangtown win on Saturday. While Tomac enters the Nationals with a new team at Monster Energy Kawasaki, the new relationship is blossoming heading into Hangtown.

Tomac capped off his supercross season with three consecutive podium finishes and took his lone win of that championship at the motocross-influenced Daytona Supercross. After winning the first five motos of the season in convincing fashion one year ago, Tomac was sidelined with season-ending shoulder injuries and in no doubt returning to the Lucas Oil Pro Motocross Championship looking to take care of unfinished business.

Another rider surely ready to got bar to bar with Dungey and Tomac all summer long is RCH Soaring Eagle/Jimmy John's Suzuki Factory Racing's Ken Roczen. The 2014 series champion endured through a tough title defense last season and entered Hangtown battling a back injury. The German rider rebounded as the season wore on, but like Tomac he enters Hangtown looking to rectify last season's misfortune at the opening round. With five wins during the supercross season, Roczen is arguably faster and more confident than ever before entering the Lucas Oil Pro Motocross Championship.

In addition to Tomac and Roczen, Dungey's contingent of challengers will also consist of former winners Justin Barcia, and his Autotrader/Monster Energy/Yamaha ride, as well as Team Honda HRC's Trey Canard. Rising stars like Rockstar Energy Husqvarna Factory Racing's Jason Anderson and Team Yoshimura Suzuki's Blake Baggett are also looking to build off promising rookie seasons and break into the win column while former champion James Stewart, one of only two riders in history to complete a perfect undefeated season, makes his highly anticipated return to action with Team Yoshimura Suzuki for the first time since the 2014 season. 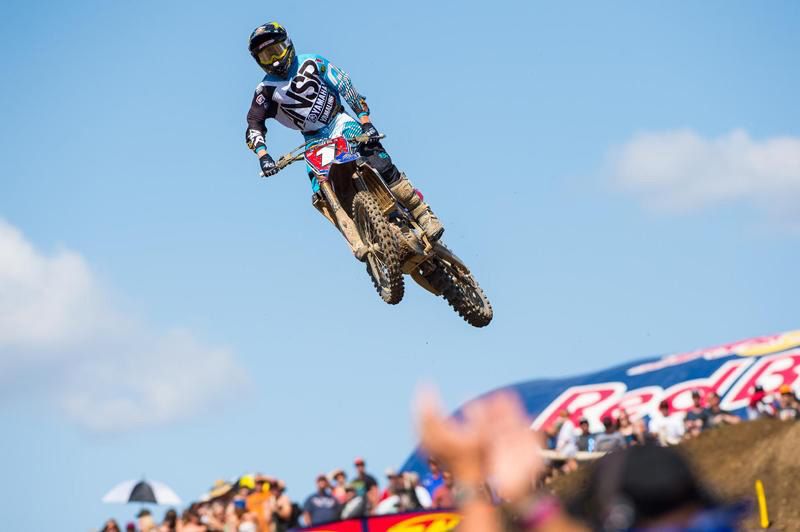 Jeremy Martin will attempt to become the fifth rider in 250 Class history to win three straight championships in 2016. - Photo: Simon Cudby
For the past two seasons Yamalube/Star Racing Yamaha's Jeremy Martin has used the 250 Class as his platform to show the world he's ready to become the next superstar of the Lucas Oil Pro Motocross Championship. After taking the series by storm and surging to the forefront of the division in 2014, Martin has maintained his role as the 250 Class' most dominant figure.

He endured an epic battle for the championship last season with Marvin Musquin to eventually become the first repeat champion since Ryan Villopoto in 2007 & 2008. With the dawn of a new season approaching, Martin is once again the rider to watch as he chases even more history and looks to become the fifth rider to claim three straight championships.

With back-to-back overall wins at Hangtown, it wouldn't be a surprise if Martin kicks off his title defense with another triumphant outing in Sacramento.

With Musquin's move into the 450 Class for the 2016 season, Martin's biggest challenge will come from several riders. Leading this group is his Star Racing Yamaha teammate Cooper Webb. With back-to-back 250 regional supercross titles to his credit, Webb stands alongside Martin as the sport's most promising young stars. He has three career wins and has no shortage of confidence, which should add intrigue to the inter-team rivalry.

The Monster Energy/Pro Circuit/Kawasaki duo of Joey Savatgy and Adam Cianciarulo want to put their iconic team back into pinnacle of the 250 Class and hope to add another national title to team owner Mitch Payton's mantle. Savatgy was the breakout rider of the 2015 season and captured his first career win en route to third in the championship.

A strong supercross campaign this year left him just one point shy of a title and has given Savatgy a ton of motivation to come out swinging at Hangtown. While there has unfortunately been very little of Cianciarulo in Lucas Oil Pro Motocross due to a series of heartbreaking injuries, he remains one of the sport's hottest prospects. Winning and Cianciarulo have been synonymous throughout his career thus far and many believe that if he can stay healthy he has the potential to be a title contender.

The 250 Class is known for producing some of the wildest and most competitive racing at the Nationals and while Martin's experience is sure to work into his favor, there's no shortage of hungry young riders ready to make a name for themselves.