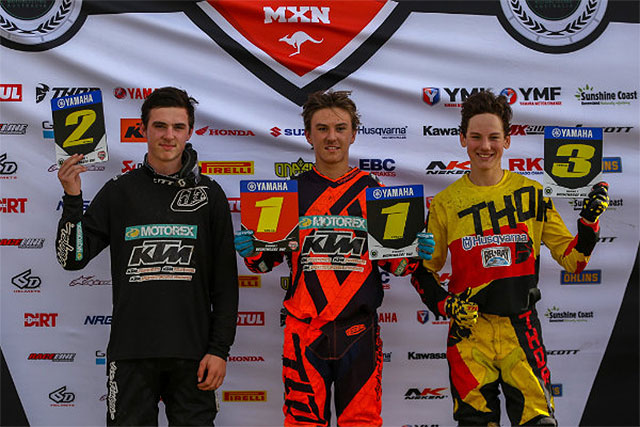 The Yamaha Junior 125cc Cup category lined up for the first time this season at Round 1 of the Motul MX Nationals at Wonthaggi yesterday with KTM mounted Regan Duffy battling tough competition to collect a maiden victory at his first National outing for the year.

With the opportunity to race alongside the best in the country, Australia‰Ûªs junior athletes revelled in the prime track conditions at Wonthaggi yesterday, with an impressive 34 junior riders taking to the track as the support class for the round.

Riders took full advantage of the practice and qualifying session yesterday morning, with all competitors throwing down their fastest lap over 20 minutes. And once the session had wrapped up, it was Husqvarna Australia‰Ûªs Bailey Malkiewicz who secured the fastest lap time with a 1:52.990, only .22 seconds the margin between him and second fastest on track Duffy (KTM). Yamaha mounted Jack Kukas was third fastest (1:54.972) ahead of KTM‰ÛªS Mason Semmens and Dante Hyam who completed the top five qualifying times.

In race one it was KTM Junior Motocross Racing Team‰Ûªs Semmens who shot off into the early race lead where he stayed for the duration of the 15-minute moto, crossing the line with the race one victory for the first time in 2017.

Duffy held off fastest qualifier Malkiewicz on the deteriorating Wonthaggi surface to finish race one in second, while despite getting to an impressive start, Malkiewicz wrapped up his first race of the season in third. Hayden Matterson, Mat Fabry, Callum McGlade and Mason Rowe all took positions four through to seven, while Zac Wright, Liam Andrews and Tyler Darby completely the top ten in moto one.

In race two however, it was Duffy‰Ûªs turn to take the spoils. Duffy led from the gate drop all the way to the chequered flag in the 125cc class‰Ûªs second appearance for the day, crossing the finish line 18.063 seconds ahead of second place getter Semmens, while another 14.87 seconds behind him was Liam Andrews who finished third.

At the conclusion of both motos yesterday afternoon, Duffy‰Ûªs 2,1 results handed him the top step of the 125cc Cup podium on a countback. Despite finishing equal on points second overall was taken by fellow KTM rider Semmens after finishing in second in moto two, while third place was collected by Malkiewicz at Wonthaggi.

‰ÛÏWe‰Ûªre really happy to finish the first round with a win at Wonthaggi ‰ÛÒ the track was pretty brutal today but we made some good points,‰Û