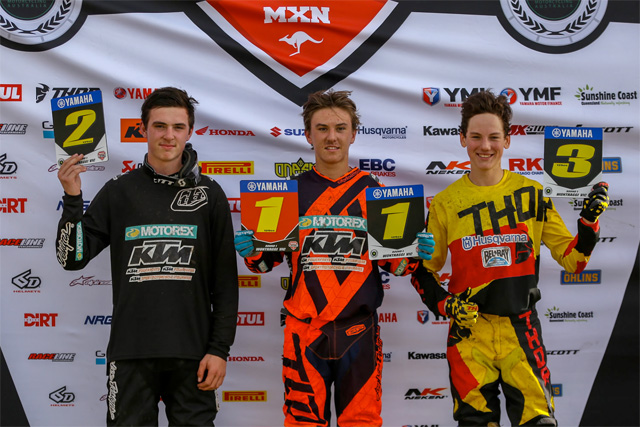 When KTM Factory Junior Team racers Regan Duffy and Mason Semmens finished 1-2 in the first round of the Yamaha 125cc Gold Cup at Wonthaggi‰Ûªs MX Nationals opener after taking a moto win apiece, they once again confirmed the validity of KTM‰Ûªs junior program.

Two-time Aussie junior champ Semmens, in his fourth year with the factory squad, and Duffy in his second, are part of the next generation of Aussie schoolboy motocross stars.

KTM has already in the last six months, seen 2016 team members Caleb Grothues and Noah Smerdon graduate to overseas rides. After a successful 2016 in which the team claimed three Australian championships and five podiums, the team has brought two fresh faces on board for season 2017, 13-year-old Blake Fox from Dubbo, NSW and 12-year-old Deegan Mancinelli from Ingham in Queensland.

Mancinelli will compete aboard the KTM 85 SX big-wheel and was the Australian Vice Champion in 65cc 11 Years in 2016.

KTM has a highly-competitive range of Ready to Race motocross machines that stretches right from the KTM 50SX Mini right through to the KTM450 SX-F ridden by Kirk Gibbs, and Junior development has always been an important part of KTM‰Ûªs philosophy.

The KTM Junior Racing Team is one of the most successful Aussie junior teams of recent years, having amassed an incredible tally of state, national and world titles in the last few years, and Factory Junior Team Coordinator Tam Paul has a fresh bag of targets on the radar in 2017.

"It‰Ûªs exciting to be looking at another year for the KTM Junior Team, where we have the reigning dual champion moving into the premier 15-year-old class in Mason Semmens, and Regan Duffy with dual podiums from the 2016 KTM Junior Motocross Championships." Tam Paul, KTM Factory Junior Motocross Team Coordinator said.

"Blake Fox is the current 85 small-wheel Aussie champion and Mancinelli is a multiple national and state level podium place-getter. These two new young riders have got a lot to offer the team, and us them in return, and we‰Ûªre very excited to move forward.

"We had originally penciled Caleb in for a ride with our development team, Raceline, but we were happy to see him get the ride with Husqvarna in Europe instead.

"Noah Smerdon has won three Australian titles already and his family had the opportunity to move to the USA to follow their dreams to race full-time, so we wish them all the best.

"It‰Ûªs good for KTM to develop these you riders and see them progress to international opportunities. It means we‰Ûªre doing something right. We give them the tools and the support to progress."