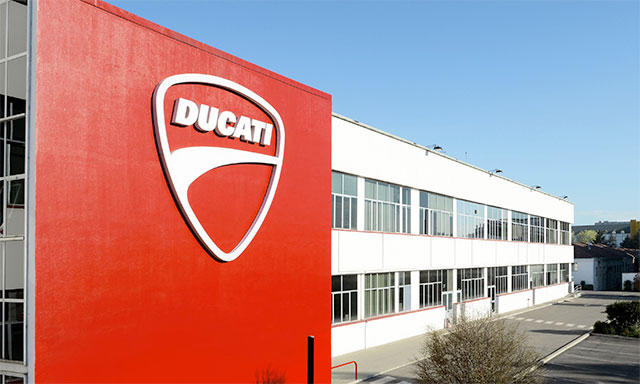 Ducati Group is showing a consistent growth rate - closing 2015 with 54,809 Ducati motorcycles delivered to owners worldwide. The growth in sales allowed the turnover figure to exceed 700 million Euro, with operating profit at 54 million Euro and an operating return on sales of 7.8%.

The financial figures of the Audi Group - of which Ducati is part - relating to the fiscal year 2015, were presented at the annual press conference held at the AUDI AG headquarters in Ingolstadt.

Deliveries have increased by 21.5%, for a total of 54,809 motorcycles sold - almost 10,000 more than in 2014. In this record year, Ducati grew even faster than the global motorcycle market, and achieved a market share of 5.4% in the over-500 cc motorcycle segment, an increase of 0.9% compared to the previous year.

This result translates to 702 million Euro revenues, with a 22% increase compared to the financial year 2014 (575 million Euro). At the close of the 2015 fiscal year, Ducati Group achieved an operating profit of 54 million Euro - up by 12.5% compared to 48 million Euro in the previous year.

"In the course of this past financial year, Ducati demonstrated the effectiveness of the strategy followed in the past three years, based on investment in product, quality and customers. This growth is reflected not only by volumes but by all the main financial indicators and shows how the company today is solid and well prepared for future challenges," said Claudio Domenicali, Ducati CEO.

The 2015 result is also the fruit of the company‰Ûªs constant investment in new technologies and new models. This investment effort has enabled Ducati to present nine new models for the year 2016, including the XDiavel, Multistrada 1200 Enduro and Scrambler Sixty2, with which Ducati has entered three new segments - the "Cruiser", "Off Road" and the below-500 cc capacity segments, respectively. Thanks to this further enlargement of the product range, Ducati can look to the future with optimism and confidence, and expect to continue its growth trend.

The sales network of the motorcycles manufacturer now includes more than 720 dealers in over 90 countries and, in the course of 2015, has led to an increase in deliveries in almost all the world regions. North America is confirmed as Ducati's largest market, with 12,136 delivered motorcycles (+14% compared to 2014). In Italy, the company has achieved a 53% increase in sales for a total of 6,569 motorcycles. Other sales records were achieved in the rest of Europe, where Ducati increased total deliveries by 31.2% to 21,473 units, with a 24% increase in Germany and a 37% increase in the United Kingdom.

Asia-Pacific area markets also trended well: Ducati delivered 6,502 motorcycles (+12%) in total in these regions, also strengthening its presence in China, up by 46%.