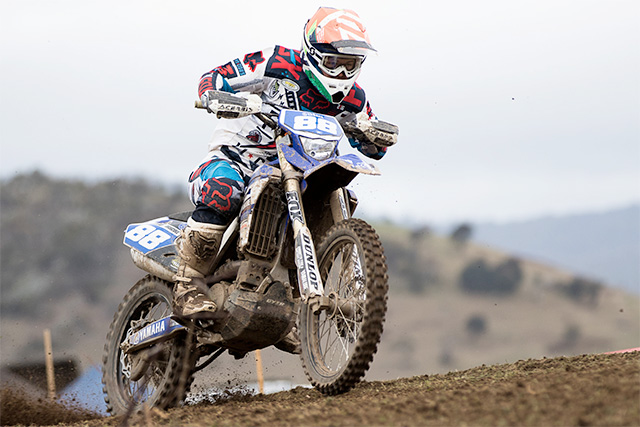 Yamaha supported Michael Driscoll proved he is an off road racer of the future after claiming the 2017 EJ (under 19) class win at the 2017 Yamaha Australian Off Road Championship on a cold and wet Sunday afternoon in Omeo, Victoria.

The 2017 championship wrapped up on Sunday where Driscoll and series rival, Fraser Higlett, were looked in battle and entered the final rounds with just two points separating the pair, with Higlett holding the advantage. But with the two-round weekend, the two point buffer was nothing and it came down to a weekend shootout with the winner taking all.

Driscoll started the weekend in perfect style, winning the X-Country formatted event while Higlett came home in second and giving the Yamaha rider a small points gap heading into the 12th and final round on Sunday.

With plenty of nerves in his system, Driscoll didn‰Ûªt need to win the final round, but he did need to beat Higlett to claim this championship, regardless of where the pair finished. And he executed it with precision. He kept his eyes firmly focused on the prize, with Nic Tomlinson taking the round win, Driscoll took second place just ahead of Higlett and crossed the finish-line with his fist in the air, triumphant of a championship win.

‰ÛÏThis is my first year of racing off road and I‰Ûªm amazed at how things have turned out," Driscoll said. "As a junior, I did a lot of motocross and the odd off road event but I have had an awesome time doing off road full time this year and winning is a result of a lot of hard work myself, my family and my sponsors have put in.

‰ÛÏThank you to Yamaha for their support of not just me but also the AORC and Transmoto, our class sponsor. I also want to thank Fraser for some great racing this year and I look forward to many more battles with him in the future,‰Û