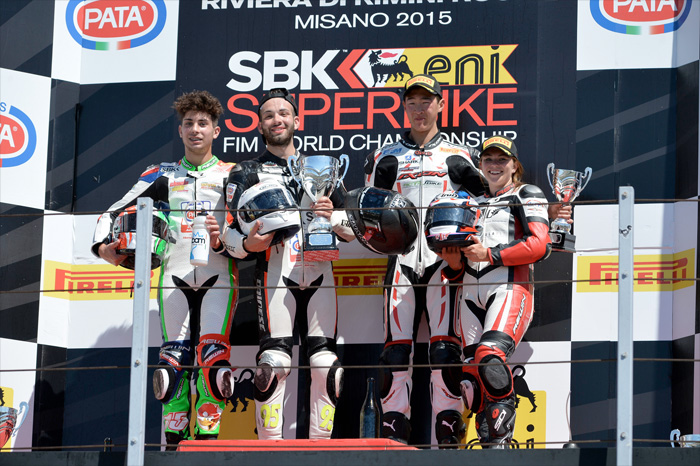 The sixth-round Pata European Junior Cup, powered by Honda, race at Misano, Italy ended in dramatic style this afternoon with race and series leader Javier Orellana getting knocked off his Honda CBR650F just three corners from clinching the 2015 title.

The Spanish rider led into the final lap knowing that victory in today‰Ûªs 10-lap race at the 4.226km Misano World Circuit would allow him to secure the 2015 European Junior Cup with two rounds to spare. However, he was pursued hard by Italy‰Ûªs Emanuele Pusceddu, who was placed fourth in the points table.

As the leading pair hit the fast turn 12, Pusceddu lunged for lead but, instead, collided with Orellana, sending both riders into the gravel trap, thankfully unhurt.

The race was consequently won by Italian Guiseppe de Gruttola, who celebrated his 20th birthday today in some style, with Alfonso Coppola finishing in second place, just six thousandths of a second (0.006s) behind his compatriot. French rider Guillaume Raymond, who was Orellana‰Ûªs closest challenger in the title race going into today‰Ûªs encounter, finished third.

"I am so happy for this win today as it is also my birthday! It was a very beautiful race, with many overtakes. I want to thank my team for the good work they did to achieve this victory at my home race." Gruttola said.

New Zealand‰Ûªs Avalon Biddle finished in the points in 15th place this afternoon, so taking victory in the FIM Europe Women‰Ûªs European Championship.

Despite his DNF today, Orellana still retains a 34-point lead in the standings over Raymond and the 17-year-old can clinch the title at his home race in Jerez, Spain on 20 September.