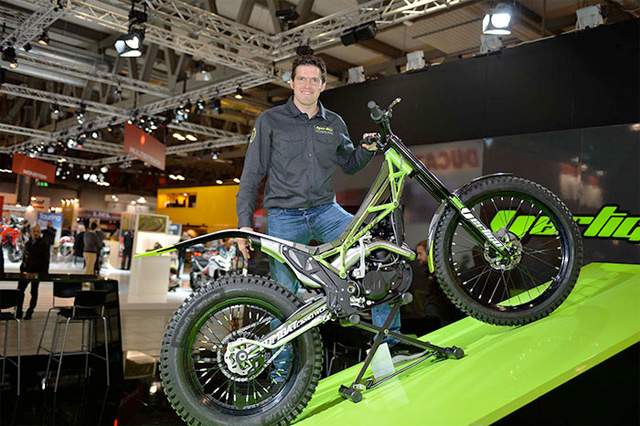 Red Bull athlete Dougie Lampkin was on hand to lift off the covers on the all-new Vertigo Combat Trial bike in Mila.

The twelve times FIM Trial World Champion who will act as the Vertigo Sports Team Manager and a brand ambassador for the newly formed Spanish manufacturer has been instrumental in the design and development of the Combat model that sets new standards within its specialised sector.

After two years in the planning and almost a full year of testing and refinement, Vertigo chose Dougie to unveil their new model to the World‰Û÷s media at the famous EICMA exhibition held in Milan, Italy. After a few words from Lampkin the all new bike was revealed and was met with immediate applause and praise from those present who were stunned at its incredible design and sheer quality.

Further afield news of the Vertigo with images of the new bike and Dougie were online within minutes on websites from as far afield as Japan and America carrying stories instantaneously, whilst all the major social media platforms were also full of Vertigo and Lampkin content without hardly any delay.

Dougie will remain in Milan for the remainder of the week to explain about the new Vertigo Combat and the ethos of the project to the many hundreds of media and thousands of visitors who come through the doors of this global exhibition over the coming days.

"It felt like Christmas morning, just how I remember it when I was a kid." Lampkin Speaking immediately after the unveiling process. "After so many months and thousands of man hours to reach this point it was hugely exciting to reveal to everyone what we have been doing behind closed doors and in secrecy for so long."

"Obviously I am immensely proud to have been able to lift the covers off the bike and show to the World what the new Vertigo looks like in the flesh. As a team we are delighted with what we have achieved so far and from the initial reaction this morning the people love it too, which is great news for all of us."

"Whilst today is an important step in the Vertigo story it is just the start of what I am sure is going to be an amazing journey and one I am very pleased to be involved with."

"Once the dust has settled after today, we can then start to think about the future, as hopefully it will not be too long before we can share some more exciting news with the World. So as they say watch this space." Lampkin concluded.