Double win for Bou in Germany 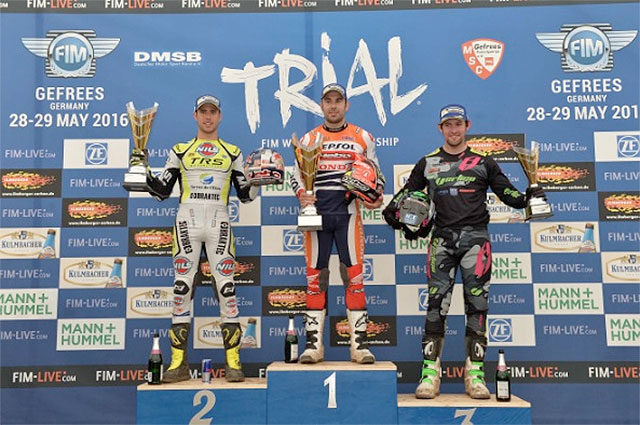 Toni Bou extended his lead at the top of the 2016 FIM Trial World Championship after he recorded his second win of the weekend on day two of the German Grand Prix held at Gefrees.

After a tense opening tour, the Repsol Honda rider rode himself well clear of his rivals over the remaining two laps to take his latest victory by seventeen marks. Again it was Adam Raga ‰ÛÒ TRS who was runner up to Bou, as James Dabill ‰ÛÒ Vertigo claimed his second podium place of the season to complete today‰Ûªs top three.

Rain Saturday night increased the severity of Sunday‰Ûªs Trial resulting in modifications to two of the twelve sections, but apart from a very light shower early on, the forecast inclement weather never arrived and for the second day running the competition took place in warm and dry conditions.

Equally, whilst Bou was not challenged by Raga over the closing stages, Adam also had a comfortable gap over his rivals towards the end of the Trial, meaning the real fight was for the final podium place. Dabill was the rider to eventually claim this conveted position, but he had to see off the attentions of both Jaime Busto ‰ÛÒ Repsol Honda and Busto‰Ûªs team-mate Takahisa Fujinami ‰ÛÒ Repsol Honda ‰ÛÒ who ended the day fourth and fifth respectively with six marks splitting this battling trio. 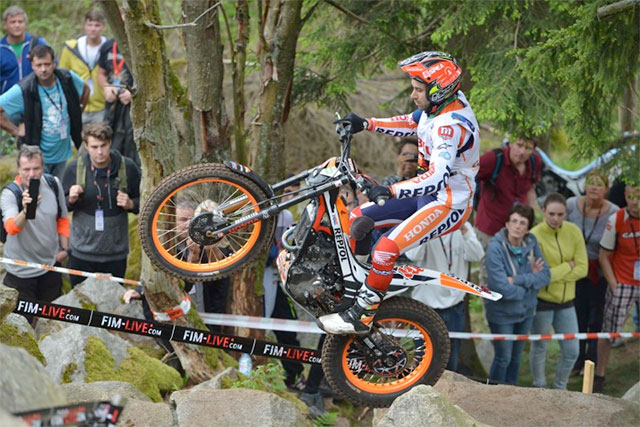 Toni Bou
Outside of the top five, Jeroni Fajardo ‰ÛÒ Vertigo had a day he will probably want to forget as he ended up in a distant sixth spot, whilst in contrast Eddie Karlsson ‰ÛÒ Montesa enjoyed his best result of the 2016 campaign after he came home in seventh position. Pol Tarres ‰ÛÒ TRS, Franz Kadlec ‰ÛÒ Gas Gas and Jorge Casales ‰ÛÒ Beta were the last three riders inside Sunday‰Ûªs top ten respectively.

Reflecting on his fourth victory of the season Bou said. ‰ÛÏToday I rode with my shoulder strapped and also with a support and this proved to be much better than yesterday. I hurt it slightly when I crashed in section seven on the first lap, but after that it has not caused me any real problems. From my results you can see I improved each lap and in the end I managed to make a good gap over Adam (Raga) by the end of the Trial. Overall it has been a good weekend for the championship and now I can look forward to the next round in Andorra.‰Û