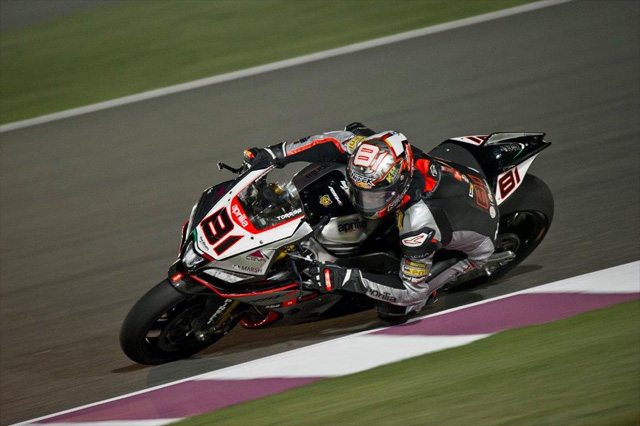 The penultimate race of the 2015 WorldSBK season has been won under floodlights at the Losail International Circuit by Jordi Torres (Aprilia Racing Team ‰ÛÒ Red Devils), with Jonathan Rea and his KRT team-mate Tom Sykes joining him on the podium.

In race one it was who Sykes led from the start, before being passed by Rea and Torres, the Spaniard pulling off an incredible move around the outside of the former champion into turn one at half distance.

Interestingly, Torres‰Ûª maiden win in WorldSBK maintains Aprilia‰Ûªs 100% record of podium finishes at the Qatari venue, with the Spanish flag waving at the top for the first time since 2012 at Miller Motorsports Park, when Carlos Checa won the first race. 2015 World Champion Rea gave chase but had to be content with second, his 65th podium.

Alex Lowes was riding superbly in 3rd in the first half of the 17 lap encounter until his Voltcom Crescent Suzuki hit problems at turn 1 on lap 8.

There was drama at the start for Leon Camier who suffered a technical problem on the grid after the warm up lap with his MV Agusta Reparto Corse machine, the British rider will hope to make amends in the final race of the season.

‰ÛÏI am really happy about the win in Race 1, also for my team." Torres said. "I have found a second family with Aprilia.

"The guys worked hard all season to help me grow and learn . I knew I had a good pace, but I was sure that my rivals would not give up. At the last turn I expected Rea to attack and I decided to brake hard, staying on the inside. Incredibly, he braked even harder, but I had a better line and that let me stay ahead of him.

"Winning after a duel with the great names in the championship is something that I had always hoped for. It's a shame about Race 2. I didn't have the same feeling with the front and, pushing hard to stay in the lead group, I crashed.‰Û 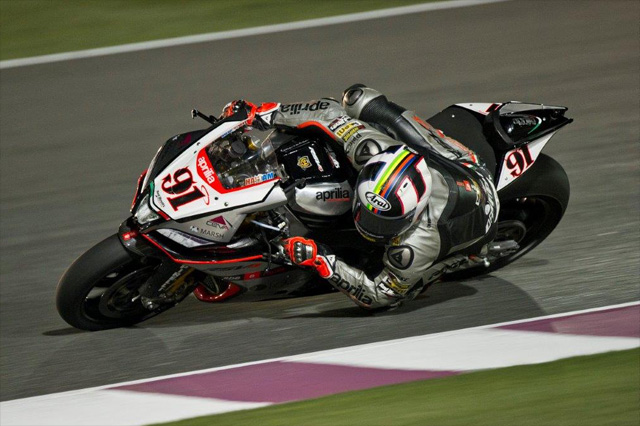 Leon Haslam took his second win of the year in race two at Qatar
The final FIM Superbike World Championship race of 2015 was won on the final lap after another race-long fight as Leon Haslam (Aprilia Racing Team ‰ÛÒ Red Devils), who took his second win of the year and the fifth of his WorldSBK career, beat Chaz Davies (Aruba.it Racing ‰ÛÒ Ducati SBK Team).

In securing 2nd, the Welshman also claimed the runner-up spot in the final standings ahead of Tom Sykes (Kawasaki Racing Team), who came home third. Leon‰Ûªs winning margin was 0.110s and his victory gave Aprilia a double win in the season finale, just as they had one year ago under Qatar‰Ûªs floodlights.

Michael van der Mark (Pata Honda World Superbike) completed his debut WorldSBK year with another strong showing, the Dutchman finishing fourth after running in the leading group for the first 12 laps, before dropping back a little in the closing stages.

The other big news of Race 2 was Jonathan Rea‰Ûªs first DNF of the season, which put an end to his hopes of setting a new outright points record in the series; the 2015 World Championship had to pull out on lap 6 as his KRT machine suffered a technical problem.

Sylvain Guintoli was fifth on his last race for Pata Honda. The 2014 champion ended the night‰Ûªs second 17-lap encounter a fraction of a second ahead of Leandro Mercado (Barni Racing), who took a season‰Ûªs best sixth.

Xavi Fores (Aruba.it Racing ‰ÛÒ Ducati Superbike Team) did not compete in Race 2 after withdrawing through illness while Alex Lowes retired his Voltcom Crescent Suzuki at the end of the opening lap. Leon Camier (MV Agusta Reparto Corse) was able to start the second encounter but he too to finish for the second time today.

"We knew that the Aprilia would be fast here, even if my weekend didn't get off to the best of starts. We worked hard to get back on track but unfortunately in Race 1 I had some trouble braking that caused me to stress the system as well as my arm, which suffered in the second part of the race.

"The changes we made before Race 2 turned things completely around. The RSV4 was working great and it wasn't difficult to maintain a good pace. I kept on attacking down to the end when I pushed hard to finish my season the way it had begun. We've had our ups and downs this season but we never let up. This win is the just reward.‰Û 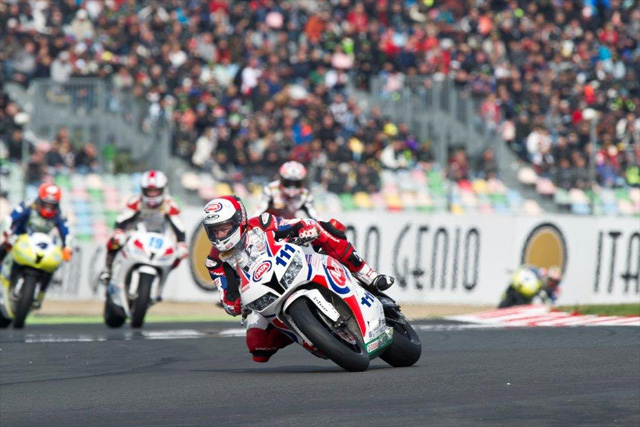 Smith had several moments but was able to fend of 2015 Supersport World Champion Kenan Sofuoglu (Kawasaki Puccetti Racing), taking the win by 0.971s at the flag. For Sofuoglu, who wrapped up his fourth World Supersport crown this year it, was his 69th career podium in second, while Lorenzo Zanetti (MV Agusta Reparto Corse) secured the third place in the overall championship standings by taking the final podium spot.

Lucas Mahias finished a lonely 4th after running at the front aboard his MG Competition Yamaha early on, while PJ Jacobsen (CORE' Motorsport Thailand Honda) and Nico Terol (MV Agusta Reparto Corse) rounded out the top 6.

Gino Rea (CIA Landlords Insurance Honda) was unable to convert his front row start into a result, dropping to 11th at the start before crashing on lap 9.

The 2016 season for World Superbike kicks off at Phillip Island, Australia, next February 26-28.