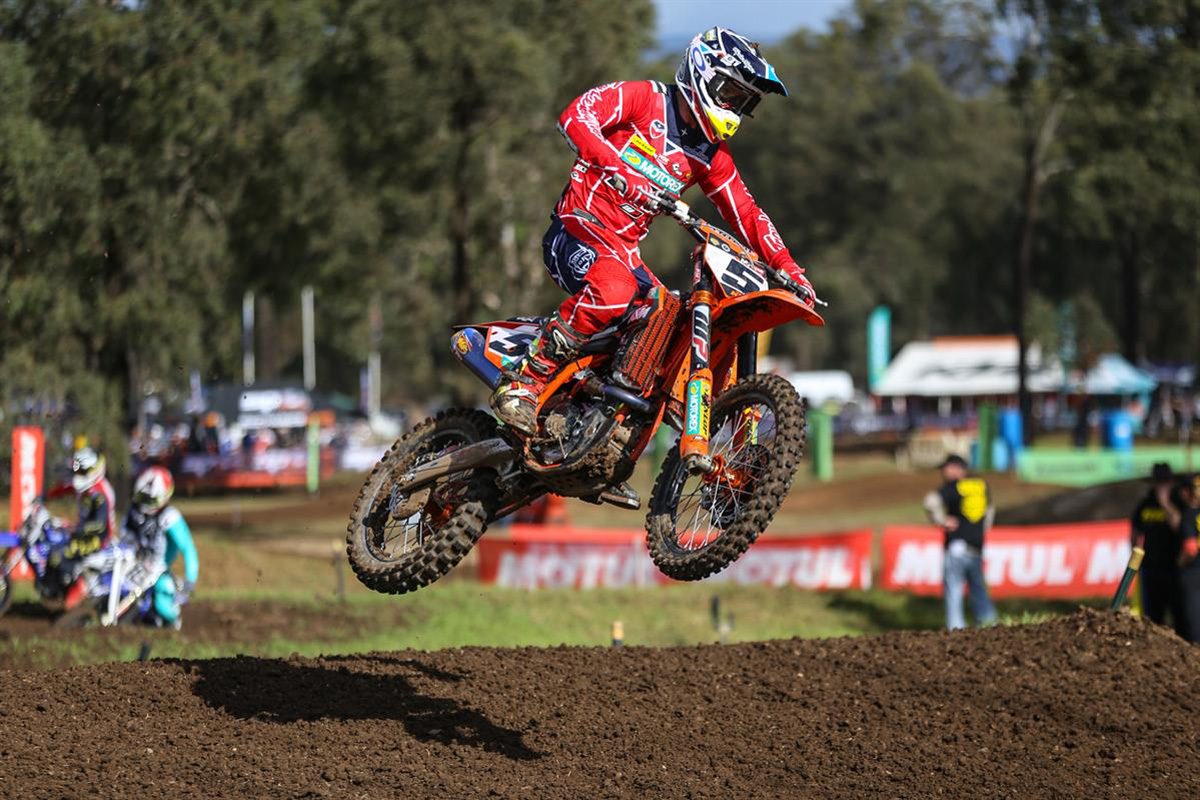 Kirk Gibbs has made it no secret that he is out to win in 2018 and despite just coming up short at the first two rounds, feels as though everything is clicking - Credit: MXN Images
It was a strong weekend for the KTM Motocross Racing Team at Appin‰Ûªs second round of the 2018 MX Nationals in New South Wales today, as MX1 class contenders Kirk Gibbs and Luke Clout finished second and third respectively, while defending champion Egan Mastin collected sixth overall in MX2.

Gibbs and Clout qualified for the Super Pole session, setting the second and fourth fastest times aboard their KTM 450 SX-F machines. In race one, Gibbs latched onto the lead pack, never giving up as he put a last corner pass to snatch second position by a mere 0.007s.

Gibbs also put on a strong showing in the final outing, overcoming a mistake to ultimately wind up fourth and, as a result, he still holds second in the standings, while Clout has been promoted to third.

‰ÛÏI‰Ûªm disappointed in some ways because I just feel a lot more confident and happy with the way I‰Ûªm riding, so that‰Ûªs why I think it hurts even more to finish second now." Gibbs commented. "Everything‰Ûªs clicking and I‰Ûªm in the right position to win, but it‰Ûªs just not happening for me.

"I started off the day well, in the first moto I was sitting around fourth, got into third and put on a hard charge for second. That second moto I was just sitting there, I didn‰Ûªt really feel anyone flicked the switch and took off, so I slowly started to chip away at them and made a little mistake, went down and that‰Ûªs all she wrote. It‰Ûªs frustrating that a little mistake rewrites the whole day.

"Second overall is still good, but the points deficit is getting bigger and you don‰Ûªt really want to give too much of a buffer at this point of the year.‰Û 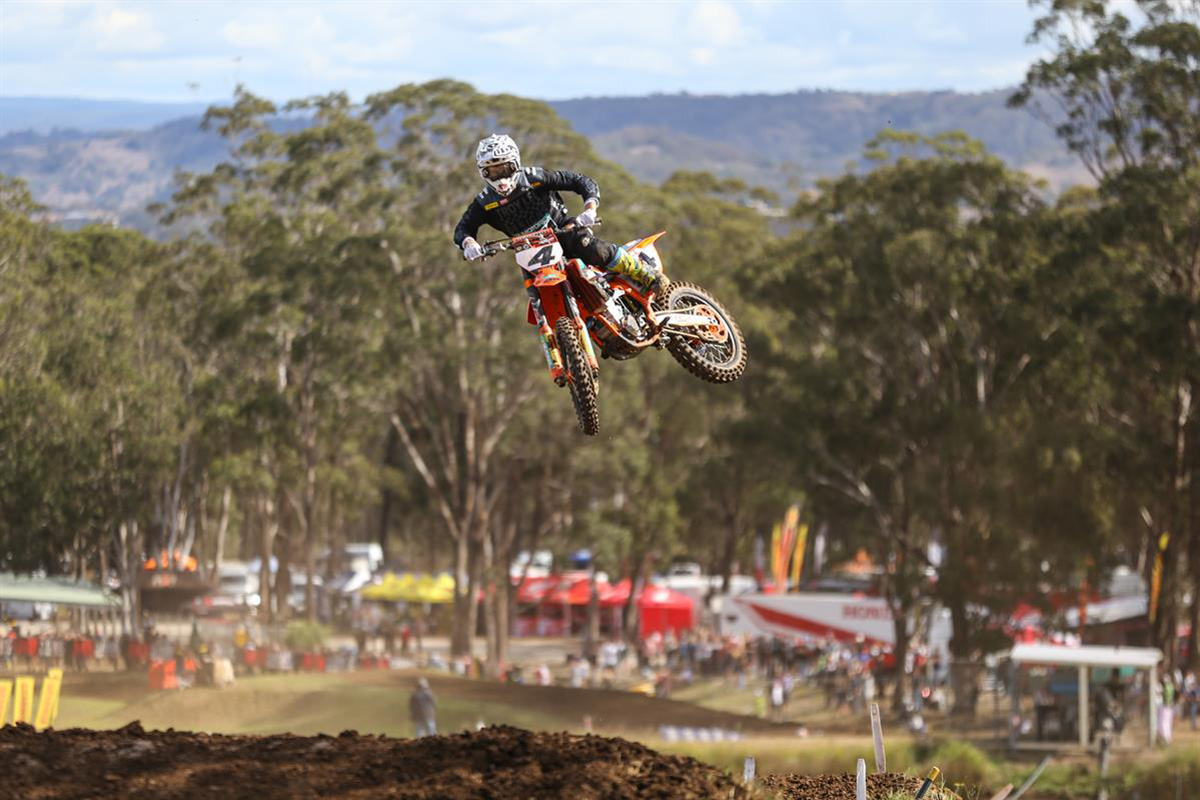 Luke Clout was pumped with his first podium result for the KTM Racing team but also felt a little disappointed after missing out the win in moto 2 - Credit: MXN Images
With a home crowd behind him, Clout pushed through for fifth in the opening affair, but it was race two that would see the youthful talent shine as he led the field both prior and following a race restart, relinquishing the lead in the final stages to earn his best race result of the year with second.

‰ÛÏIt‰Ûªs good to get the monkey off my back and get the first podium with the KTM Motocross Racing Team." Clout said. "These boys work super-hard and to repay them is a good feeling.

"I was kind of disappointed I let the race win slip, but Dean [Ferris] really picked it up in the end. I‰Ûªve got a bit of work to do, but I think I showed some good speed today, rode smoothly and didn‰Ûªt let him fluster me, so I think that‰Ûªs positive. I‰Ûªm pretty happy and - like I said - I would‰Ûªve liked to have won the last one, but second is good as well, so I‰Ûªm happy with it.‰Û 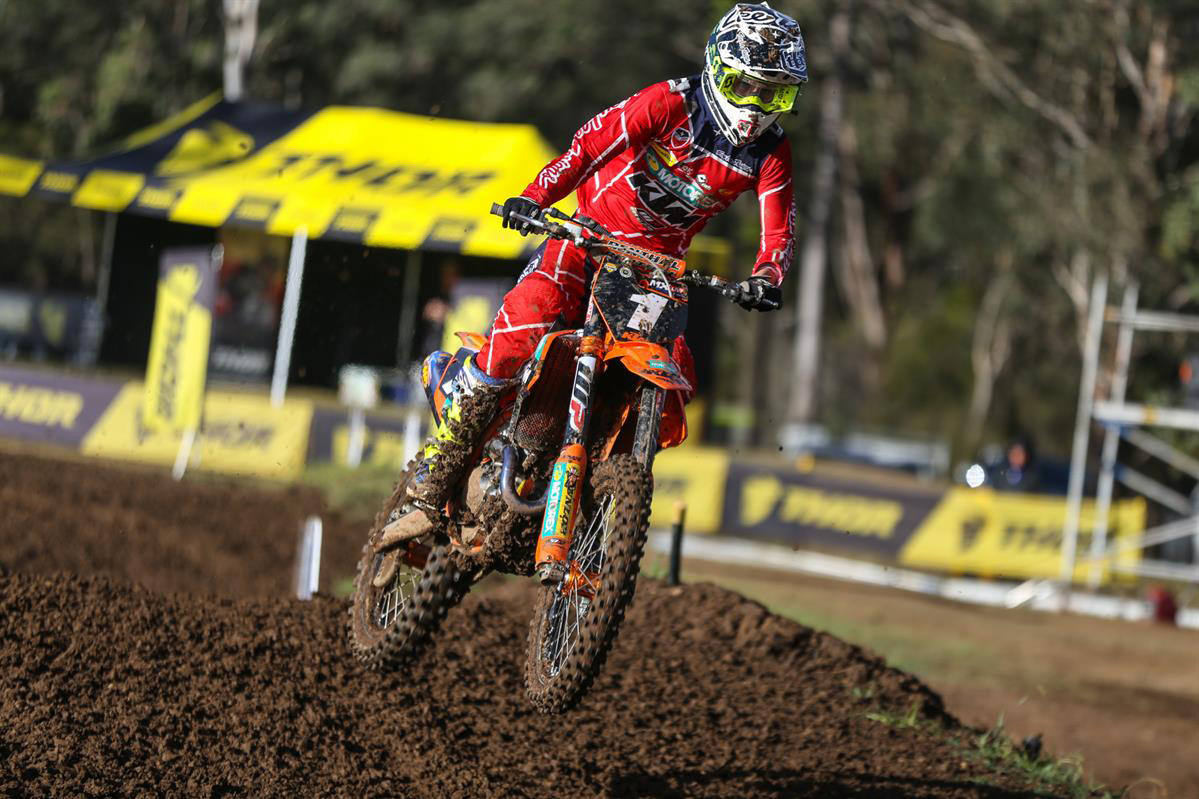 Last years MX2 Champion is heading to the practice track to find the final 1 or 2% he feels is missing in his racing at the moment - Credit: MXN Images
It was a challenging day for number one plate-holder Mastin, who struggled to come to terms with the technical, rutted hillside circuit. A battle with arm-pump also played against the New South Welshman as he mustered up a 7-6 scorecard onboard his KTM 250 SX-F, positioning him eighth in the standings as the series heads to Wonthaggi in Victoria for rounds three and four on 19-20 May.

‰ÛÏIt wasn‰Ûªt the best day for me." Mastin reflected. "The first moto, I got off to a good start, but I just didn‰Ûªt gel with the track today.

"I‰Ûªm going to go back and work on a couple of things with myself and the team. There‰Ûªs only one or two percent that I‰Ûªm missing, then I‰Ûªll be there - hopefully the next round will be a lot better. I just didn‰Ûªt feel it today in the motos, got a bit of arm-pump in both of them and this has never really been a strong track of mine throughout my career.