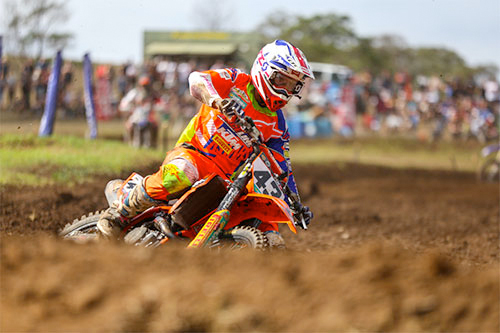 Raceline Pirelli KTM‰Ûªs Mitch Evans has notched up another two podium finishes and moved into second in the MX1 Championship after an outstanding weekend at the first double header of the season at Wonthaggi in Victoria.

Evans arrived in Melbourne with the goal to redeem himself after what was a somewhat disappointing outing at Appin, and redeem himself he did. Despite being one of the youngest in the MX1 class, rookie Evans shot up the championship leader board, and left Wonthaggi with plenty of reason to celebrate.

When Round 3 kicked off on Saturday Evans appeared in his third Raceline Performance Superpole, finishing fourth and awarding with him fourth pick of the grid. In moto one Evans steered his KTM 450-SXF to fifth place and then improved once again in moto two, charging to an impressive second position. With consistency proving crucial over the weekend, Evans‰Ûª 5-2 finishes saw him conclude day one in second overall.

With Sunday serving as the second race-day for competitors, Evans was once again determined to capitalise on the opportunity to make up crucial championship points. After finishing second in Raceline Superpole, his fourth Superpole for the year, Evans went on to record a pair of second place finishes, rewarding him and the Raceline Pirelli KTM team with second on the MX1 podium.

With two podiums at round three and four, Evans has now moved in to second in the MX1 Championship standings with six rounds of racing remaining.

‰ÛÏI‰Ûªm really happy with the weekend. We just wanted to get starts both days and that‰Ûªs what we did so I can‰Ûªt complain with the result we got at all,‰Û