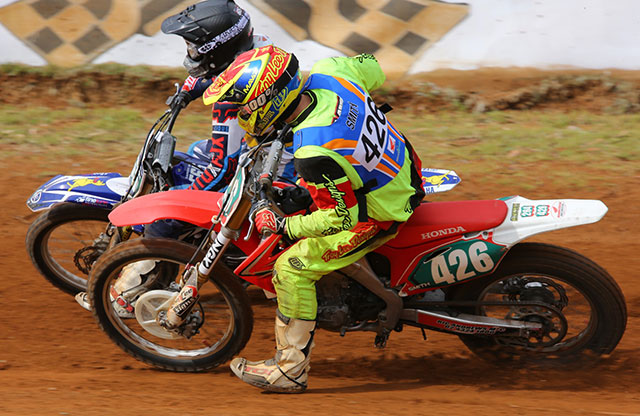 The 2016 staging of the Honda / Tumut Motorcycle Accessories Central Coast Cup meeting on the weekend produced the first ever back-to-back winners in both the senior and junior Cup events.

After a thrilling two days of action at the Somersby track the two eight-lap finals for the Central Coast Cup produced the same two winners as last year ‰ÛÒ host club rider David Smith in the seniors and Singleton‰Ûªs Billy Van Eerde in the juniors.

The heats of the senior Cup saw plenty of drama as pre-meeting favourite Jarred Brook fell in his heat and failed to qualify for the final and Peter Smith, brother of the now dual winner, also crashed and was injured after qualifying for the final.

David Smith went through a narrow gap to take the lead early in the final, and despite plenty of pressure and several unnerving moments hang on to beat two 16 year olds, Sam Davies of Kempsey and Boyd Hollis of Kurri Kurri, with another former Cup winner Sean McLellan fourth.

Heats of the junior Cup saw Caleb Porter sidelined after a crash before Billy Van Eerde scored an emphatic win in the final ahead of Mackenzie Childs with Connor Ryan an impressive third in front of Jordan Ussher. The top four are all from clubs in the Hunter region.

Not only did David Smith make it back-to back victories in the Central Coast Cup he also won the finals of both the Pro 450 and Pro 250 classes to round off his best ever result in a single meeting.

Brisbane teenager Jarred Brook managed to win both the Under 19s and the Pro Open final, and was also second to Smith in the Pro 450 and third in the Pro 250 deciders, but he left disappointed after failing to get a crack at the Cup decider.

Both Sam Davies and Boyd Hollis are still in their first year of senior competition ‰ÛÒ not that you would know it by another impressive showing from both of them.

Sean McLellan was also back to near his best after a layoff which augers well for future racing for him.

The Over 35s class added their share of excitement to the weekend as host club riders led by Peter Knight cleaned up.

All the junior racing was extremely competitive and will serve as a warm-up for the New South Wales Junior Track Championships to be staged at the same track on September 24 / 25.

While Van Eerde and Childs were the standout among the older age brackets, host club rider Senna Agius was also prominent with a mechanical problem in one race denying him a third class win for the weekend.

Max Berry from Melbourne, Harrison Voight for the Gold Coast, Travis Hall and Rowan Millar both from Brisbane all scored class wins as many of the interstaters used the weekend well in preparation for the State titles later in the year.