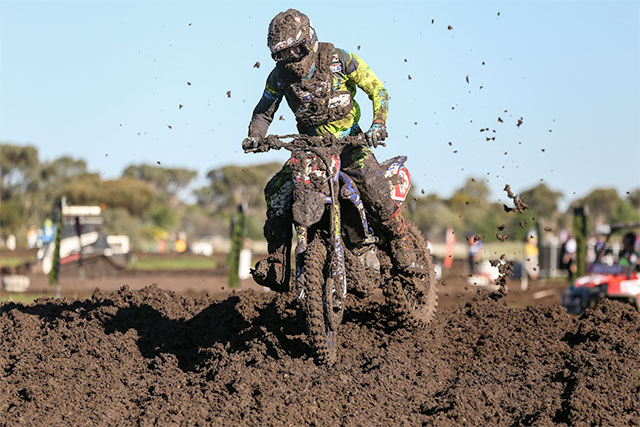 The thick, sticky mud at the clay based Horsham motocross circuit, tossed up all sorts of challenges for the Serco Yamaha duo of Mitch Evans and Jackson Richardson but despite the rough day, both remain firmly in contention for the MX2 championship, siting second and third respectively.

On a day that most riders clicked into survival mode to just circulate the difficult conditons, both Serco Yamaha riders fell from their machines at critical stages during the day and as a result, weren‰Ûªt able to cash in on their good speed.

MX2 rookie, Mitch Evans carried the points leaders red plate into the round after some sensational racing at rounds two and three. Evans was confident in the mud as he had previously done well in wet conditions but the day ay Horsham proved unlike anything he had raced before.

In moto one, Evans was in a terrible position as the field battled through turn one. To his credit, he stayed calm while there was carnage all around him and he rounded the first lap in a respectable sixth place. He continued to work away and slowly moved forward to take fourth place at the completion of the 30minute moto.

Race two and Evans wasn‰Ûªt as fortunate. He fell in the first turn and was stone last to get up and moving again. He came past the finish line on the first lap in 24th place and with a lot of work ahead of him. On a difficult track to pass, Evans managed to claw his way up to ninth place by the end of the race and round out the weekend in fifth overall. 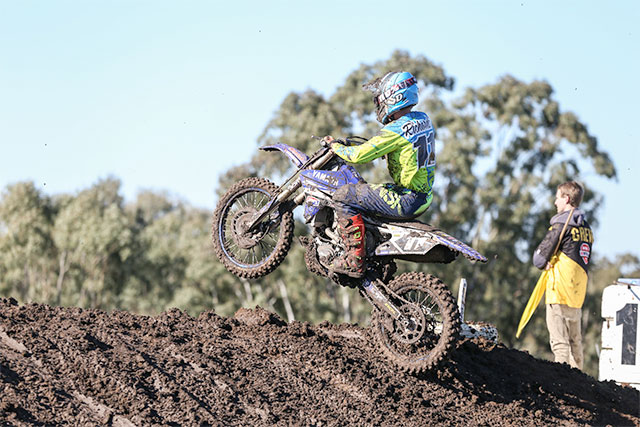 Jackson Richardson has moved to third in the MX2 championship. Credit: MXN Images
It was a day of what could have been for team mate, Jackson Richardson. Richardson was in great shape in moto one sitting comfortably in second place after six laps, within sight of the leader and miles ahead of the third placed rider when he went down in the deep bog in turn one.

From there it was next to impossible to lift his machine from the mud and he lost several laps trying to get his bike out of the mess. By the time the race was over, Richardson was in 11th place as the 16 out of the 29 riders in the MX2 class were unable to finish the race.

Things were also going well in moto two for Richardson who was sitting inside the top five in the early stages. Despite some near misses and plenty of ‰Û÷moments‰Ûª on the track, Richardson was able to consolidate his position and maintain it to the end where he finished in fifth place.

His 11-5 results gave him seventh for the round and moved him up to third in the championship.