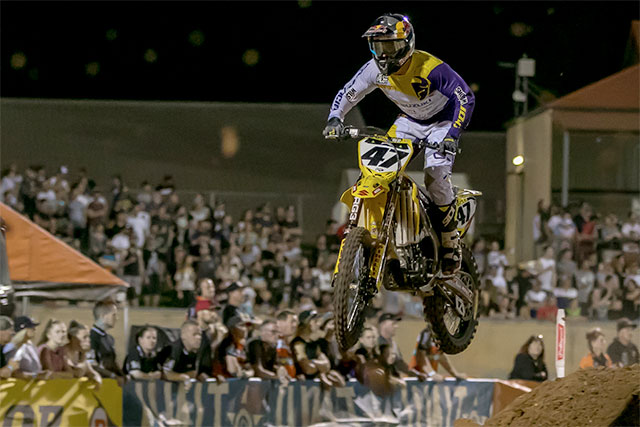 Wilson Coolair Motul Factory Suzuki riders Todd Waters and Luke Wilson have battled through a tough night of racing, at Round 3 of the 2016 Australian Supercross Championship at Wayville is South Australia last night.

With Wilson heading in to the round carrying a wrist injury, and Waters hoping to turn things around after a DNF at Toowoomba, the team pulled together from the minute bikes hit the track in Adelaide, but despite both riders showing impressive speed in their heat races, in the main event, things did not play out as they had originally hoped.

Waters, who qualified in 9th place, finished in an impressive 2nd position in his heat race, but unfortunately when the main event commenced later in the evening, another crash in the whoops section of the track marked an early end to the Queenslander‰Ûªs night ‰ÛÒ Water‰Ûªs registering a DNF.

‰ÛÏIt was a bit of a devastating night for me ‰ÛÒ we had good speed in the heat race, so to go down in the main event in the whoops again is really disappointing,‰Û 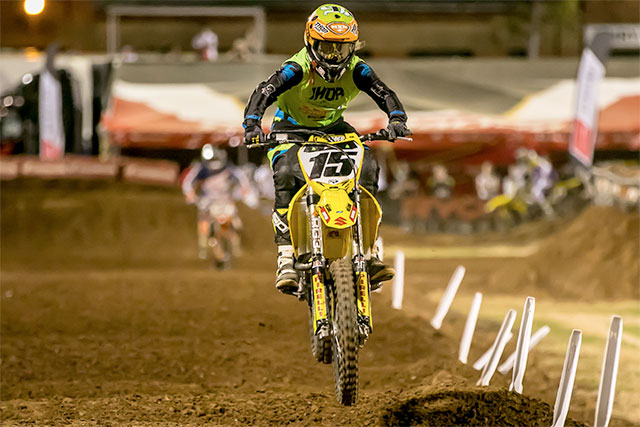 Luke Wilson. Credit: Arryn Minerds
For Luke Wilson, Round 3 was about getting through and finishing with as many championship points as possible. After qualifying in 13th position, Wilson raced to 7th in heat one, while in the 20 lap main, the Factory Suzuki rider collected the chequered flag in a hard fought 12th place despite limited bike time prior to the round, as well as carrying a wrist injury.

‰ÛÏFrom the beginning of this round, we knew it was just a night we needed to get through, and we did that ‰ÛÒ we got 12th in the main which was what we could manage given that I‰Ûªm carrying an injury,‰Û