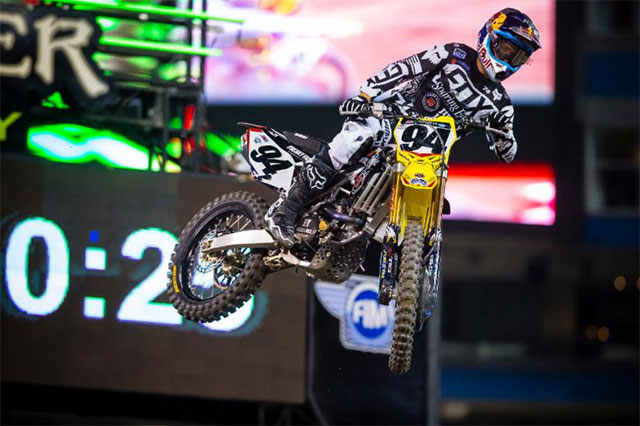 The top two riders in the championship will lead their field competitors into this weekend's annual visit to Detroit's Ford Field for the 11th race of the season, this Saturday, March 19. In the Eastern Regional 250SX Class, three different riders have stood atop the podium through the championship's first three races.

Monster Energy Supercross has raced in Detroit since 1976, racing for 29 years at the Pontiac Silverdome ('76-'05), before moving to Ford Field in 2006. This year will be the sixth race at Ford Field.

Detroit became one of the championship's beloved races when it introduced weekend doubleheaders in 1977, a tradition that carried on inside the Silverdome for 16 seasons from '77-'93. Two races were held in Detroit during the 2000 season, but not on consecutive days.

Another unique and iconic element of the Detroit Supercross featured track layouts that ran into the stands of the Silverdome. That tradition continues at Ford Field.

Detroit is affectionately known as "The Motor City" since it served as the heart of America's automotive industry. The Ford Motor Company, General Motors and Chrysler are all headquartered in Detroit.

The first 450SX Class race held in Detroit was on March 27, 1976. Marty Smith won on a Honda for his first career victory.

This will be the 52nd time the gate will drop for a 450SX Class race in Detroit. A total of 24 different riders have earned a 450SX Class win in that span.

As a result of the doubleheader races in Detroit, Bob Hannah's nine wins at the Silverdome is the most for any rider at any single venue in Monster Energy Supercross history.

Hannah also has the record for most consecutive wins at a venue, claiming six straight at the Silverdome by sweeping the doubleheaders from '77-'79. He shares this distinction with Jeremy McGrath, who won six consecutive years at the Minneapolis Metrodome in Minnesota from '94-'99.

James Stewart has won three of the five races held at Ford Field, including the debut in 2006.

Davi Millsaps and Eli Tomac are the only other riders to win at Ford Field. Millsaps earned his second career 450SX Class victory in Ford Field in 2008, as did Tomac in 2015.

Ricky Carmichael, Mike LaRocco, Nathan Ramsey, and Stewart have all won Detroit in both the 250SX and 450SX Classes. Justin Bogle, Ryan Dungey and Josh Grant each have the opportunity to join this group.

Suzuki had not won a 450SX Class race in Detroit since 1983 before Stewart took the checkered flag in 2014.

Neither Husqvarna nor KTM has ever won a 450SX Class race in Detroit.

Riders to Win in Both Classes in Detroit

The first 250SX Class race held in Detroit was on April 12, 1986. Ron Tichenor won on a Kawasaki for his first career victory.

This will be the 35th time the gate will drop for a 250SX Class race in Detroit.

There has never been a repeat 250SX Class winner at Ford Field, and that will continue with Bogle's move to the 450SX Class in 2016.

There has not been a repeat 250SX Class winner in Detroit since the 2000 season. A total of 10 races have been held in Detroit during that span.