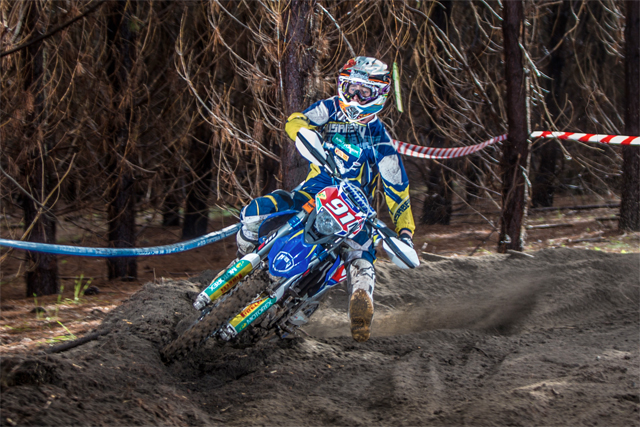 It may be one of the smallest of the ‰Û÷brand‰Ûª teams but if recent form is anything to go by, Husaberg Australia is punching above its weight.

With fourth and second outright finishes at the Finke and KTM Hattah desert races in the last 5 weeks in the sublime hands of Jarrod Bewley, and a personal best outright finish to FE350-mounted Scott Keegan in the last AORC round in South Australia, the ‰Û÷berg boys definitely have the flag on the rise.

While Bewley is not contracted to compete in this year‰Ûªs four-day, Keegan will contest the highly competitive E2 class on his familiar FE350, which he hopes will give him an advantage in the tighter conditions.

‰ÛÏWe‰Ûªve been here a few days now and it seems fairly well organised and the track looks pretty good with a fair bit of rain so it shouldn‰Ûªt be dusty." Keegan stated as the 2013 event was about to get underway. "Everything‰Ûªs gone well with the training and the FE350 is going awesome ‰ÛÒ I‰Ûªm looking forward to riding on these tracks.

"In fact from what I‰Ûªve seen I think the FE350 might be the perfect bike for job. Some enduro tests are tight and naturally rough where the FE350‰Ûªs nimble feeling and good amount of power should be good.

"For me the goal is as usual, go ride, tick all the boxes and hopefully ride at a good speed. We really want to be serious contenders and the Husaberg is more than capable of it. This is my fifth A4DE. I love the enduro format, it‰Ûªs my favourite sort of racing.

"Since I went to Europe everything seems a bit easier over here so I‰Ûªm not worried about losing time, and there‰Ûªs a lot of time on the bike which is great when you‰Ûªre bike‰Ûªs working good like mine is," he concluded.

Back in blue after a stint filling in for injured Toby Price in the KTM squad, AORC E3 championship leader Geoff Braico will return to the team and to his FE501 for the four-day.

‰ÛÏFeels pretty good to be back in blue, I am happy to be back." Braico enthused. "I‰Ûªve been riding the Husaberg since after the last AORC, just doing a little bit of mucking around get the bikes feeling as similar as possible.

"To me the four-day is the most prestigious race in Australia. This is my 8th or 9th one and to be representing NSW is pretty awesome so it would be great to get the class win for Husaberg, I‰Ûªd be pretty pumped about that.

Grabbo and Stefan will fight pretty hard but that‰Ûªs what we train for and I‰Ûªd really like to win it. Did lots of walking yesterday and it looks like Colin Jennings and his crew have done a fantastic job.

There‰Ûªs been some rain here and there which is good and you can see there‰Ûªs been a lot of effort gone into it. There‰Ûªs a sand, clay, gravel and topsoil surfaces to deal with so everyone will have to adapt to different terrain and I hope we can get both Husabergs on the podium.

"That would really give us a reason to celebrate at the end of event," Braico concluded.

The event takes place 90 minutes south of Perth from Wednesday until Saturday. More than 250 riders will vie for outright, class and state team honours over four days of racing from July 17-20.

Top Image: Scott Keegan (Pictured) and Geoff Braico will lead the charge for Husaberg at this years A4DE
Credit: FourohFour