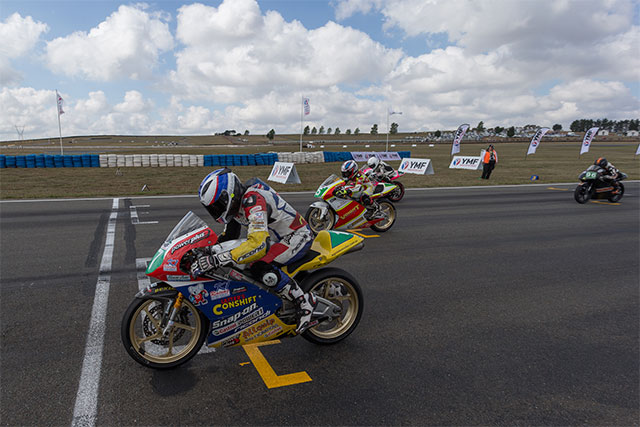 It‰Ûªs safe to say the future of road racing is very bright after seeing the talent in the Production and Honda Moto 3 / 125 GP classes at Round 2 of the Yamaha Motor Finance Australian Superbike Championship presented by Motul Pirelli, which was held Wakefield Park Raceway in Goulburn this weekend.

Grit and determination to win was showcased across all classes today, and both the Production and Moto 3 / 125 GP categories fought hard for the final podium positions in races two and three today.

With the Production class being the second race out on track this morning, the spectators began to flood into the venue, fans eager to spending their Easter weekend in the perfect location ‰ÛÒ Wakefield Park Raceway.

When bikes left the grid, it was DB Racing‰Ûªs Reid Battye on his Kawasaki machine who got to the early race lead, ahead of Yamaha mounted Brandon Demmery in second, while Samuel Condon (Kawasaki) held down third position, after only one lap in the books.

After two laps Battye came under all sorts of pressure from Demmery and Condon, the trio close to neck and neck as bikes approached turn four. But in spectacular fashion it was Demmery who snatched away the race lead from Battye, while Condon continued to apply the pressure in third.

With the top three riders pulling a gap on the field, the focus shifted to the battle for fourth ‰ÛÒ Yamaha mounted Callum Alderson, Drew Sells (Kawasaki), Ty Lynch, and Zachary Johnson all scrapping away for remaining positions.

After four laps, Battye snatched back the race lead from Demmery, however his time in the top spot was short lived, Battye drifting in to the kitty litter at turn ten, handing the lead back to Demmery.

At the half way point in the ten lap race, the running order saw Demmery only just maintaining the race lead from Condon and Alderson - Sells held down fourth ahead of Lynch and Johnson who were in in fifth and sixth.

When the last lap board was shown, fans were treated to a last ditch effort from Condon, who made a pass on Demmery for the lead which he made stick for the remaining lap.

When the chequered flag flew Condon took a hard fought win away from Demmery in second, followed by Alderson who took out third position.

With only a few laps in the books, Demmery got to the early race lead ahead of Condon, and Battye, followed by Sells, Alderson and Zach Johnson who were all locked in a tight battle for the remaining positions.

On lap four, and with Demmery still out in front, the focus shifted to the unfolding fight for second position ‰ÛÒ Battye making the move on Kawasaki mounted Condon and moving in to second, only for Condon to snatch the back the position, then setting his sights on the rear wheel of Demmery.

However, when the chequered flag flew, it was Demmery who got the job done, ahead of Battye who managed to grab back a position from Condon to conclude the race in second, whilst race one winner Condon was forced to settle for third.

When the points were tallied the up to 300cc Production round winner was Battye, from Condon in second, while Sells secured third spot on podium.

The Over 300cc Production round two win went to Yamaha‰Ûªs Demmery, while Alderson finished in second, ahead of Aidan Hayes who wrapped up an action packed round two of the ASBK at Wakefield Park in third.

When the Honda Moto3 / 125 GP class got their first race for the day underway, 14-year-old Locky Taylor got to the early race lead, however it took no time for Brian Houghton to show his race craft experience, snatching away the lead from the youngster after only a few turns.

With six laps in the books, the running order saw Houghton in front, followed by Taylor who managed to keep a hard charging Tayla Relph at bay, while Ben Leonard and Dylan Whiteside held down fourth and fifth.

When the chequered flag flew Houghton‰Ûªs lead was one which he did not relinquish, the most experienced rider on the track leading for the entire 12 laps, from Taylor who managed to only just fight off Relph for second position, Relph crossing the line in third, while Ben Leonard and Dylan Whiteside completed the top five for race two in the Moto 3 / 125 GP class.

When the second race for the Honda Moto 3 / 125 GP class got underway, Taylor once again showcased his outstanding starting ability, storming in to the race lead, keeping Houghton and Relph at bay.

But it wasn‰Ûªt long before Houghton made his presence known, snatching the lead away from his 14-year-old rival after only a few turns.

Despite Taylor closing the gap on Houghton as the race reached its final stages, the race order remained unchanged, Houghton taking the race three win, ahead of Taylor in second, while the lady of the moment was Relph who backed up her performance this morning to conclude the final race in third.

Ben Leonard and Dylan Whiteside also wrapped up the final race of the day in fourth and fifth positions.

When the round points were tallied, Houghton‰Ûªs flawless performance and years of experience saw him take the round two win, ahead of Relph who concluded the round in second, while Leonard was awarded third position on the podium, Taylor missing out on a spot on the box as a result of his DNF in race one on Saturday.