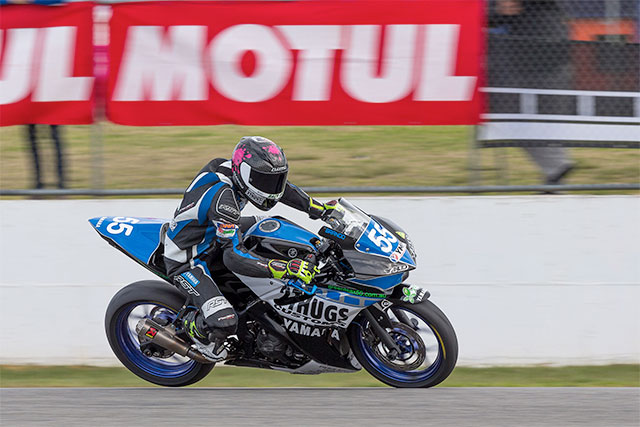 Barbagallo Raceway roared to life today, with competitors across four classes hitting the track for the first race of the weekend, at Round 4 of the Yamaha Motor Finance Australian Superbike Championship presented by Motul Pirelli in Western Australia.

There was plenty of action on track from the Production, Honda Moto3/125 GP, Club Challenge C&D Grade, and Sidecar classes today with riders getting down to business for the first lot of races at Barbagallo Raceway.

After a successful practice at Barbagallo yesterday, the Over 300cc and Up to 300cc Production classes were forced to contend with patchy track conditions throughout qualifying this morning, but after two sessions it was YRD‰Ûªs Callum Alderson who secured Pole position with an impressive 1:06.526 lap time, from Race Centre‰Ûªs Drew Sells (1:07.279), while Brandon Demmery‰Ûªs 1:07.402 saw him qualify in third. Sam Condon, Tom Toparis and Reid Battye all recorded times inside the top ten this morning.

When Production riders took to the grid this afternoon for their first race of the weekend, all eyes were on pole position holder Alderson who had showcased his lightening fast speed on track. And when the 31 bikes screamed in to the first turn, it was the Alderson‰Ûªs YRD Yamaha who led the way.

After three laps of the ten lap journey, Alderson continued to maintain his lead however it wasn‰Ûªt without pressure ‰ÛÒ the likes of Demmery and Battye hot on his tail, making for exciting racing for spectators at the Barbagallo circuit.

By the halfway mark in race one, Alderson was continuing to feel the daring speed of Demmery on his rear tyre, and it was approaching the start straight going in to lap six that Alderson succumbed to Demmery‰Ûªs pressure, putting his Yamaha down, unable to re-join the race.

From there, Demmery inherited the lead with Battye, Sells and Toparis in tow. However, it was an early end to the day for DB Racing‰Ûªs Battye too, who went down in the basin in the closing stages of the race, also unable to re-join his competitors.

And when race one concluded, it was Demmery who collected the first victory in Over 300cc Production category, from Sells who took second place and the victory in the Up to 300cc category. Kawasaki mounted Toparis wrapped up race one in an impressive third place, while Sam Condon, and Justin Hall completed the top five finishing positions. Paul Young, Aidan Hayes and Jake Hancock all finished inside the top ten in Production race one.

In the first qualifying session for the Honda Moto 3/125 GP competitors, track conditions remained damp after rain fell during the night, but with the breeze drying the circuit out, riders took a guess with tyre choice and did their best to put down their fastest times.

Despite a minor crash in Qualifying 2, when times were combined Houghton once again snatched up pole with a 1:02.622, while Leonard was consistent again qualifying second (1:03.147). David Doughty, plus regulars Locky Taylor and Taylor Relph all qualified within the top five after two sessions on track.

When racing kicked off late this afternoon for the Honda Moto3/125GP class, Houghton was a notable absentee from the grid, forced to sit out of race one due to bike issues - so when bikes launched down the straight, it was second fastest qualifier Leonard, who shot off in to the race lead, while despite lacking some pace this morning, youngster Locky Taylor slotted in to second position behind him.

From there, Leonard was in no way backing off, and by lap five had stretched out his lead on Taylor, while Relph and Doughty followed closely behind in third and fourth positions.

The excitement then came from the battle for second, with Taylor and Relph going toe to toe, keeping the crowd guessing as to who had the determination to hold off the other. But it was Relph who managed to make the pass on Taylor in closing stages of the race, snatching up second place and pushing 14-year-old Taylor back to third position.

So when riders received the last lap board in race one, Leonard was well and truly in the box seat to take the race one victory, and when the chequered flag flew it was Leonard who took the first Moto 3/125 GP win for the weekend, while Relph wrapped up race one in second, followed by Taylor who finished third.

Scott Pettit was the fourth rider to cross the line, and was the first 125 competitor, followed by Doughty (125) who completed the top five positions in race one.

After a brief practice this morning, both the Club Challenge C&D grade riders hit the track for their first and only qualifying session this afternoon, and it was BPR Racing‰Ûªs Scott McCue who was fastest and the only rider to qualify with a sub minute lap time (59.693). Max James-Beatsonbell snatched up second position on the grid with a 1:00.019 time, while third fastest was Ash Jennings (1:00.538).

When race one kicked off for the Club Challenge C&D class competitors, an impressive 31 riders took to the grid for the first race of the day, and it was Suzuki GSXR 1000 rider Ash Jennings who launched in to the early race lead, fighting off the likes of McCue and BPR Racing‰Ûªs Anton Jones who were both going head to head around the fast braking circuit.

After only two laps, Jennings and McCue broke away from the stacked group, but it was a disappointing early finish for Jennings who crashed at turn six ‰ÛÒ unable to re-join the race.

From there McCue was able to collect an unchallenged victory from James-Beatsonbell and Jones in the 1000cc category, while Eddie Kirrane secured the 600cc victory from Velocity Race Team‰Ûªs Nick Favazzo and Pascal De Roche.

Sidecars had their first chance to hit the track for qualifying in Western Australia ahead of race one today, and it was duo Murray Stronach and Steve Marshall who would start on Pole at Barbagallo with a 1:04.387 qualifying time, while Jero Joyce and Corey Blackman were second quickest 1:04.66, from Graeme Evans and Jarred Scott (1:05.522).

In the first Sidecar race this afternoon, Suzuki‰Ûªs Stronach and Marshall were simply unstoppable, and after six laps took an unchallenged victory from Joyce and and Blackman who crossed the line in second. Evans and Scott wrapped up race one for the Sidecar Challenge in third place, followed by duo Gary Cushnahan and Paul Matthews who steered their Watson Honda machine to fourth place.

With race one for selected ASBK competitors done and dusted, competitors and teams will now prepare for more racing at Round 4 of the 2016 Yamaha Motor Finance Australian Superbike Championship presented by Motul Pirelli at Barbagallo Raceway on Sunday.