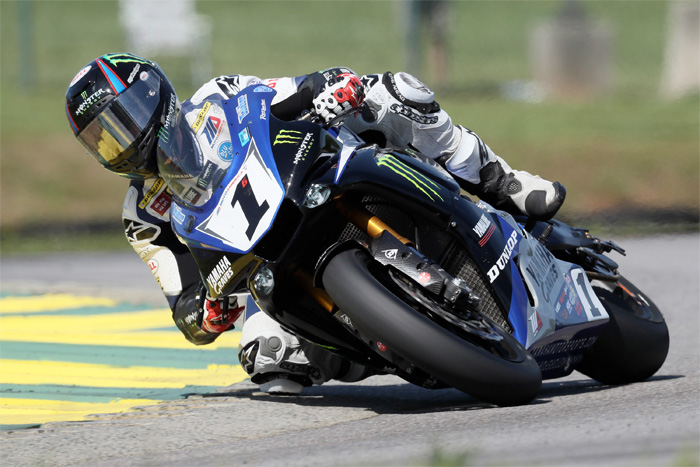 Monster Energy/Graves Motorsports Yamaha's Cameron Beaubier earned his third Superbike pole position of the season and the eighth of his career today during qualifying for Sunday's two races in the Yamaha Superbike Challenge of Virginia at VIRginia International Raceway.

Beaubier lapped at a best of 1:24.358 on his Yamaha R1 to best Yoshimura Suzuki's Roger Hayden by a scant .187 of a second with Hayden's teammate Toni Elias finding his form again to put his GSX-R1000 on the front row.

"I made a couple changes going into qualifying," Beaubier said after his third pole in a row. "I felt really good at the beginning of qualifying on the soft-race tire. I felt like I did a couple of decent laps and I got ready for the Superpole (Qualifying) tire. The Superpole tire was pretty crazy around here; just cause the track already had so much grip. It was nuts, it was pushing the front everywhere. So it was hard to adapt for just one lap on the Superpole tire, but it's the same situation for everyone."

Beaubier's time was a tick over half a second quicker than Josh Hayes' pole-position time from a year ago at VIR.

"I'm pretty happy," said second-fastest qualifier Hayden. "I haven't always been too strong here. But this week I have a great feeling with the bike. This morning I did a lot of laps in the 25s, so I feel good for tomorrow. Qualifying wasn't the greatest, because it's kind of difficult to get a rhythm, and there's a lot of guys out there trying to get a tow. It makes things challenging, but I'm happy with the front row. A good start here's important - it's a tough place to pass."

Elias, meanwhile, has struggled with front-end feel since he turned his first laps in what is his VIR debut. He has more work to do in Sunday's warm-up session to try to find a setup that will allow him to race for 25 laps.

"I really like the track, but it's the kind of track that if you don't have a great front feeling you are dead," Elias said. "This is my problem now. I hope tomorrow will be better and at least I can enjoy it a little bit more."

The second row of the grid will be led by Josh Herrin on the Superstock-spec Wheels In Motion/Meen Motorsports Yamaha R1, the Georgian .380 of a second behind Beaubier and just .050 of a second ahead of the Yamaha Superbike of Broaster Chicken/Roadrace Factory's Jake Gagne. Italian Claudio Corti, the winner of the last two Bazzaz Superstock 1000 races, will fill row two on the Superstock-spec HSBK Aprilia.

The biggest surprise of Superpole came from the performance of Hayes, the four-time Superbike Champion forced off track by Herrin and Corti as they were on their cool-down lap while he was on his hot lap with his qualifying tire. After riding off into the grass, Hayes rejoined the track but his lap and qualifying session were effectively ruined. He will start both races from the fourth row of the grid after qualifying an uncharacteristic 10th.

Following a storm that featured canopy destroying winds and a deluge of rain, the Supersport race went to the grid with tire decisions to be made that would ultimately determine the finishing order. Championship points leader Garrett Gerloff and his Y.E.S. Graves Yamaha crew made the right choice: slicks on both ends of his R6. His teammate JD Beach, however, gambled that the track would stay wet enough to make his rain tires last. It did not and the drying track destroyed his tires and allowed the field to catch up after he'd blitzed away at the front and opened a lead of up to 12 seconds. Beach would struggle to bring his rain-tire shod Yamaha home in 14th place, earning him just two championship points.

The first person to reel in Beach at the front was Wheels In Motion/Meen Motorsports Yamaha's Joe Roberts. Roberts had chosen a combination of rain front tire with a slick rear tire. That combination worked good enough to finish on the podium but not good enough to hold off the advances of both Gerloff and New Jersey Motorsports Park race-two winner Cameron Petersen, the M4 Sportbike TrackGear.com Suzuki rider, like Gerloff, going with full slicks on his GSX-R600.

Californian Michael Gilbert won his second career Superstock 600 race, the Michael Gilbert Racing rider working his way all the way to fourth overall and ahead of fifth placed Benny Solis Jr. on the Team H35 Honda CBR600RR. Travis Wyman and Bryce Prince were second and third, respectively, in the Superstock class and sixth and seventh overall.

Deion Campbell, Valentin Debise and Nick McFadden, in his first race of the season after suffering an off-season injury, rounded out the top 10 overall.

Gerloff now holds a healthy 25-point lead over Beach in the championship, 120-95. Debise is now just a single point behind Beach in third with 94 points with Petersen (79) and Roberts (69) rounding out the top five.

"I think it's a little bit of both," Gerloff said when asked if his rivals' tire choices played a part in his decision of if the choice was his and his alone. "Luckily this is one of the tracks I've raced at a lot as an amateur as this is my home area in the southeast. I've been here in conditions just like this and I knew what was going to happen as long as the rain stayed away. It was a last-minute decision because I wasn't 100 percent confident but I put in slicks for the race.

"The first two laps were pretty wet and I had a little bit of movement and got me nervous. I backed off the first couple of laps and found a dry line and was just trying to work it. JD shot off in the beginning and Joe was right there behind them. I was hoping what I thought would happen did, which was the rain tires dropping off. I just tried to push because I knew I wasn't the only one with slicks on."

New Jersey's Anthony Mazziotto III won his second KTM RC Cup race of the season after pulling away from his pursuers on the final lap to win by .521 of a second in a race that was held under brilliant sunshine and warm temperatures. The win also moved into a tie for the lead in the championship with rival Brandon Paasch, who was fourth today after being caught out by not knowing the last lap was the last lap. The pair has two wins apiece and 103 points each.

Second place in Saturday's KTM RC Cup race went to to Yates Racing's Ashton Yates, the Georgian earning his second podium finish of the season and his best finish to date. He was .521 of a second behind Mazziotto and .694 of a second ahead of Alejandro Gutierrez, who earned his first career MotoAmerica podium finish in third. Paasch and Jody Barry rounded out the top five finishers.

"I was just trying to put in a really good flier because I knew from in qualifying that I did that lap all by myself." Mazziotto said of his last lap. "I thought if I put my head down I could maybe make a little bit of a break. I made a big enough one to get to the finish line first."