Defending champ Jones talks ASBK ahead of round four this weekend

As the days until round four are marked off the calendar, this week has proven vital for young DesmoSport Ducati Rider Mike Jones, who will take to the grid for the fourth round of the 2016 Yamaha Motor Finance Australian Superbike Championship presented by Motul Pirelli this weekend, June 3-5 at Barbagallo Raceway.

Although a champion in his own right, the start of the year has proved challenging for young Jones. With a new team and a new bike, Jones has had to adjust to the power of the DesmoSport Ducati 1299 Panegale S this year after transitioning from his Kawasaki last year.

But despite some challenges, Jones has risin to the occasion in fine form tuning in his Ducati, locking down podium finishes in a bid to defend his 2015 title. Jones has today shared that he is feeling confident for round four of the ASBK after testing earlier this week at Barbagallo Raceway.

‰ÛÏIt was awesome to get back on the track on Saturday after testing, Barbagallo is a circuit I really like,‰Û 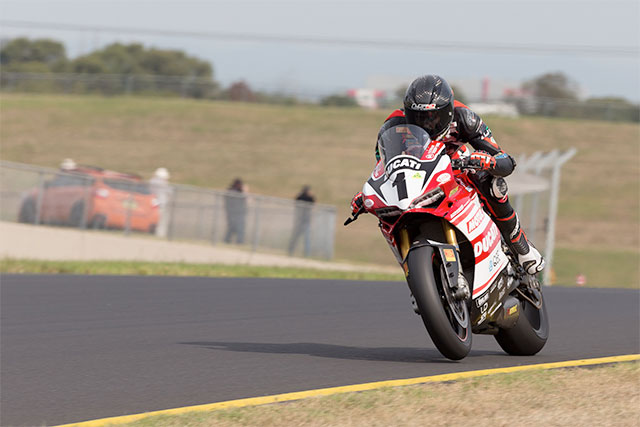 Mike Jones in action: Credit - Andrew Gosling/tbgsport
With the DesmoSport Ducati Team and Jones working hard together, their focus is well and truly on this weekend, and also shared that the Thursday practice will prove vital for bike set up ahead of this weekend‰Ûªs racing.

‰ÛÏOur DesmoSport Ducati team are working really well together. The main thing that we work on, on the bike are the suspension and geometry set up. We are always tweaking and tuning the Ohlins suspension and making lots of little improvements to the bike,‰Û