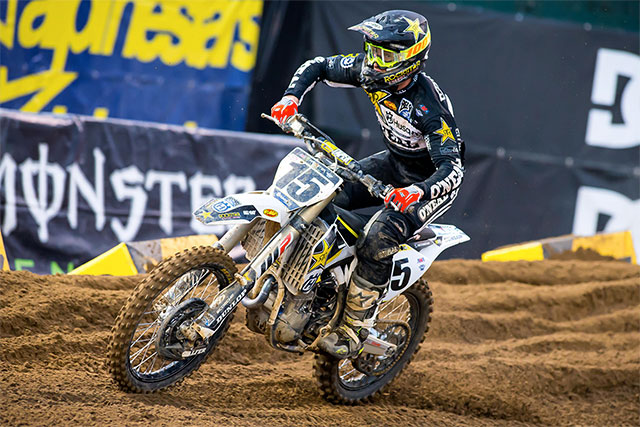 The Rockstar Energy Husqvarna Factory Racing team saw a new face under the tent as Dean Wilson joined the ranks for the remainder of the 2017 season, starting this weekend at the Oakland Monster Energy Supercross, the fifth round of the series, held at O.Co Coliseum.

After only two days on the bike it was always going to be a steep learning curve, especially with the tough conditions Oakland threw up.

Wilson went down in the sand early in his heat, but immediately started putting in work to make his way through the field. He was 10th by the third lap, continued to advance, and finished eighth. The result meaning a trip to the Semi.

The Brit then got in qualifying position early after the start of his semi and held his ground. He made an impressive corner pass for third in the third lap, but made a mistake in the first rhythm section and finished out of qualifying position, forcing him to go to the LCQ. He pulled the holeshot in his LCQ and held strong for the win and a spot in the 450 main. He started mid-pack in the main, pushed his way to ninth by the third lap, and stayed consistent the majority of the race before finishing 10th. He leaves Oakland 10th in 450 rider point standings.