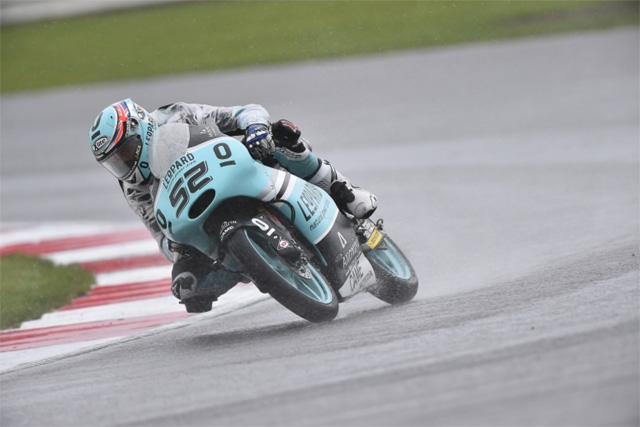 Moto3, the last and wettest race of the day at the British MotoGP held at Silverstone brought a sixth win and an extended championship lead to the best of Honda‰Ûªs dozen contenders, Danny Kent (Leopard Racing Honda NSF250RW).

Honda took five of the top six positions in a crash-strewn race, with only 20 finishers of 36 starters. The interloper up front was second-placed Jakub Kornfeil (KTM) who finished narrowly ahead of Brno winner Niccolo Antonelli (Ongetta-Rivacold Honda NSF250RW), who had come storming through from 17th on lap one.

‰ÛÏThe conditions were difficult all race but towards the end it got worse, so you had to be very careful." Kent reflected. "There was definitely no time to take it easy.

"I tried to stay calm as Isaac [Vinales] pulled away, and after I took the lead I had to remain focused all the way down to the line. I was sliding a lot, but I managed to stay on the bike. It‰Ûªs an amazing feeling to win your home round in front of this cheering crowd out there but also my whole family is here and so many friends came to see me winning.

"The atmosphere is amazing too and it‰Ûªs the same dream for every rider if you would like to win at any track of the calendar, of course it‰Ûªs your home Grand Prix which I‰Ûªve achieved today.

"The championship is still open. We won 25 points today but on the other side we lost 21 points during the last two races. So you can win points as fast you can lose them. We need to keep working hard until the very last race of the series.‰Û