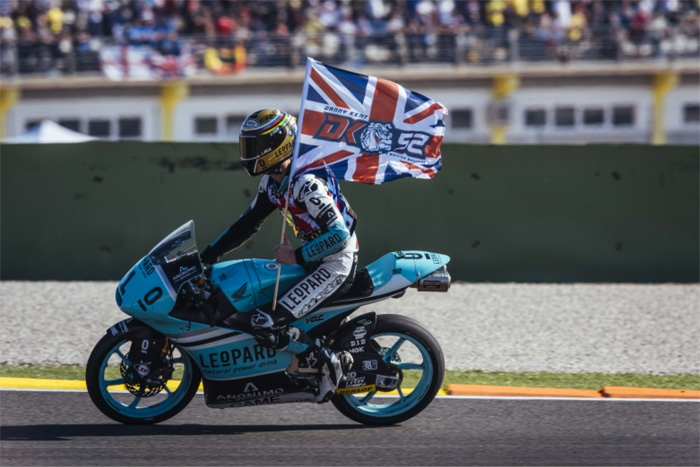 Miguel Oliveira (KTM) won the race, meaning that Kent only had to finish in the top 14 to claim Britain‰Ûªs first Grand Prix world title since Barry Sheene won the 500cc title in 1977.

This was Honda‰Ûªs 15th riders‰Ûª title in GP racing‰Ûªs junior category: four in the 1960s four-stroke era, nine in the two-stroke era and now another two in the modern four-stroke era.

Kent won six of the first 12 races to establish a mammoth points lead but he has struggled since then and two crashes ‰ÛÒ at Aragon and Phillip Island ‰ÛÒ let him with a 24-point advantage going into this last race. Finally it all worked out for the 22-year-old.

‰ÛÏIt‰Ûªs definitely the best day of my life today, it feels so good to clinch the title which took four races finally." Kent enthused. "So there were some nail-biting times behind me.

"But now I leave the Moto3 category as World Champion, which is such a great thing. To win the championship in the very last race is very emotional. A huge thanks to everyone involved in this great success.‰Û