Danny Ham Ready To Return To The Track For 2015 ASX 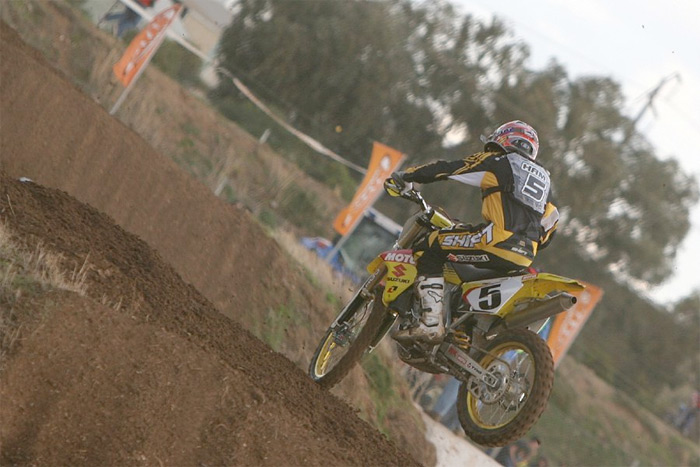 One of Australia's most popular dirt bike racers is quietly but confidently working on a return to the race track that will see him take his place on the grid when the gate drops on the 2015 Australian Supercross Championship at Bathurst, NSW, on Saturday, October 10.

Danny Ham is a rider who needs no introduction to Australian moto fans.

For more than a decade (1995 to 2005) Ham raced at the highest levels of the sport for the country's leading factory-backed Suzuki and Yamaha race teams, and along the way helped pioneer freestyle motocross with his flamboyant riding style and hand-picked appearance in an early Crusty Demons of Dirt video.

Now, at age 37, 'Hammy' is venturing back on to a supercross track and has lodged his entry for the fast-approaching Supercross championship kick-off at Bathurst on the weekend of the Supercheap Auto Bathurst 1000 V8 Supercars race at Mount Panorama.

And while this story appears to have the hallmarks of a 'comeback', Ham explains otherwise:

"You know, I never really called it a day with racing," says Ham, "because like a lot of riders, I just drifted away from racing. I never thought I wouldn't ever race again, I just didn't know when I would race again.

"Now's the time, and I'm doing this because I love and miss racing supercross."

Remarkably, Ham has not raced supercross since 2007, after moving into race commentary and track building activities in 2008, and then taking a race team management position in 2011 with the now defunct JDR Motorsports KTM outfit.

But for the best part of the four years since then, Ham capitalised on his machine operator skills and worked F-I-F-O in the mines in Western Australia, commuting monthly across the continent from his home near Newcastle in the NSW Hunter Valley, each time leaving behind his longtime partner Shelley and now four-year-old daughter Taylah Jayne.

"That was a punishing schedule: four weeks on in the mines, then home for six days, then back to the mines and do it all again," explained. "After four years of it, I'm glad that part of my life is over."

And now the next chapter begins.

When it comes to work, Ham is still at the controls of heavy machinery, but now at home in the Hunter Valley, while for fun he's still behind the bars of a dirt bike.

Back in June Hammy accepted an invite to race the Australian Supermoto Championship held not far from home on the Newcastle foreshore and, showing the skill, speed and bike finesse that were the trademarks of his pro racing career, took home a Veterans class national championship win.

Now he's stepping up to the Supercross plate, a discipline that has always been his favourite.

"Supercross has always been my strong point in racing, more so than motocross," Ham reveals. "I love Supercross, it's fun, and what I'm doing now is all about having fun, serious fun.

"But it's also about doing it properly, which means training at 4.30 in the morning before work and then riding after work ‰ÛÒ lots of riding."

Ham has sourced a race bike with the support of a good mate and at this point in time is putting in a grass-roots 'unsponsored' effort that is sure to once again make him an absolute hero with the fans.

"This is not a pro level attempt," Ham emphasises. "I would be kidding myself if I thought that's how this was going to play out.

"So long as I have fun on race day, and if I get a tenth, or a fifth, or whatever, so long as I know I rode to my full potential, I will be happy with that.

"Like I said, this is all about having serious fun."

Given Hammy's popularity and the impact he made on the minds and dreams of so many young supercross, motocross and freestyle MX riders of an entire generation, you can rest assured the cheers will be loud each time Danny Ham rolls onto the race track in the 2015 Australian Supercross Championship.