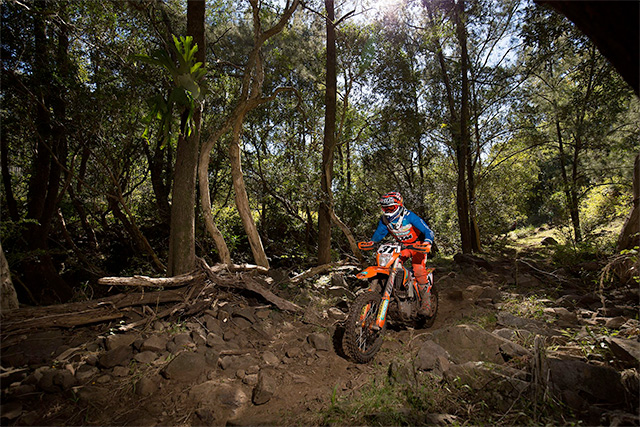 It was a case of new state, new surface, new format - same result, for the KTM Enduro Racing Team‰Ûªs Daniel Milner, who was unstoppable as the Australian Off-Road Championship reached its penultimate stop at Kyogle in Northern New South Wales.

In what was the first enduro-format round of the year, Milner blasted his KTM 450 EXC-F to two clear class and overall victories to continue extending his lead in both the E2 category and the unofficial ‰ÛÒ though highly scrutinised - outright classification.

Milner, Green and Riley Graham formed the E2 podium on both days.

‰ÛÏIt was a good weekend for us, the bike was unreal in these conditions," Milner said, "Saturday we didn‰Ûªt get times so I never knew how I was going so I just had to push all day. Saturday was also a fairly long day and there was some fatigue, so today I backed it down a little bit to not take as many risks. It worked out well.

"I enjoyed the enduro format too. We haven‰Ûªt done one all year and it was good just trail riding with the boys again. I haven‰Ûªt got to do that for a long time. I had Greeny and Stanford on my minute today and it was really fun to ride with those guys ‰ÛÒ we always give each other a bit of crap so it makes it good fun.

"I think I‰Ûªm more than 40 points up now so I‰Ûªve just got to finish well in the next round and I‰Ûªll have a championship. But it‰Ûªs never over ‰Û÷til the fat lady sings so I‰Ûªll go home and keep doing my work and see what happens.‰Û 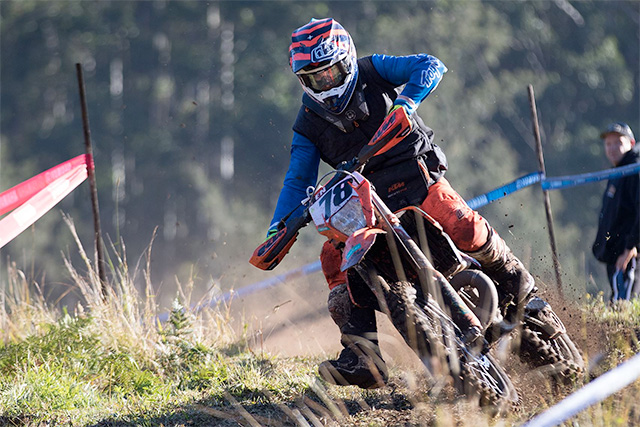 Lyndon Snodgrass took a fith and a mechanical DNF over the two days. Credit: John Pearson
On the KTM Enduro Racing Team‰Ûªs KTM 300 EXC, Lyndon Snodgrass found himself just shy of the pace in some of the more technical and off-camber elements of the track, and suffered in the time sheets early on, carding ninth in the very first test.

The Victorian teenager accepted the challenge, however, and worked his way up the results to be fifth overall and second in the E3 class to Stanford on Saturday.

Sadly, he boiled his rear brake in the first test today and had to build it all over again, finally finishing up sixth overall and second in class.

Snodgrass will enter the final AORC double-header in a fortnight, placed second in the season-long duel he has maintained for big-bore class supremacy with Lachlan Stanford, and will need to gain the ascendancy to pull off an incredible class win in his first year on the factory team.

‰ÛÏI started off in the first test boiling my rear brake and losing it for the last quarter of that test, so that put me back off the bat. From then on I was trying to catch back up. It was tough, but I had made improvements towards the end and that was giving me time back," Snodgrass said.

"It was definitely more technical than what we‰Ûªve been racing on, but it was good riding up here. Nice fun trail and flowy tests.

"The bike ran awesome all weekend. Lachy‰Ûªs got a few points on me in this one, so we can only charge as hard as we can in Victoria and try and get it back. I‰Ûªve never been up there but it‰Ûªs meant to be pretty good, I can‰Ûªt wait to get into it.‰Û