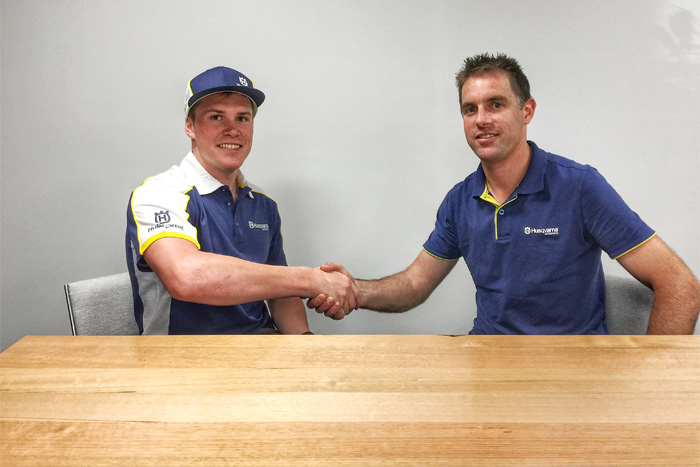 Husqvarna Australia have announced that Daniel 'Chucky' Sanders will join their Factory Off-Road Racing Team in Australia for the 2018 Season.

The 23-year-old from Three Bridges, east of Melbourne, shot to international stardom after winning the E3 category of the annual International Six-Day Enduro in 2015, and finishing fourth outright, before returning a year later to win E3 a second straight time and claiming second outright for 2016.

Sanders spent 2017 competing in the World E2 Championships for the KTM Factory Team, but has now returned home to attempt to reclaim the Australian Off- Road Championship he dominated in 2016.

Adding substantial firepower to the already successful Husqvarna team managed by former motocross pro Christian Horwood, Sanders has been contracted to take on the AORC, A4DE, Hattah as well as selected other events.

The exquisite Husqvarna enduro motorcycle range spoils any rider for choice, and the team is yet to confirm which machine Sanders will ride, pending off-season testing.

‰ÛÏIt‰Ûªs a big change for me, after eight years on KTMs. I‰Ûªm looking forward to it with some renewed motivation." Sanders enthused. "I‰Ûªm going to be riding a White Knight, but I don‰Ûªt know which one yet. I‰Ûªm having some fun at the moment on an FE 450; visiting some motocross and enduro tracks and getting a feel for it.

"Stock standard they‰Ûªre a magnificent bike and real reliable and enjoyable to ride. Every bike requires a different riding style and you learn something different off each one. I‰Ûªve had a bit of time on the 500s in the desert races, and now I‰Ûªm just waiting for the new TPI bikes to roll into the country to test out too."