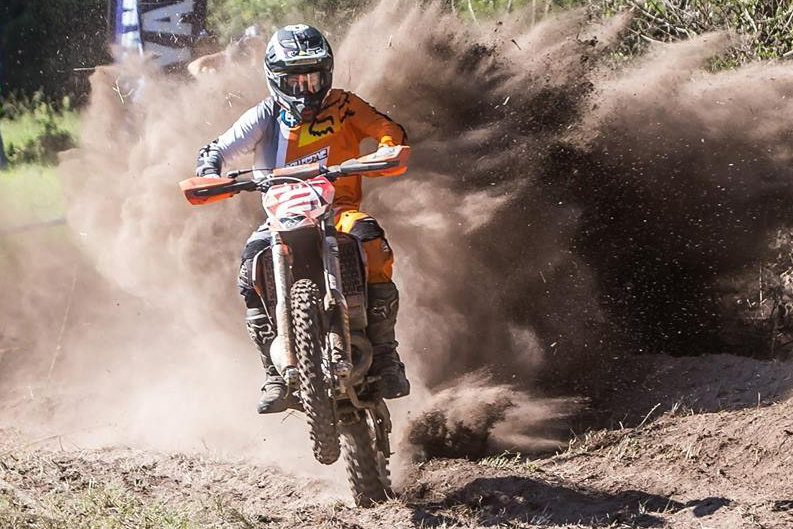 BOLTONS KTM/DIRTWISE/FOX rider Daniel Sanders was in great form at the opening rounds held at Bulahdelah, NSW over the weekend racing to his class win on both days.

Sanders on his KTM 300 XC had a grand performance in the newly added Enduro junior class (19 & under). The 19 year old Victorian took the win on Saturday, and also scored an impressive 6th outright out of all competitors on the super sprint track which took the top guys approximately 19 minutes to complete on some gnarly, rocky, and dusty terrain.

"I was stoked with my results, my off season somehow paid off!" Sanders exclaimed. "I didn't get to do as much training as I wanted to do due to some injuries, plus working full time at my family's apple orchard to pay for racing, so it makes it so much better when I can put down some results like that!"

Day two had the riders charging of off in fog with Sanders ripping through the shortened sprint track and finishing in 4th outright for the first heat of the day, but then drop back further in the following heats due to some small crashes.

Sanders finished 9th outright on Day 2, and he dominated the Enduro Junior class with another commanding victory.

"I couldn't really ask for a better start to the season." Sanders continued. "I was sitting in a good outright position on Day 2 coming into the last sprint and I went down hard twice on the dusty rugged course.

"I was not all that familiar with the terrain and the layout over the weekend but I adapted well and had some great results", he concluded.

Sanders left round one with a strong 10 point lead in the Enduro Junior class championship heading into the Rounds 3 & 4 to be held in Queensland in 4 weeks time.

Top Image: Daniel Sanders on his way to dominating the opening rounds of the all new Under 19s Enduro Class
Credit: Fourohfour