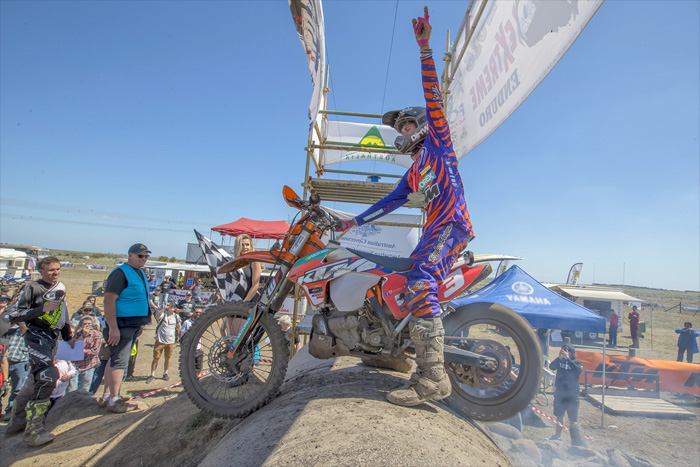 Completing an exciting 2015 that has included winning the E3 championship at the ISDE in Slovakia, 21-year-old Sanders took the lead on the first lap, relinquished it in the second to English visitor Ben Hemingway, then took over for good on the third, powering away to a near five-minute win over Phillips, with another former winner, Mitch Harper, third.

‰ÛÏIt's the hardest race in Australia, a good challenge, and somehow I had fun out there, just because of the challenge aspect." Sanders admitted. "It's not really a race, you just soldier on through it.

"There were some big names there so it was good to beat them, and see that my fitness was right up there. I‰Ûªll keep working on it over the off-season, it helped me to know where my weaknesses are and it will help the next year I reckon.

"I was winning it from the start, then Ben Hemingway led from the second lap, and then I passed him just before the third, so it is good to lead from there. I just had to concentrate so hard, and then the sun ended up coming out and started cooking my brain. A tough race.

"The bike was unreal, straight off the four-day Mick and Grabbo had to build it up, with all the protection, radiator braces and pipe guards disk protectors. And boy did I test the crash protection today, it went through hell today, she was upside down at times, everyone had some carnage at some point, and on the nasty hill you could be off the bike five times in 50 metres!‰Û 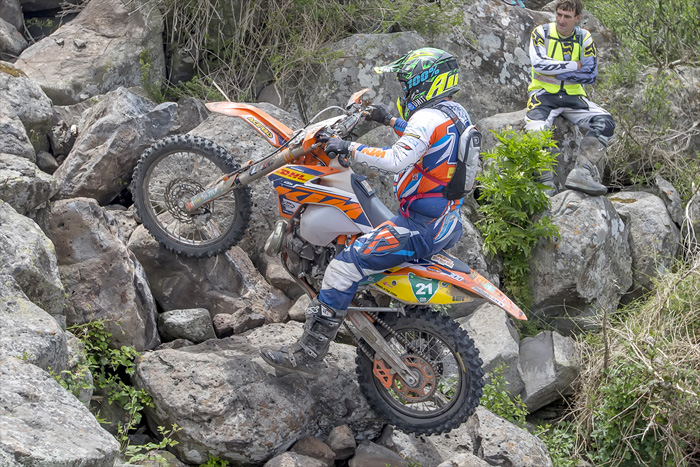 Matthew Phillips made a last second decision to race this years event and finished second
Phillips‰Ûª race was equally exciting in its own unique way, the Tasmanian making an eleventh hour decision to compete in the race despite being a month into his off-season, and having done little other than some plumbing around the house in recent days.

The spontaneity and lack of hard enduro preparation did little to hold back internationally experienced former Wildwood winner however, and Phillips and used his KTM 300 EXC to post the second fastest time in this morning's Prologue before backing up with the runner-up position in the main event.

‰ÛÏWe were having a bit of a relax in the shed on Friday night and decided at the last minute to come over and give it a crack." Phillips explained.

"There's been no training build up - I've been at home doing plumbing so I've been pretty busy, but Dad was keen to go and it was a good chance to go to a race with him and the crew, so got off the boat this morning and went out to the track and got straight into it.

"I started off a little bit tight and lethargic, but I started getting the hang of it and had a good day. Chucky was just strong all day, he led from start to finish and looked really good so I‰Ûªm really happy seeing him win.

"My run was all right, I had a bit of trouble in the rock garden but my bike ran very well and I had a good crew with me today with family and friends so it was a good fun day.‰Û 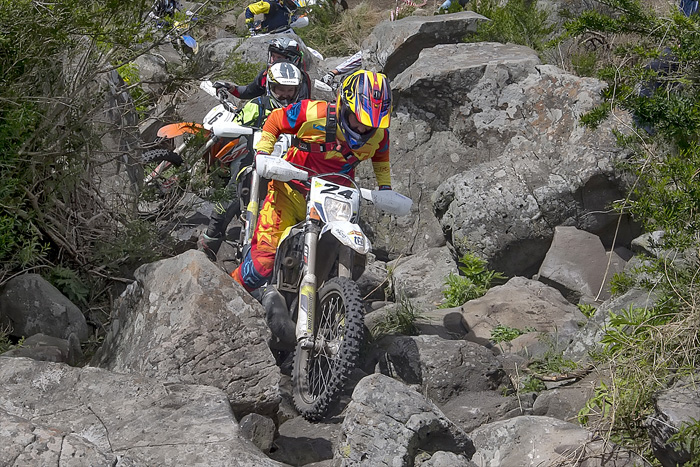 ‰ÛÏI am Pretty stoked with how I went, I haven't been riding all year because I haven‰Ûªt had a bike, so to come in 2 minutes behind Phillips who has been racing the World Enduro Championships all year after three hours is good." Harper reflected.

"The guys who have been racing all year, their fitness has been right up and they‰Ûªve been in the know, so I reckon with more training I could do well.

"The Husky was awesome. It was full stock, I just put a pipe guard and rear disc guard on it - the rock sections were so gnarly that even the trials riders were struggling in them - but that was about it. Suspension and engine were stock.

"The suspension was perfect for the rocks, real plush and wasn't deflecting off everything so it preserved your energy a lot, and the power was smooth as, especially on the tricky rock sections. Your back wheel would be about to slide down the face of a rock, and you could put it in a high gear and torque the power and just slowly get the grip you want.

"Glen from Moto GC has generously allowed me to take this bike home for a little while and I‰Ûªm working on some stuff for next year so hopefully something will come off.‰Û