Daniel Sanders adds A4DE title to his list of 2016 achievements 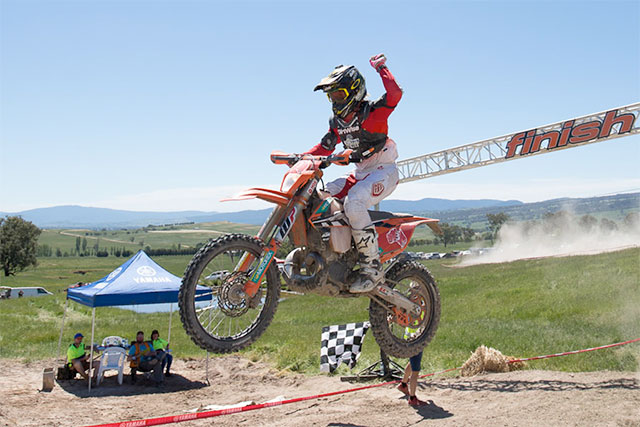 Sanders rode his KTM 300 EXC to victory in the E3 category, defeating Lachy Stanford by a shade under 15 seconds after winning the day's final motocross, with Lyndon Snodgrass finishing third.

At the back end of a stellar year in which he finished second outright against the best enduro riders in the world just a month ago at the ISDE in Spain, Sanders had hoped for a much higher outright finish than the fifth he secured yesterday.

However, a significant head knock at the previous weekend's Wildwood Extreme hard enduro and a setup error to his powerful two-stroke got his week off to a slow start, and a torn ligament in his ankle on day two did little to help the matter.

‰ÛÏI mixed up on a couple of things with the settings that I run, and we missed out for the first two days and I wasn't really right in the head about it," Sanders explained.

"I started to get some confidence back in my riding on day three when we figured out what the problems were, but I tore a ligament in my ankle on day two, and just had to bite the bullet on day three. I was 20 seconds down by that stage, so I just focused on getting the class win, and we got there in the end after a really good final moto.

"A bit of my fault that I didn't pick up on some things early enough, and it probably wasn't the best preparation knocking myself around at Wildwood the week before. I didn't finish the season off the way I would have liked to, but to have a really bad four-day and still win a class, you can't really complain," he concluded.

Ben Grabham ‰ÛÒ KTM Enduro Racing Team Manager, added. ‰ÛÏChucky went into the final moto today coming second in E3 and rode amazingly well in the worst conditions ever to get through the dust and win his first E3 championship at the four-day. In the outright scheme of things I know he was capable of doing much better, but in saying that he‰Ûªs had an amazing year and I think lots of little things all added up on him and we didn't see the best of what he could do in the first few days, but he slowly got back there. I'm sure he will live and learn and move on to bigger and better things."