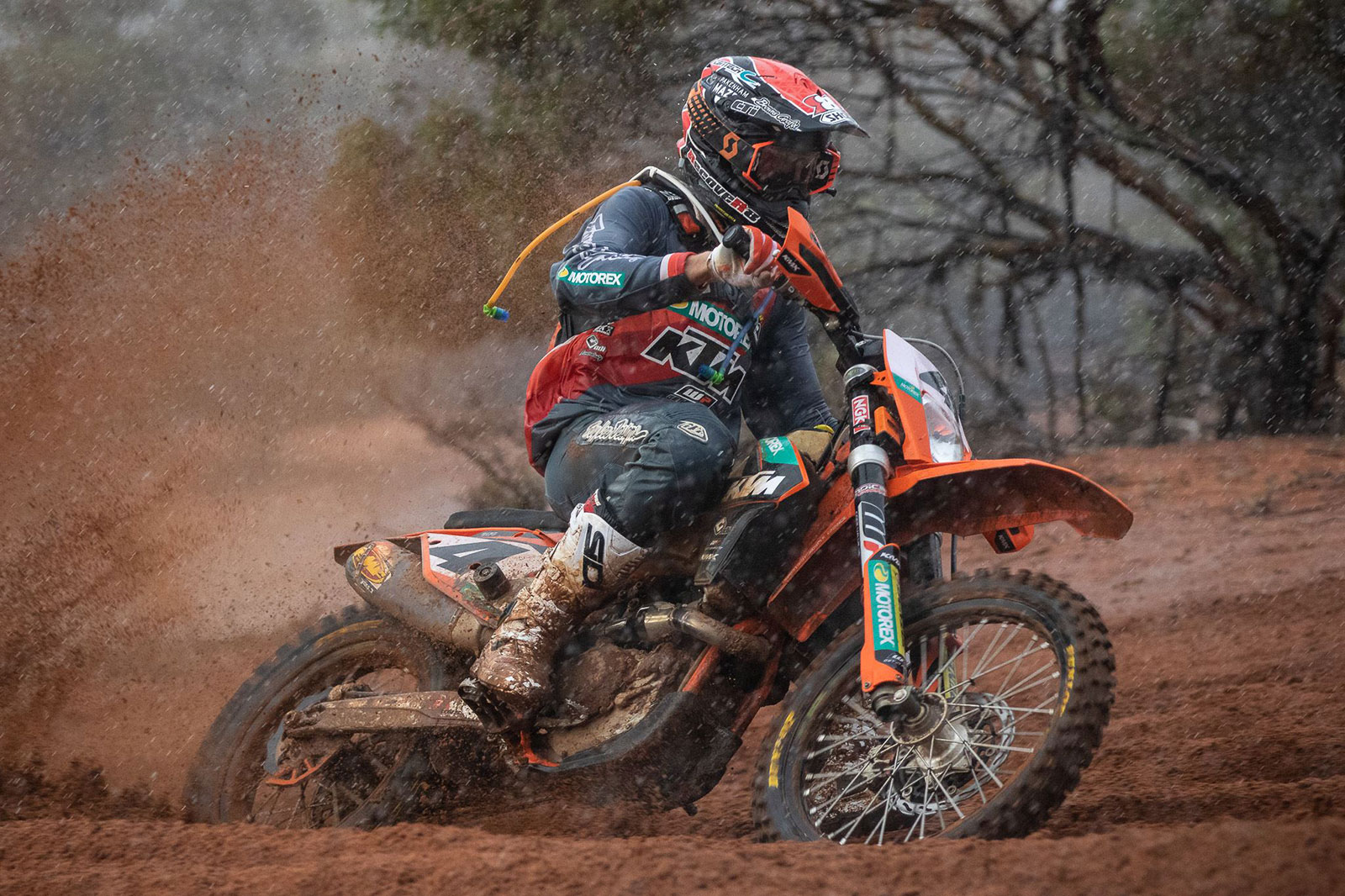 Daniel Milner. Photo: John Pearson Media
Victorian Daniel Milner has won the 2019 Penrite Hattah Desert Race after the race was called four laps in after torrential raon made access to the track impossible for safety vehicles.

Contested in difficult, muddy conditions after rain arrived on Sunday morning, Milner claimed his second-career Hattah victory and also clinching the Over 450cc 4-Stroke class win in the process.

This year's race was declared halfway following four laps of the 37-kilometre course because of the treacherous weather. Milner was able to complete the race in 2h 14m 22.051s, reaching the chequered flag 3m 21.159s ahead of teammate Snodgrass.

Milner's effort was even more remarkable since he has been recovering from a broken collarbone sustained six weeks prior to Hattah, as well as tendonitis, limiting his seat time in the lead-up to what is recognised as one of the most gruelling races in the sport.

"It's such a good feeling to win Hattah after breaking my collarbone six weeks ago and undergoing surgery before I then had tendon problems in the opposite arm once I was back on the bike," Milner explained.

"I'd only had four days on the bike and one day of testing, so to bring it home is an unbelievable feeling and the KTM 500 EXC-F is such a weapon to ride! Things went our way in the race and we didn't miss a beat - the bike was very similar to how I rode it last year in terms of set-up. It really was a matter of making sure we could get through the race and it became a case of survival, so I was being as consistent as possible. The decision to cut the race short was the right one in those conditions and I'm really happy to get another outright win here, that's for sure."
Snodgrass also put forward a phenomenal ride to not only claim an outright podium with second, but also comfortably score the 251cc-450cc 4-Stroke class win over eight minutes clear of his closest rival.

"Today was a crazy one with all that rain coming down, making it a really tough mud race in the desert, so to finish second outright and first in class was definitely awesome," Snodgrass said.

"The Prologue was important and we did well in that, so today I tried to have the cleanest race possible all the way through to the end - it was a matter of survival in those conditions by the time we got to the last lap and especially towards the end. The KTM 450 EXC-F was faultless all weekend and we managed to get one position better than last year, so I'm rapt with that result."

Yamaha's Josh Green rounded out the podium ahead of Lachlan Terry and Mason Semmens.

After e blistering start, 2018 winner Daniel Sanders was on his way to what looked like a repeat win until prevalent water caused a suspected problem with the electrics, forcing him to stop and fix the issue. Despite losing around 20 minutes, he went on to claim 14th position outright and seventh in the Over 450cc 4-Stroke category.

"It's very disappointing because the team and I put a lot of effort into this one event each year," Sanders said. "Obviously the weather today played a part and we started strongly, but unfortunately, the issue meant we gave away the win because I felt as though the race was mine at that point. The track was full of puddles because of the rain falling and we were hitting them at high-speed, so that could have led to the problem. We ended up getting going again and I brought it home to the finish, but it wasn't to be today."