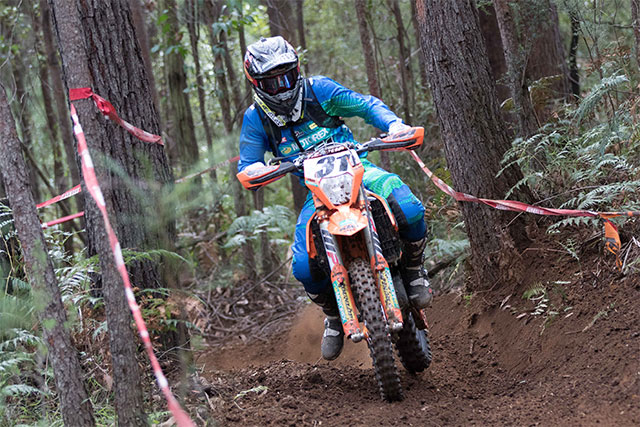 With the track conditions being optimal through the picturesque alpine and woodland areas near Rawson VIC, the Yamaha Australian Off-Road Championship (AORC) was treated to a spectacular cross-country battle between the major competitors. Daniel Milner for the KTM Enduro led from the front to claim E2 victory.

It was KTM Enduro Team Rider Lyndon Snodgrass who led the E3 pack around the track. Snodgrass was impressive with a total time of 3:01:59.833. Lachlan Stanford for Husqvarna Enduro Team managed a consistent ride throughout the cross-country race to finish in second with his total time of 3:02:26.722. Ahead of third placed KTM rider Tom Mason who concluded the day with a 3:06:42.151 time, managing to snatch third position from Active8 Yamaha Yamalube Racing Team‰Ûªs Beau Ralston.

KTM mounted Daniel Milner managed to finish top of the for the E2 class at Rawson. Milner finished the race with a total time of 3:00:53.102 Following close behind was Active8 Yamaha Yamalube Racing Team‰Ûªs Joshua Green with his total lap time of 3:03:27.852 and third for the day was Yamaha's Stefan Granquist with his time of 3:06:35.344, rounded out the top three.

Milner was ecstatic to make such a triumphant return to Yamaha AORC and shared his thoughts after taking the E2 victory this afternoon; ‰ÛÏWe went out there and charged to finish to end the day on top. I‰Ûªm very happy with the team, the effort was unreal and the bike setup was spot on. The track got really rough with sharp edge terrain. Overall it was a good day for us and all that effort over the off-season is starting to pay off.‰Û